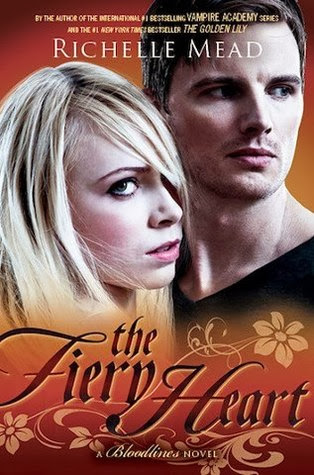 I just love Richelle Mead. I loved Vampire Academy. I love Adrian, Sydney, them together, Eddie, all the characters really. I love this spin-off series. And well The Fiery Heart just makes it all that much better. The Fiery Heart is definitely the best in the series so far. And I can’t wait to see how it fits into the entire series as a whole. Richelle Mead likened The Fiery Heart for Bloodlines to Shadow Kiss for Vampire Academy. She said that what Shadow Kiss did for the Vampire Academy series, The Fiery Heart will do for the Bloodlines series, and I can totally see what she means. Obviously, the books aren’t mirror images, as a matter of fact, they’re quite different. But I think what she meant by that was that Shadow Kiss took Vampire Academy to the next level with the storyline and the characters, and that’s exactly what The Fiery Heart has done for the Bloodlines series. Where things have been a little slower paced for the series up until this point, I can totally see how everything from here on out will be faster paced and more intense.

Without getting into too much detail, The Fiery Heart was a really sweet book. Sydney’s made her choice in The Indigo Spell. She’s overcome her Alchemist hangups, and she and Adrian are officially a couple. And well, just witnessing that was beautiful. It was fun. And it was sigh-worthy. Though Richelle Mead avoids any graphic detail in The Fiery Heart, there are several physical scenes—to the point where I’m not sure what age group I would feel comfortable recommending this book. But don’t be confused, everything’s not perfect for Sydney and Adrian because, now more than ever, they have to go through so much effort to keep their relationship a secret. And as any reader would suspect, this is made more difficult by the addition of Sydney’s younger sister, Zoe, joining the Palm Springs team. Zoe has something to prove—that she can be just as good, if not better, of an Alchemist as Sydney has been.

Sydney is every bit the leading female that Rose was from Vampire Academy. Where Rose is all brute force and smart mouth, Sydney is cunning, smart, and all finesse. Sydney takes care of business. She takes care of everyone else. But she’s being pulled in too many directions these days. She has the Alchemists mission. She has her witchcraft. She has a new and rapidly developing relationship with Adrian. She has found friends in the other Moroi and dhampirs in the group. She has the resistance to the Alchemist mission with Marcus Finch. She has her parents upcoming divorce and custody battle of her younger sister. And she of course is trying to balance a dangerous line with being a sister and being free to pursue all of her side interests that Zoe can’t know about. It’s inevitable that Sydney will become overwhelmed with all of her responsibilities.

Adrian finally gets everything that his fans have been hoping for throughout both Vampire Academy and Bloodlines. People hated the way Rose treated him. While I do NOT approve of Rose’s treatment of Adrian, I was always a Rose and Dimitri fan. And I firmly believe that Adrian needed to go through that experience with Rose in order for him to be in the right place and frame of mind to be ready for Sydney and his relationship with her. Adrian really comes into his own. He struggles with battling his persona of bad boy, slacker with who he wants to be for Sydney. He wants Sydney to have the world. And of course, he wants to be the one to give it to her. Adrian shows how essential he is to the Moroi as a whole, to Sydney as a partner, and just in general. He makes some difficult choices, and he grows more in this book than probably any other. Yet he’s the same old Adrian that we all fell in love with way back when he showed up on a porch in the middle of Strigoi crisis back in book 2, Frostbite, of Vampire Academy.

The secondary characters continue to grow on me. I’d absolutely LOVE for Richelle Mead to write from Eddie’s POV! Give Eddie his own spin off series! PLEASE! He’s been such a staple throughout both Vampire Academy and Bloodlines. I just love him! He’s so loyal. He’s intense. He’s just trying to be the best guardian he possibly can. And we of course have Jill, who I’ve grown to like more. She still makes some decisions that I think are indicative of her young age, but overall she’s growing on me. Angelina is still as whacky as ever—though she has a much smaller role. Trey. Jackie. The addition of Neil to the group. He was okay. A bit intense. He has a purpose to serve and he does so willingly and with conviction. And then we even see almost all of our favorites from Vampire Academy. Rose, Dimitri, Christian, Lissa, and even Sonya make appearances. I hated the way that Rose sees Adrian—how she can’t see his growth and seems like she’ll always see him as some slacker, but it makes sense that she does see him that way. I loved seeing Lissa’s interaction with Adrian as they were always close but in a completely different way than the others. They bond over Spirit, which totally makes sense. but you can tell how much Lissa cares for him.

And then there’s Zoe, of course. She deserves her own paragraph because she has a much bigger role within the book as a whole. On the one hand, I feel really sorry for Zoe. She’s trying so hard to find her father’s approval. Unfortunately he’s one of those that doesn’t hand it out easily—if ever really. So she’s fighting an almost impossible battle. And because she craves that so much, she’s driven to make bad decisions in order to please him. She feels so lonely, and that’s an aspect that I can relate to. Her sister is there, right beside her, but yet so far away at the same time. Sydney doesn’t agree with Zoe on almost anything at this point—whether Zoe intellectually knows it or not, she can definitely feel the divide between them. She’s surrounded by people she’s afraid of and trying her best not to get close to. And then her parents are getting a divorce, which is enough to tear at the heart of any child, much less one who is thrust so specifically in the middle and used against one parent. I hated what all she was going through—I felt sorry for her. Yet at the same time, I despised her weakness. Truly Zoe just needs to come into her own as a person. Hopefully we’ll see some growth out of her in the coming books.

I almost feel like I can’t fully rate The Fiery Heart until I see how the rest of the series plays out. I need to know how crucial it is to the evolution of the series as whole. Yet, because I can’t know that yet, I’m going to go with a very merry 4.5 Stars. I loved the romance between Sydney and Adrian. I thought the conflict of trying to balance it all was well done. And in true Richelle Mead style, we’re left at a semi-cliffhanger, and I’m dying to know what happens next.

Have you read The Fiery Heart? What did you think? Let me know!