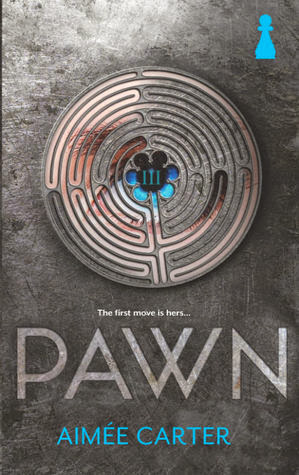 Goodreads description--YOU CAN BE A VII. IF YOU GIVE UP EVERYTHING.

For Kitty Doe, it seems like an easy choice. She can either spend her life as a III in misery, looked down upon by the higher ranks and forced to leave the people she loves, or she can become a VII and join the most powerful family in the country.

If she says yes, Kitty will be Masked—surgically transformed into Lila Hart, the Prime Minister's niece, who died under mysterious circumstances. As a member of the Hart family, she will be famous. She will be adored. And for the first time, she will matter.

There's only one catch. She must also stop the rebellion that Lila secretly fostered, the same one that got her killed …and one Kitty believes in. Faced with threats, conspiracies and a life that's not her own, she must decide which path to choose—and learn how to become more than a pawn in a twisted game she's only beginning to understand.

Pawn starts out similar to books like The Hunger Games and Divergent where you’re introduced to this completely different world order and social hierarchy. It was really fascinating to see how Aimee Carter designed her world. Each person when they turn 17 takes this test. The results of the test place you within a category from I to VII. All of the questions and criteria that the test looks at wasn’t spelled out in detail within Pawn, but it appears that intelligence and reading comprehension play a part. Similar to an IQ test maybe? At least that's the feel you get from it. Ranks I through III are really considered lower class. IV is considered average or middle class. And V or VI is considered higher class. VII is unattainable—only the ruling family of the nation has this rank and it’s given to them by birth, not earned. What rank you get determines what kind of job you have. What kind of job you have really determines how well fed and taken care of you are. It seems like a complicated but simple system all at the same time. The thought process behind this testing is to get the right people in the right jobs so that everyone is contributing as effectively as possible to society, to the economy, and to the government. Unlike Divergent or The Hunger Games where it takes until the end of the first book or even the second book entirely, Pawn turns political rather quickly. I mean the series is titled The Blackcoat Rebellion afterall--of course the focus is going to be on the uprising and overthrowing of a corrupt and flawed government system.

Kitty is our leading female, and well she didn’t score as well as she hoped on the test which starts off a whole mess of desperation and thoughtless acts. While I found it really hard to wrap my head around the course of action that Kitty chose to take as a result of her new ranking, I guess it was the catalyst needed for the actions to follow. I didn’t feel like Kitty’s situation was as desperate as her actions called for, but I wasn’t writing her off at that point either. Despite her initial flawed thought process and a couple of hiccups throughout the book, Kitty was a fairly likable main character for me. One characteristic that stuck out to me about her that I just loved was how Kitty refused to let assumptions get the better of her when it comes to other people and their motives toward her. I could just see a dozen other YA female leads throwing a variety of tantrums had they been faced with the same information that Kitty was faced with, yet she kept her cool. Applause to her and kudos to Aimee Carter for that.

Similar to Partials by Dan Wells, Pawn starts out with an existing romantic relationship between Kitty and her longtime boyfriend, Benjy. In Partials, I never really felt the connection between Kira and Marcus and it was therefore pretty easy for me to let go of the idea of them as a couple. However, Aimee Carter did a decent job establishing a connection between Kitty and Benjy in the very beginning and I was sure I would continue to root for them as a couple throughout the book. Unfortunately, I’ve found that while I appreciate the uniqueness of an already established relationship in a world of books surrounding the process of falling in love, I’m not always as set on the relationship surviving because I didn’t witness it’s establishment and am not as emotionally connected to the relationship myself as I would be if I had read about how the two came together. For Pawn, I thought I would be able to hold on to hope for Kitty and Benjy, but when a potential third party entered the picture I began to feel confused. It felt obvious who Aimee Carter was trying to point me, as the reader, towards, but I wasn’t sure I was buying it (which reminded me of Sophie Jordan’s Firelight series). And in the end, I really just wasn’t sure who I was rooting for.

Pawn had some aspects that stretched my imagination just a bit too far. The concept of being Masked is neat, but seems impossible, even with copious amounts of money and technology that we just don’t have today. I tried not to let this keep me from enjoying the book, but it was definitely noted, and I can see where other readers might have a hard time getting past such things.

Pawn was a good first installment to a new series, but I wasn’t blown away. There were some twists, but I found them mostly predictable. Sci-fi and Dystopian fans would probably be the ideal fan of Pawn, but I wouldn’t expect them to be sold completely based off the first book. I do plan to continue reading the series at this point, but whether I finish it or not will definitely depend on how well book 2 survives the typical book 2 curse. Pawn gets 3.5 Stars from me. Have you read Pawn? What did you think? Let me know!