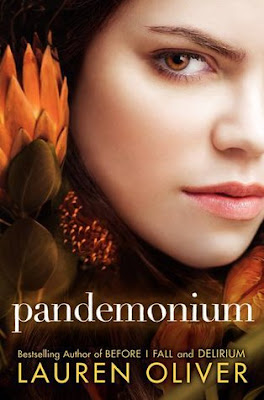 *Note: The above links to Amazon, The Book Depository, and Booksamillion.com are affiliate links. Affiliate links support giveaways for Somewhere Only We Know.

Lauren Oliver delivers an electrifying follow-up to her acclaimed New York Times bestseller, Delirium. This riveting, brilliant novel crackles with the fire of fierce defiance, forbidden romance, and the sparks of a revolution about to ignite.

Remember when I raved about Delirium? I LOVED that book! Great story. Great characters. Great writing. Just SO GOOD all around. Well when I saw that Pandemonium was on sale for $0.99, I HAD to jump on it. Granted, this was the Enhanced Ebook version NOT the Kindle version (which is $8.99--tell me if that makes sense). I will say really quickly about the enhanced ebook version...this version has video content included which is super cool. However, only certain devices will handle this content. My first generation Kindle Fire does not. As a matter of fact, no device that I have handles the extra content. So that was a bit discouraging. However, it's still much cheaper than the regular kindle version.

Now about the story itself....

Pandemonium picks up pretty much right where Delirium left off. Alex and Lena have been separated because Lena made it to the Wilds and Alex is stuck on the other side. Lena finds that through the adrenaline of her escape she's missed the fact that she was grazed by a bullet. Now that things have calmed down a bit, the wound really begins to take it's toll on her. A group of Invalids stumble upon her and take her in to help her get back on her feet. What she finds is a new family.

Pandemonium isn't told chronologically. It bounces back and forth between "then" and "now". While I really do think this was the best approach for telling this portion of the story, I can't say I loved this part. I don't know, I'm not normally a huge fan of books that jump around in time like this. It just depends.

Lena is still a strong character. She's come so far from where she was in Delirium--a scared, rules-following girl. Now she's angry and bitter and sad. She's lost so much. Her mom, Hana, Grace...Alex. And Lena uses these losses to fuel herself. She becomes part of the resistance, because really, how could she not? And she finds herself tailing the face of the opposition (or at least, the youth's version of the opposition) in order to uncover as much information about their plans to begin dolling out the cure for the deliria to children under eighteen, who have previously been designated as dangerous candidates for the cure. There's a reason the scientists aren't performing the procedure on children under eighteen.

Now I need to take a minute and discuss how I accidentally stumbled upon a spoiler that completely changed the way I experienced this book--or changed how I would have experienced it. A Top Ten Tuesday topic a while back was Top Ten Beginnings/Endings and I stumbled upon a quote that happens to be the last sentence--a one word sentence--of this book. Totally my own fault as the post had "potential spoilers" listed clearly for me to see. But I pressed on, not expecting to find a book I haven't read or one I wanted to read. For those of you who have read this one, you know what a game changer that was. For those of you who haven't read it...well I don't want to say too much. GAME CHANGER. I won't say that spoiler "ruined" Pandemonium for me, but I read the entire book with the knowledge of that one word being the very last sentence coloring every page and every scene. That resulted in a lack of attachment in places where I probably would have otherwise been attached and attachment in places where I probably otherwise wouldn't have paid much attention. And obviously as spoilers typically go, I found myself extremely frustrated watching this inevitable collision course that I couldn't prevent or change.

I do want to say, as vaguely as possible, that Lena makes a huge assumption throughout the whole of this book that drove me batty. Everyone knows the deal with assumptions, right? Well being the reader of many books that I am, I know from experience that what the character believes is fact isn't always fact. And that if you don't witness "things" for yourself then you can't go assuming. This might have been more of an issue for me because of the spoilage mentioned above, but I'm 100% sure this would have been something I picked up on regardless of knowing that last sentence ahead of time. What really frustrated me about this assumption is that Lena's already lived this experience once. Slightly different circumstances, but still, I would have expected her to have learned this lesson already.

Pandemonium had a few too many moments where something major was about to happen only to be saved at the very last minute, but I can overlook that because Lauren Oliver's writing style still completely captures me. She's poetic, and lyrical, and I found myself highlighting ginormous chunks of passages. I think perhaps Delirium was still slightly better in this aspect than Pandemonium, but maybe that's because I listened to Delirium on audiobook whereas I read Pandemonium and hearing this poetic writing and sometimes complete desperation from Lena out loud enhanced the overall experience for me. Mark this series down as one where the audiobooks might trump reading them.

My favorite quotes (not listing page numbers or locations, sorry):

"I am not born all at once, the new Lena.
Step by step--and then, inch by inch.
Crawling, insides curled into dust, mouth full of the taste of smoke.
Fingernail by fingernail, like a worm.
That is how she comes into the world, the new Lena."

"Love, the deadliest of all deadly things.
Love it kills you.
Alex.
Both when you have it.
Alex.
And when you don't.
Alex."

"Grief is like sinking, like being buried. I am in water the tawny color of kicked-up dirt. Every breath is full of choking. There is nothing to hold on to, no sides, no way to claw myself up. There is nothing to do but let go.
Let go. Feel the weight all around you, feel the squeezing of your lungs, the slow, low pressure. Let yourself go deeper. There is nothing but the taste of metal, and the echoes of old things, and days that look like darkness."

"I read once about a kind of fungus that grows in trees. The fungus begins to encroach on the systems that carry water and nutrients up from the roots to the branches. It disables them one by one--it crowds them out. Soon, the fungus--and only the fungus--is carrying the water, and the chemicals, and everything else the tree needs to survive. At the same time it is decaying the tree slowly from within, turning it minute by minute to rot.
That is what hatred is. It will feed you and at the same time turn you to rot.
It is hard and deep and angular, a system of blockades. It is everything and total.
Hatred is a high tower. In the Wilds, I start to build, and to climb."

Pandemonium gets 4 Stars from me. I have that frustration of "I can't wait to get my hands on Requiem so I can find out what the crap happens next" thing going on. I need to know what happens next NOW! Have you read Pandemonium? What did you think? Let me know!