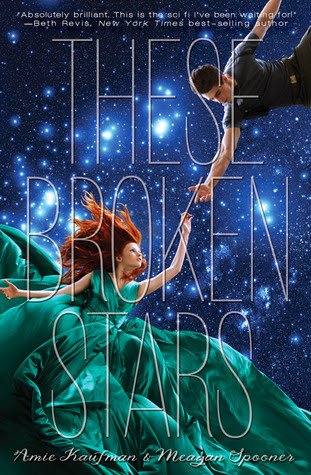 Goodreads description--It's a night like any other on board the Icarus. Then, catastrophe strikes: the massive luxury spaceliner is yanked out of hyperspace and plummets into the nearest planet. Lilac LaRoux and Tarver Merendsen survive. And they seem to be alone.

Lilac is the daughter of the richest man in the universe. Tarver comes from nothing, a young war hero who learned long ago that girls like Lilac are more trouble than they’re worth. But with only each other to rely on, Lilac and Tarver must work together, making a tortuous journey across the eerie, deserted terrain to seek help.

Then, against all odds, Lilac and Tarver find a strange blessing in the tragedy that has thrown them into each other’s arms. Without the hope of a future together in their own world, they begin to wonder—would they be better off staying here forever?

Everything changes when they uncover the truth behind the chilling whispers that haunt their every step. Lilac and Tarver may find a way off this planet. But they won’t be the same people who landed on it.

The first in a sweeping science fiction trilogy, These Broken Stars is a timeless love story about hope and survival in the face of unthinkable odds.

I wasn't really sure what I was going to get into with These Broken Stars. I don't think of myself as being a big science fiction fan, but I've been surprised by enough books to be open to the genre. And well These Broken Stars lived up to everything I hoped it would.

These Broken Stars alternates POVs between Tarver and Lilac. And I have to say that right off I could tell I was reading from a male perspective even though none of the words specifically said...until well they did. I was immediately impressed with the writing that could tell me without telling me that I was reading from a male's POV. One of the things I always look for when reading books with multiple POVs is whether or not the characters have a distinct voice. And they definitely do.

When we're first brought into this story, our characters are aboard a giant spaceship that I really looked at as kind of like a cruise ship--probably because of the reference to the Promenade deck. Where some people might turn their nose up, I found this helpful for picturing the characters' surroundings. Of course I wasn't picturing the 70s orange or red carpet often found on cruise ships but a much more black, silver...metal themed decor.

Of course, the Icarus doesn't stay in space through the whole book. As the description above states, the Icarus crashes onto a planet that appears no one really expected to be there. It would seem a little too odd and predictable that our two main characters are the only ones who survive this crash, but the authors did a great job formulating a feasible reason for this.

Speaking of characters, I guess I should really discuss them. Tarver's a war hero. He's young to be such, but he's proven himself in the field. We don't get as much of his military background story and I hope that this is fixed with the other installments in the series. Lilac's history is a little more flushed out. Her father happens to be the richest man in the entire universe. And because of this, Lilac faces the typical conflict of everyone wanting something from her. Men want her money. Women want her status. The poor want her to take their ideas to her father, and the rich want to parade her about. She hates this, but she doesn't quite know how to escape it either.

I didn't quite blow through this book. I had to stop and put it down for various reasons, but every time that I did I kept thinking about it and wanting to come back to it. The writing kept me intrigued. Twists and turns in the plot kept me guessing. Things really picked up in the last 25%. And events take place around the 75% mark that had me biting my nails. It was at this point I was completely unable to put These Broken Stars down until I devoured every page.

Ultimately, I really enjoyed this one. While reading it, I kept thinking that it kind of reminded me of Under the Never Sky. I can't quite point out why, but I think fans of Under the Never Sky will enjoy These Broken Stars as well. Definitely putting book 2 on my radar to pick up as soon as I can.