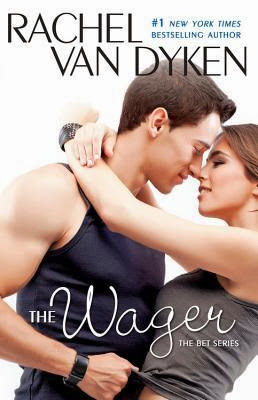 Lose a bet, lose your heart...

What is it about a junior-high crush that can send an otherwise intelligent woman into a tailspin? TV reporter Char Lynn wishes she knew. Jake Titus is too rich, too handsome, too arrogant: a trifecta that once lured Char into the best night-and worst morning-after-of her life. Now they've been thrown together in a wedding party. It's awkward, but survivable . . . until Jake stops acting like a jerk, and starts acting like the man she'd always hoped he could be.

If watching your brother marry your best friend is weird, being attracted to your best friend's other best friend is downright bizarre. Unfortunately for Jake, Char hasn't forgotten how he once tossed her aside. Worse still, Jake's already-nutty grandma is even crazier about Char. Cue meet-cute shenanigans and all manner of meddling, and somehow, Jake's falling. For Char. Now all he has to do is make her believe it . . .

Oh boy…here we go. *deep sigh* So I enjoyed The Bet, right? However, there were some flaws. There’s the clichés from the whole faked engagement between Jake and Kacey, and there was the playboy character of Jake. However, I said in my review of it that the redeeming quality of The Bet was Travis. But here’s the thing…while Travis is present in The Wager, this book is mostly about Char and Jake—the playboy cliché from book 1. UGH! And well…”ugh” is right. You guys, I did so much eye rolling, frustrated sighing, angry highlighting and note taking with this book. It is seriously not even funny. Here’s why: (****Fair warning, I need to vent about this one so bad that there will be spoilers below. It can't be helped. Proceed with caution. You can always check out my bold bullet points to see what I’m frustrated with and skip the details if you don’t want this one spoiled for you.****)

We’ve got the clichés I mentioned above. Rachel Van Dyken describes Jake as “walking sex” which is so overused as a description in the NA genre that it is simply ridiculous. Not to mention that this description is just ridiculous anyway. Jake using Kacey’s parents’ deaths as an excuse to behave like an imbecile “because people always leave.” (*Location 386) Self-Wallowing/self-pitying characters (Location 896)—again Jake. I know it's hard to come up with new topics, plot lines, characters, situations, descriptions, etc, but please...please can we do better than this?

I briefly mentioned this is my review of The Bet, but I just don’t feel like Rachel Van Dyken really knows her characters or their backstories as completely as she should. From a general level it’s so unbelievably hard to stretch my imagination into believing that Jake the playboy DB from book 1 who basically plans on getting married to his longtime best friend but premeditatedly expects to have a mistress at the same time all of a sudden finds the one girl in the entire world worth settling down for. Despite how frequently he fixates on Kacey in book 1, all of a sudden in this book “it has always been Char”……………really?????? Not even.

On a more specific level, it’s confusing how Kacey tells Travis at the end of The Bet that she knows just the person to hook Jake up with. Considering Char is the only other person not related to Jake that Kacey could possibly be talking about, how does it make sense that Grandma is the one playing matchmaker with Jake and Char and Kacey and Travis are working against Grandma and trying to hook Char up with Jace? This doesn’t make any sense. It makes me want to bang my head against the wall. But wait…there’s more…

Jake conveniently all of a sudden remembers every detail about his night with Kacey discussed in much detail in book 1 despite never eluding to remembering more (Location 360). Location 1338 says that Jake was still bullying girls he liked which doesn’t make any sense because Travis was the one to bully the girl he liked and book 1 clearly shows that Jake is aware of Travis’s bullying game not being what attracts a girl. Jake asks Kacey if she remembers a turtle that he gave her once (Location 1485) and she’s all like “Yeah best gift ever,” despite telling Travis that the picture of her parents that was initially Travis’s gift to Kacey but Jake stole and gave her was the best gift ever and she cried into it after finding out that her parents died. So yeah…I’m going to go with emotional picture over dumb turtle any day.

I would often times get confused from one narrator to the next with who's narrating. I need the characters' voices to be distinct enough that they're easily differentiated.

Jake denies having feelings for Char and surprise Char overhears (Location 1418). Bet you couldn't have guessed that would happen. Especially as this plot point was so similar to book 1, The Bet, when Kacey overhears Travis making a similar comment. Jake had a one night stand with Kacey in The Bet. Jake had a one night stand with Char in The Wager. Grandma plays matchmaker in both books, which is the best part of this one despite being repetitive. Then after being so against commitment of any kind for pretty much forever, Jake jumps onto the marriage bandwagon so fast it's not even laughable. Travis was always more serious, so the marriage idea wasn't as much of a stretch for him. The two stories are just too similar.

There are at least two references to The Hunger Games in this book and one reference in The Bet. Also, "He looked like Thor." (Location 2075) Really? That's your description? I'm pretty sure Thor is a mythological Norse god and therefore has not been seen even if there is a well known description of him. If the character is referring to Chris Hemsworth who plays Thor in the recent film adaptations, then well that's what she should have said. And then Jake proceeds to give the same character the same description, which goes back to point Number 2: Know Your Characters Better. I need the characters' voices to be different and distinct.

This happened more times than I highlighted , but here are a couple of examples. (Location 2269)

"Jace backed up and then threw a punch at Jake's face.

"And stay"..."away from Char!" Jake landed another blow to Jace's cheek, but Jace moved out of the way just in time for Jake to crash into the table, causing wine to spill everywhere."

This whole section is confusing because it says Jace threw a punch at Jake but then follows up by saying that Jake lands another blow to Jace's cheek. Can you see how I might be confused here? I feel like Rachel Van Dyken might have edited out a couple of punches landed which left me feeling like I missed something or misread. That or she was getting confused between Jace and Jake. The character names are too similar and add to the confusion.

Location 3104 (this one also applies to point Number 2: Know Your Characters Better) "her aversion to pickles or anything green." So I guess salad doesn't count as green? I mean maybe she doesn't like the color green, but add to that the pickles mentioned and one could conclude that she's averse to all green foods, which doesn't fit with her having a salad earlier. Also Location 2333-2338.

"Ah Travis, so rough around the edges and protective. That was why she was marrying him. He was the most attractive man she'd ever met, and he was going to be all hers.

Maybe I'm being too nit-picky at this point. But that's the dumbest reason I've ever heard to marry someone (see what I did there?). And my previously mentioned gripe about a turtle being the best present ever. If something is the "best," the "worst," the "only,"...etc then it had better match the absolute it is being given.

All this venting is pretty much summed up in the fact that I think Rachel Van Dyken was writing for the moment and not actually relaying a story that might have actually happened. The Wager gets 2 Stars from me. Have you read The Wager? What did you think? Let me know!