Before We Fall - Review 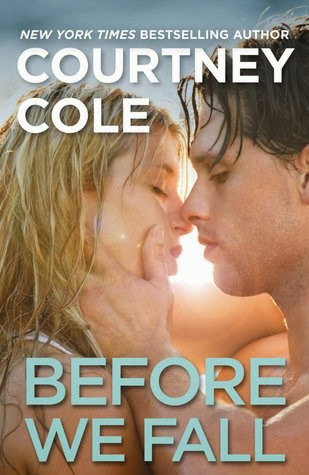 I found Before We Fall as a “read now” on NetGalley. I’d seen that several bloggers said they really enjoyed the first two books in this series so I picked it up—without even reading the description. Well this is one of those situations where I wish I’d done a little more digging before running off and picking these up. Of course, I didn’t want to read Before We Fall without having read the first two books in the series. So I got those for my personal kindle library. Well I didn’t review either one of those on my blog because of the content. And truth be told, I wasn’t sure I was going to review Before We Fall on here either because of the same reason.

The other two books in the series should have prepared me somewhat for Before We Fall…but well…they just didn’t. Not really. Courtney Cole has focused this series about characters who are “broken” and really with the idea that all people are broken. Specifically her characters have some really dark places in their pasts and in their lives. While I haven’t reviewed the first two books just briefly I’ll illustrate what I mean. Pax from If You Stay witnessed his mother’s murder when he was young. Traumatized by it, he block the memory yet knows something dark is inside him and tries to drown it with alcohol, drugs, and meaningless sex. Mila’s parents were both killed in a car accident several years back, but her father had temper problems and occasionally was abusive towards her mother. Gabriel from If You Leave was an Army Ranger stationed in Afghanistan. On one of his missions several of his unit get killed and injured. He blames himself, of course. And Madison being the older sister of Mila witnessed much more of her father’s abuse than Mila did. And without going into detail so as not to spoil Before We Fall, Dominic and Jacey have some dark moments in their pasts as well. Dominic more than Jacey. Jacey’s story is touched on in If You Leave (book 2) through her sibling relationship with Gabriel and her friendship with Madison. Therefore, Before We Fall really focused more on Dominic darkness.

While none of the characters have really dealt with their pasts and issues in the most healthy of ways, Before We Fall feels darker than the other two books with the way that Dominic chooses to cope. Granted drug use is no picnic with rainbows, cotton candy, and unicorns, but drug use is so common that it doesn’t always feel as heavy as it is. Dominic’s chosen coping mechanism isn’t one that I’ve exposed myself to…ever really. Though I haven’t read this book, Fifty Shades of Grey comes to mind when I think about Dominic’s coping. That ought to kind of give you a glimpse into what we’re talking about here.

Before We Fall made me uncomfortable in many places. The redeeming part of these books comes from the character growth, how these characters help each other to learn more healthy ways of dealing with their pasts and the pain they feel. I’m a firm believer in trying to grow from all experiences…and even I can extract a lesson from a book that makes me uncomfortable. In one scene, Dominic and Jacey visit the Grand Canyon. Jacey makes the comment that the Grand Canyon makes her feel so small. And well that’s exactly what it was designed to do. I’ve mentioned this verse before, but it comes back to me again here. Romans 1:21 – “For since the creation of the world His invisible attributes are clearly see, being understood by the things that are made, even His eternal power and Godhead…” God’s creation declares Him the Creator. It puts things into perspective for us every time. HE is so big, and we are so small. Creation screams “I was created by an infinite and enormous God.” And what these characters need to heal more than anything is God. Of course, that’s not exactly what they find, but I enjoyed the growth in them nonetheless.

Before We Fall does follow the typical new adult genre patterns. You’ve got the male lead who uses and discards women. You’ve got the female lead who knows better than to get close to the male, but does so anyway. You’ve got the scarred pasts. You’ve got unhealthy coping. Said male changes all of his dark and twisted ways, corrects his unhealthy coping, and falls for the only girl in the world who could make him do so. And particular to this series, you’ve got the beautiful wrapping and bow to put on the resolution and ending. If You Stay, If You Leave, and Before We Fall all have an almost identical ending. All of which are a little too “pretty” for me.

One last thing before I wrap this up. Can someone please explain the title for me? The book discusses (and the description above) this concept of “before we fall, we fly.” But that just doesn’t make a lot of sense to me. It seems to me like it should be “before we fly, we fall.” Meaning sometimes we have to fall down, get hurt, etc, before we can pick ourselves up, try again, and actually make something of ourselves and our lives. But flying before we fall? What does that mean exactly? I feel like I’ll probably feel stupid when someone explains this to me, but for now…I’m at a loss. Any ideas?

Before We Fall was “okay.” It was cookie cutter, while also going outside of my comfort zone. I did enjoy the character growth, but I’m not sure I feel like I can actually recommend Before We Fall. I would give it 3 stars. Have you read Before We Fall? What did you think? Let me know!