Into the Still Blue - Review 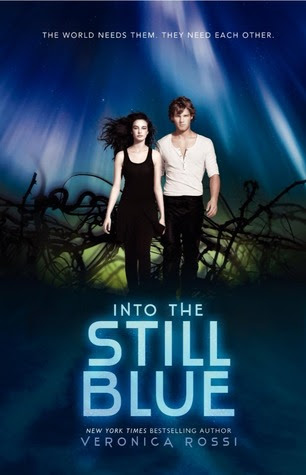 Oh *sigh*! The close of another series that I’ve really enjoyed. You guys I LOVED Under the Never Sky. Through the Ever Night was somewhat more of a struggle as book 2 in a series can be. But I would say that Through the Ever Night was better than many other book 2s that I’ve read. And lately I’ve been disappointed with several series enders so I was somewhat nervous about Into the Still Blue. But Veronica Rossi did me right.

Aria is one of my favorite female leads of recent books. She’s strong and opinionated. But she’s got a good head on her shoulders. She knows instinctively how to lead. And she learns from her mistakes. Yet she’s still vulnerable and just the right amount emotional. Perry has also learned from his mistakes. He’s a do-what-needs-to-be-done kind of guy. But Perry isn’t afraid of showing how much he cares—for Aria, for the Tides, for Roar. Whoever, whatever that has captured his heart is fair game. He does struggle with the line of trying to be in control of himself because of his emotions, but that just makes him all the more attractive to me.

As with the other books in this series, the secondary characters have such standout personalities and behaviors. I was attached to almost all of them. Soren and the other dwellers make progress in mixing with the Tides. Talon, Cinder, Willow, Flea…love those kids. Even Brooke. I loved the addition of Loran. He was one of my favorite characters in this book. Sable makes a perfect villain—someone you love to hate.

I really get wrapped up in Veronica Rossi’s writing. A few (HA!) of my favorite quotes:

Even the way he stood, weight to one side, like his entire life was out of balance.

He looked back, still walking, and pressed a hand to his heart.

In all her life, her heart had never hurt like this. Never

He'd said when. Even in his beaten condition, he believed in whens and not ifs. She never should have doubted his strength.

"Tell me," he said. "How is it that you've come to trust the Outsiders, and they you?" Aria shrugged. "I started with the right one."

They had practiced handing their worries back and forth.

"I could kill you silently if I wanted to."

The moment of absolute silence felt familiar, reminding Perry of when he'd slain Vale. Power felt tangible. Its shift unmistakeable. Something had just ended, and something had just begun, and every person there sense it: a change as startling and inevitable as the first drops of rain.

"You misunderstood. I'm not questioning him. I've always known who he is. What I'm questioning, thanks to a girl with a tooth-rattling kick, is who I am."

There were a few moments where the characters made some choices that had me frustrated. Roar, in particular, acting from a place of grief puts everyone around him in danger. But overall I was insanely proud of these characters ability to work with what they’re given. To make better choices when given a second opportunity. To continue to strive toward the goal of a new life away from the dangers of the aether. In the end, I think everything happened in Into the Still Blue exactly the way it needed to.