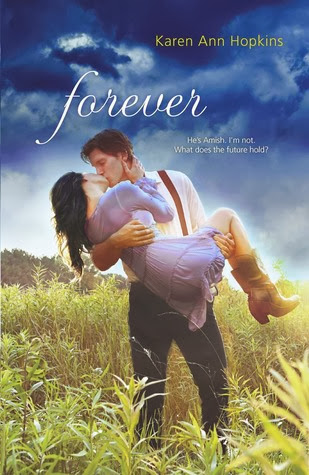 Goodreads description--All I want is my happily-ever-after.

From the day we met, the world has tried to keep Noah and me from being together, but now that I'm carrying his child, no one will be able to tear us apart. Or so I hope. But Noah and I have made some mistakes along the way, and the consequences are impacting the people we love. Worse, there's a storm on the horizon, and it's sure to cause serious devastation.

If we can get through this, we'll finally be Rose and Noah; a family, forever.

But first we have to survive the road ahead. And happily-ever-after is a long way off.

If you remember from my reviews of Temptation and Belonging, I’ve had some frustrations with this series. My initial frustrations in Temptation centered around Rose’s ignorance concerning the Amish culture and how both Rose and Noah had the desire to change the other into what they wanted. In Belonging these issues were compounded. Because Rose was working to become Amish, her feminist views collided with the Amish way of life. She waits entirely too long and truthfully never fully discusses her feelings with Noah about becoming Amish or about the possibility of him becoming English. At the same time in Belonging, both Rose and Noah continually make self-centered and immature decisions that show how utterly not ready they are to be making such huge, life altering, and permanent decisions. Belonging was definitely the most frustrating of the three books for me, and we end Belonging finding out that Rose is pregnant. This led me to believe that Forever was going to be nothing short of me pulling my hair out in order to trudge through the frustrations that must inevitably come as a result of Rose being pregnant. However, I was overreacting.

While Rose and Noah both had moments of immaturity in Forever, truthfully both of them seemed to be miles ahead of where they were in Belonging. As Anna Reads would say, I’m pretty sure I’m having a case of old lady syndrome though because all my life I have been a proponent of letting people get married when they want to get married. My brother was barely 18 when he got married, and I saw myself getting married about the same age even though I actually ended up being 22 when I got married. However, I’ve increasingly become aware of how young and immature most people are at this age, and as I’ve already discussed the immaturity that bothered me with Rose and Noah, their discussion of marriage definitely left me concerned.

For the most part, Forever didn’t hold the same intensity of frustration as Belonging which was really a good thing. I’m not sure I could have trudged through it had that been the case. The addition of Sam and Sarah as narrators helped to break up some of the struggles that would have come from having the book solely focused on Rose and Noah. Sam’s relationship with Summer and Sarah’s newly developing relationship with Micah gave the book more depth and provided some relief for the frustrations I’ve already discussed.

Ironically enough, Rose and Noah do seem to find the compromise I thought was impossible in my review of Temptation. Some of the compromise and aspects involved in it I wonder how realistic they can be but without having more information about the Amish culture I’ll never be able to answer that. Forever does have a couple of twists and events that sparked deeper emotions within me. But I’m concerned about the hinting around to Justin’s potential involvement with an Amish girl as to whether that means more books for the series or whether this is the end. I’m not sure I know which I’m hoping for either.

Forever ended up being a sweet and less frustrating ending to the Temptation series than I was expecting. I’m satisfied with the way that it ended, but feel some unease yet curiosity about whether Justin will get his own books or not. Forever gets 3.5 Stars from me. Have you read Forever? What did you think? Let me know!

Posted by Somewhere Only We Know at 3:05 PM