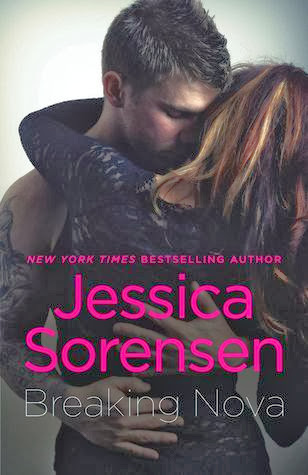 I have a lot to say about this one. When I started Breaking Nova, I was a little disappointed with how obvious some elements were. I was highlighting and making notes in my Kindle. "X-Character does X-thing." etc. I was noting my predictions within the first chapter. Granted, these predictions covered actions about to take place, not how the book would ultimately turn out. And on these predictions, I was right. So this was a slight disappointment for the beginning. I don't like being able to predict too much of the book.

The second thing I really noticed about Breaking Nova was how similar Jessica Sorensen's two main characters typically are--at least out of the books of hers that I've read. Let's take Callie and Kayden for example. Callie was sexually abused. Kayden was physically abused. Both find extremely unhealthy ways of coping. Ella and Micha both have a parent that chose to leave them. Ella's via suicide, Micha's via just leaving his family. Both find unhealthy ways of coping. And this is the same pattern for Nova and Quinton. Both have a very similar experiences that leaves them scarred and broken, and both find extremely unhealthy ways of coping. I want Jessica Sorensen to explore some main characters who aren't so similar to each other in experience and in coping mechanisms.

All of that being said, I can't say that I wasn't sucked into this story just like Jessica Sorensen has sucked me in to the other books that I've read by her. She just has this way of pulling me in. And things that normally would make me sigh in frustration, roll my eyes, or want to throw the book across the room, she somehow manages to tackle with inflicting minimal frustration upon me.

Probably my biggest frustration with this book was with Nova. She goes through quite a stretch of the book wondering why Landon made the decision that he did, yet she wont bring herself to explore the one guaranteed way of finding that out. This is really the only part that had me rolling my eyes and wanting to pull my hair out. It was so obvious. And then on Quinton's part he has this whole "I don't deserve anything good" thing that he keeps reverting back to. I just generally don't do well with pity parties...and while I won't say Quinton's attitude is a pity party exactly, he does put himself down in a way that I just can't stomach.

But as with Jessica Sorensen's other books, Breaking Nova also shows us how the destructive ways of coping her main characters choose never play out for their benefit and these characters always have to find a way to overcome their struggles and see their adversity through to the other side. I can't help but enjoy the lessons these characters learn and enjoy watching them grow. In this book, Nova makes a series of bad decisions, but in the end, she's able to see what changes she needs to make and she reaches out to her mother for help. I imagine book 2 in this series will be focusing on Quinton attacking his bad habits and overcoming his problems.

Jessica Sorensen does tackle a number of sensitive topics. This is typical of her writing--at least what I've read. She covers suicide, fatal car accidents, the death of a parent, a parent watching a child make a series of bad decisions but not being able to stop them from heading down that destructive path, drug abuse--even the progression of starter drugs to harder more addictive substances--alcohol abuse, and sexual situations. The list goes on. Tackling these issues and seeing how real Sorensen's characters are is what makes her books so good.

In the end, I had some frustrations but was won over by the messages behind the story. Breaking Nova ends in a place where you know hard times are ahead for these characters, but I need to know how it all ends. Breaking Nova gets 4 Stars from me. Fans of Jessica Sorensen's work will eat this one up. And I think fans of the new adult genre will enjoy it as well. Have you read Breaking Nova? What did you think? Let me know!