The Destiny of Violet & Luke - Review 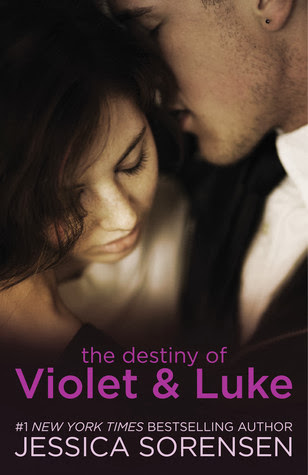 The Destiny of Violet & Luke (The Coincidence, # 3)

Goodreads description--Luke Price's life has always been about order, control, and acting tough on the outside. For Luke, meaningless relationships are a distraction-a way to tune out the twisted memories of his childhood. He desperately wishes he could forget his past, but it haunts him no matter what he does.

Violet Hayes has had a rough life. When she was young, she was left with no family and the memory of her parents' unsolved murders. She grew up in foster homes, living with irresponsible parents, drugs, and neglect, and trying to fight the painful memories of the night her parents were taken from her. But it's hard to forget when she never got closure-and she can't stop dreaming about what happened that tragic night. To make it through life, she keeps her distance from everyone and never allows herself to feel anything.

Then Violet meets Luke. The two clash instantly, yet they can't seem to stay away from each other. Although they fight it, they both start to open up and feel things they've never felt before. They discover just how similar they are. But they also discover something else: The past always catches up with you . .

First off, The Destiny of Violet & Luke is one of the least graphic books of the new adult genre that I’ve read. I always enjoy when these books aren’t constantly trying to push the line on this. Kudos Jessica Sorensen for that. Although, there is no shortage of f-bombs.

Violet is Callie’s roommate. Luke happens to be Kayden’s roommate and best friend. Unlike Luke and Kayden, Callie and Violet don’t really have the best relationship. They both pretty much keep to themselves. They have an unspoken common rule of...well...not speaking to each other. We’ve seen glimpses of Violet throughout this series from Callie’s perspective, and I love how perspective is just that. It’s a version of the truth, a portrayal, but not always truth itself. Callie sees what Violet wants Callie to see. And I loved this underlying concept of “things aren’t always as they appear.”

As the description says, Violet’s parents were murdered when she was young. Since then she’s been bounced from foster family to foster family. None of which seemed to know what to do with her and what she’s seen. Few who make an effort. Eventually ending up with Preston and Kelley who were her foster parents before turning eighteen and going to college. (Preston and Kelley are now divorced, but that doesn’t matter much.) Violet’s had to learn a myriad of hard lessons from her life. The main lesson being that letting people in will only hurt her in the long run. People aren’t generally nice for the sake of being nice. If they are nice, it’s because it benefits them. But Luke doesn’t fit into her mold. He DOES do nice things for her that do not seem to benefit himself.

Luke initially becomes fascinated with Violet because she reminds him of his sister who committed suicide. Though he normally cares about no one but himself, he finds himself drawn to the girl who jumped out of a window and into his life. His past that is eluded to in the description was troubled for sure, but I feel as though the reader’s imagination is probably worse than the reality of Luke’s situation. Though, one can never know for sure how troubling of a life it was that he led unless having lived something similar. I’m sure it was extremely scarring. Despite being borderline alcoholic, battling rage issues at times, and addicted to nicotine and easy women, Luke seems to be managing better than most new adult males. Well…at least he appears to be mostly sane.

I enjoyed the slow building of trust between Violet and Luke. This took more time than most, and I found myself appreciative because it felt true to the characters. Anything faster would have been out of character and forced. I also enjoyed where Jessica Sorensen decided to end this one. I was approaching the 70% mark, conflict didn’t feel immediate, but yet, I knew that conflict had to come from somewhere otherwise what would be the point. At the same time, I felt like to introduce conflict at this point would be to force a rapid resolution and ending. But Jessica Sorensen timed this just right in my opinion, which left me wanting more.

Unfortunately, The Destiny of Violet & Luke falls into the same pattern of many other new adult books, and even more specifically, the pattern of Jessica Sorensen’s books. I’ve now read 7 books by her at this point (The Secret of Ella & Micha, The Forever of Ella & Micha, The Temptation of Lila & Ethan, The Coincidence of Callie & Kayden, The Redemption of Callie & Kayden, The Destiny of Violet & Luke, and Breaking Nova), and all of these books follow the same predictable pattern. I find myself getting sucked into them, yet, I’m not blown away by them at the same time.