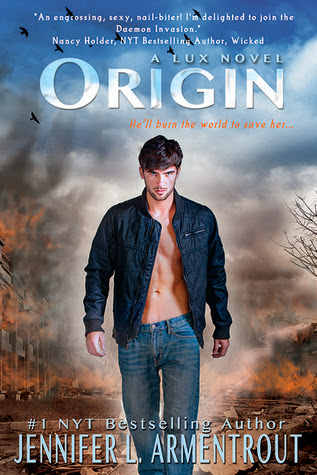 Goodreads description--Daemon will do anything to get Katy back.

After the successful but disastrous raid on Mount Weather, he’s facing the impossible. Katy is gone. Taken. Everything becomes about finding her. Taking out anyone who stands in his way? Done. Burning down the whole world to save her? Gladly. Exposing his alien race to the world? With pleasure.

All Katy can do is survive.

Surrounded by enemies, the only way she can come out of this is to adapt. After all, there are sides of Daedalus that don’t seem entirely crazy, but the group’s goals are frightening and the truths they speak even more disturbing. Who are the real bad guys? Daedalus? Mankind? Or the Luxen?

Together, they can face anything.

But the most dangerous foe has been there all along, and when the truths are exposed and the lies come crumbling down, which side will Daemon and Katy be standing on?

And will they even be together?

Opal (book 3) ends with a "cliffhanger." Daemon, Katy, and crew broke into the military facility that was holding Beth and broke her out. For this point, they were successful. However, Katy gets captured in the meantime. It didn't really feel like a cliffhanger to me in that I expected something like that to go down. The whole book was building up to something going wrong, and everything was working out too smoothly up until that point. And so that's where we pick up with Origin. Katy's been captured and separated from Daemon. This means that while I wanted to know how it all played out, I also knew there would be trudging through some down time with Katy and Daemon separated that I would have to get through before I could get to "the good stuff" in Origin. And that's essentially how it plays out. The beginning of Origin was pretty slow for me. I was 30% in before I started getting invested again.

Katy goes through a lot in the time that she's separated from Daemon at the hands of Daedalus, but honestly, not really as much as I expected with the way Dawson and Bethany talked. I expected Katy to be going out of her head during the process. Daemon makes some pretty rash decisions that actually pay off for him--as things tend to do for Daemon. I have a feeling that there might be some criticism over one decision that Katy and Daemon make, but I loved it. Although a couple of words and phrases strategically placed have me cringing for the future.

Katy's a fairly strong character though. She doesn't have these mental breakdowns that a lot of characters do. I mean obviously she has moments where she breaks down and cries, but she doesn't really have moments where you wonder if she's going to be able to get up and brush herself off again. She's a strong female lead.

Daemon is still Daemon. He's snarky and sarcastic. He's got such a smart, witty mouth. I love it. He's fiercely protective of Katy in just the way you want a manly man (or er...manly alien) to be, but not to the point where he's too much. I still love how he calls her Kitten. It can be endearing, provocative and sarcastic all at the same time. It's the perfect nickname from Daemon to Katy.

I enjoyed the addition of Archer into the cast of characters--though I haven't fully figured him out yet. We find out more about Luc, who I had completely forgotten existed between the time I read Opal and the time I read Origin. I like what may be developing between Archer and Dee. Dawson and Bethany are kind of equalizing and re-acclimating to life outside Daeladus. But their "twist" was visible from a mile away.

The ending leaves things a bit open. I wouldn't say that it had a cliffhanger ending--definitely not like Opal's ending was supposed to be--but there are questions that I feel a burning desire to have answered sooner rather than later.

Origin gets 4 Stars from me. Have you read Origin? What did you think? Let me know!