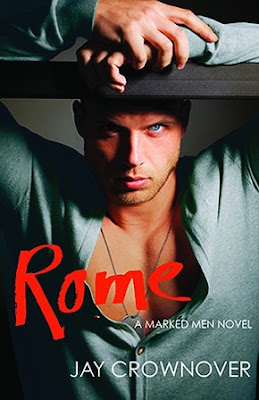 Goodreads description--Cora Lewis is a whole lot of fun, and she knows how to keep her tattooed bad boy friends in line. But all that flash and sass hide the fact that she’s never gotten over the way her first love broke her heart. Now she has a plan to make sure that never happens again: She’s only going to fall in love with someone perfect.

Rome Archer is as far from perfect as a man can be. He’s stubborn and rigid, he’s bossy and has come back from his final tour of duty fundamentally broken. Rome’s used to filling a role: big brother, doting son, super soldier; and now none of these fit anymore. Now he’s just a man trying to figure out what to do with the rest of his life while keeping the demons of war and loss at bay. He would have been glad to suffer it alone, until Cora comes sweeping into his life and becomes the only color on his bleak horizon.

Perfect isn’t in the cards for these two, but imperfect might just last forever . . .

I’ve really enjoyed the Marked Men series. Though neither myself nor my husband have any tattoos or body piercings, I do find myself attracted to guys with tattoos. And so that’s what initially drew me into this series. Rule was a bit descriptive for my tastes, but Jet was more toned down than that. I was worried going from Rule to Jet that the story lines would be too similar, but as you can see in my review of Jet that wasn’t the case. And Rome has a different storyline as well. Because the concept behind this series is that each guy in their group is getting his own book (I hope EACH guy is), I wasn’t really excited initially that Rome was next in line. I was hoping for Nash or Rowdy. Rome was present in Rule, but not an overly present character in either of the previous books so I wasn’t as invested in him at that point. Whereas Rule and Jet were both playboys before settling down, Rome has never really been a flippant kind of guy, even when it comes to relationships. And I’m so glad. I get so sick of seeing the playboy lead in new adult books.

Rome has his issues like each of the boys in this series. Of course, like Rule, Rome lost his brother Remy several years ago, and he still struggles with that. He’s recently finished his service in the military, but only because of his injuries and mental state and not by choice. So Rome has really been struggling with trying to get back into civilian life and find his place again—all very believable.

Cora has been hurt by her past which has caused her to clam up. She’s looking to settle down, but she wants perfect which we all know is unattainable. She lets her past hurts define her present and her future which I can totally relate to. However, I liked how Cora was straightforward and direct. She calls it like she sees it. And no one is immune to her advice and opinions. I can appreciate how direct she is.

Because Cora is so straightforward, there isn’t a huge dance between Rome and Cora about whether or not they’re interested in the other. I can also appreciate that. Sometimes people are too scared of rejection to put themselves out there—which I totally understand, but it gets old to read about every time. I also really appreciate the portrayal of the consequences of Rome and Cora’s actions. When you live your live one way, consequences of those actions are inevitable. Not all fiction avoids these consequences, but often times characters don’t suffer the consequences of their actions when the author doesn’t have to make them. However, timing must have been spot on for these two for things to end up like they did.

Jay Crownover does a great job of weaving the lessons each character needs to learn and experience into the overall story. She weaves each character helping the other grow as needed just beautifully. This is what I most enjoy about this series. While the main characters in each book don’t necessarily have the same backgrounds or the same struggles, they both answer a very specific need in the other.

Rome gets 4 stars from me. Fans of new adult and fans of this series will likely enjoy this newest installment. Have you read Rome? What did you think? Let me know!