The Distance Between Us - Review 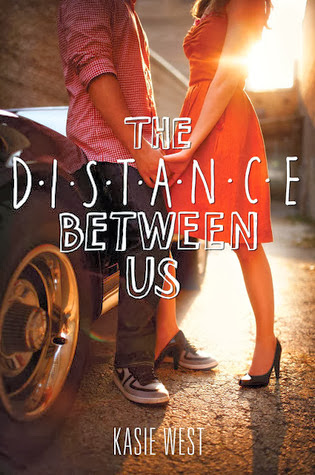 How about I loved Caymen! I saw a lot of myself in her--well minus the loving science part. She takes the sarcastic humor a little further than I tend to, but I loved it! She was so great--that's a round-the-bout way of saying I think I'm great! No self-esteem issues here. *cheese* (Seriously, I'm just kidding.) Caymen was a character I really loved reading about. She's observant, but this characteristic tends to lead her to assumptions. And we all know what happens when you assume things. Overall though, I really loved her.

Xander is so much more than he appears and so much more than Caymen assumes him to be--see there it is again. And he gets Caymen. He just does. Well there's a learning curve on the sarcasm for those who don't use it as frequently as Caymen does, but he picks up quickly. He learns that she uses it most of the time when she's in a good mood and that she also uses it as a defense mechanism and for deflection.

"...if I've learned anything about customers it's that they don't really want your opinion." - Ok so this one is personal for me. Having worked in customer service for 7 years, I can 100% say this is a true statement.

"The kitchen doesn't like two people in it at once so it constantly shoves counter edges and drawer handles into my hips and lower back."

"You like to look at dolls, don't you? You miss them when you're away." - This only makes sense in context, but believe me...it's funny.

"...the entire fronts of our bodies are touching. I take a sharp breath as heat pours down me. He backs me up against the counter. His palm pressing into my lower back feels like it could singe a handprint onto my skin. I'm staring as hard as I can at the collar of his T-shirt.
'Caymen?'
'Yes?'
'You look terrified. Does this scare you?'
'More than anything.'
'Why?'
'Because I didn't bring my mints.'
'And now the real answer...'"

"Sean raises one eyebrow when he sees us, probably thinking, Didn't we all agree that this boy is too pretty?"

The Distance Between Us was a really quick read for me--which is one of the things I'm looking for in a good book. I was completely engrossed. And while the subject isn't completely original, it didn't matter. There were enough deeper parts to keep this from being one that you blow through and forget days later.

I've been trying to read more standalones lately, but there are a couple of questions that I'd like answered that weren't completely wrapped up, so I wouldn't mind there being a sequel. If there was, I'd pick it up immediately. And The Distance Between Us just makes me excited about reading the other Kasie West book I have in my possession, Pivot Point.