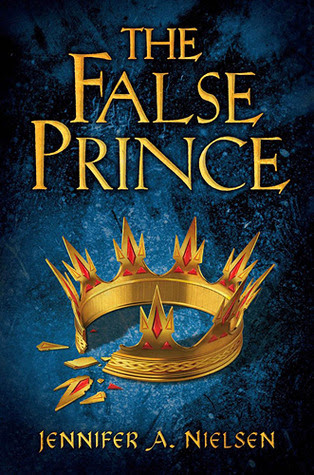 The False Prince (The Ascendance Trilogy, # 1)

By: Jennifer A Nielsen

Source: Borrowed from my local library, and then free audio download from Auidobook Sync

Goodreads description--THE FALSE PRINCE is the thrilling first book in a brand-new trilogy filled with danger and deceit and hidden identities that will have readers rushing breathlessly to the end.

In a discontent kingdom, civil war is brewing. To unify the divided people, Conner, a nobleman of the court, devises a cunning plan to find an impersonator of the king's long-lost son and install him as a puppet prince. Four orphans are recruited to compete for the role, including a defiant boy named Sage. Sage knows that Conner's motives are more than questionable, yet his life balances on a sword's point -- he must be chosen to play the prince or he will certainly be killed. But Sage's rivals have their own agendas as well.

As Sage moves from a rundown orphanage to Conner's sumptuous palace, layer upon layer of treachery and deceit unfold, until finally, a truth is revealed that, in the end, may very well prove more dangerous than all of the lies taken together.

An extraordinary adventure filled with danger and action, lies and deadly truths that will have readers clinging to the edge of their seats.

I almost feel like that description tells you more about The False Prince than I ever could. I started The False Prince because I was browsing my library's audiobook selection--which isn't all that diverse, but it's growing--and I remembered seeing that people liked The False Prince, though I haven't ever read any other reviews about it. So I decided I'd give it a shot. Funny enough, The False Prince ended up being the free Sync audio download the very next day so I downloaded it as well.

The description doesn't say, but the royal family has all been murdered. The country of Carthya is on the brink of war. The False Prince follows the four orphan boys being considered for the position of impostor for the long, lost prince, but mostly it focuses on one orphan in particular, Sage. Sage is quirky and chess-player smart. He comes off as not being as serious as the other boys at learning what he needs to learn in order to fill the role of missing prince. Sage never wanted to be in a position of becoming prince and taking over the kingdom. But if he doesn't take this seriously, the only other option is death. He's witnessed that first hand. And Sage...well he doesn't want to die.

Tobias and Roden are the other two orphans that really have a shot at filling the position. Tobias is a quick learner and determined to win, but he also is a little too eager to please Connor. Roden plays the game a little better than Tobias and develops an ally in order to help give himself an advantage. But neither boy possesses the same unruly character at his core like the lost prince. Sage is the only one who has that. And while Connor is constantly trying to bend Sage to his will, this characteristic is one of the top reasons why Sage is perfect for replacing the lost prince.

There are other secondary characters that play their roles perfectly. Connor, of course, is the mastermind behind this plot. Mott is more than a servant, but he's loyal to Connor and to doing what he thinks is best for the country. We are also introduced to Imogen who is currently working as a kitchen maid for Connor in an attempt to pay off a debt. Imogen and Mott both take risks for Sage throughout this twisted plot, but Imogen goes so far as to share her most sacred secret with Sage thus forging a bond between them. There's also the princess who was betrothed to Prince Darius who was murdered along with his mother and father. She will automatically be betrothed to whichever orphan can convince Conner and the country that he is the long, lost prince, Jaron.

The plot seemed simple enough from the beginning, yet truly interesting for me. There was one twist in particular that I admit I should have seen coming, but just really didn't until it was upon me. The entire book was one big chess game and I loved seeing everything revealed and brought together.

Charlie McWade did a really good job with the narration. All in all I'm happily giving The False Prince 4 Stars. Looking forward to book 2, The Runaway King. Have you read The False Prince? What did you think? Let me know!

*Note: I listened this book on audio. Any misspellings of character names or places result from not being able to see them in print and not being able to find them on the internet. If there are any that you see, please let me know in the comments, and I'll update this post.

Email ThisBlogThis!Share to TwitterShare to FacebookShare to Pinterest
Labels: 4Stars, Jennifer A Nielsen, The Ascendance Triology, The False Prince