As you guys know, I've been re-reading the Vampire Academy series. Check out my From the Ashes reviews of: Vampire Academy, Frostbite, Shadow Kiss, and Blood Promise. Spirit Bound gets an Upon Further Review post instead of From the Ashes because Spirit Bound was actually one of the first post I ever wrote. I can't even call that a review. I wasn't sure where I was going with the blog at that point, and I had NO idea how to go about writing a review that had any substance. Here's my attempt to make up for that. 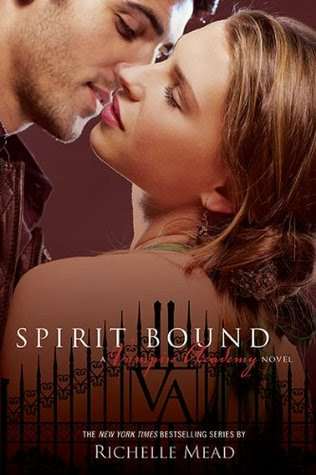 Published: May 18th 2010 by Penguin Razorbill

After a long and heartbreaking journey to Dimitri's birthplace in Siberia, Rose Hathaway has finally returned to St. Vladimir's-and to her best friend, Lissa. It is nearly graduation, and the girls can't wait for their real lives beyond the Academy's iron gates to begin. But Rose's heart still aches for Dimitri, and she knows he's out there, somewhere.

She failed to kill him when she had the chance. And now her worst fears are about to come true. Dimitri has tasted her blood, and now he is hunting her. And this time he won't rest until Rose joins him... forever.

I don’t normally do this, but due to the cliffhangers between each book I must state that there will be spoilers for Blood Promise (book 4) and or any previous Vampire Academy book in this review of Spirit Bound. It can’t be helped. If you haven’t read the four Vampire Academy books before Spirit Bound then PLEASE stop reading here!


Now….Let’s discuss briefly the ending to Blood Promise for just a minute. Rose traveled to Russia to find Dimitri and kill him, thus freeing him for a state of being that Dimitri-the-dhampir would never have wanted to be in, right? Right. Well at the end of Blood Promise, Rose has finally made her decision to kill Dimitri. It can’t be helped. It’s him or her. And she stakes him. Right before finding out that there’s a Spirit user out there in the world that claims to have brought a Strigoi back to his/her previous state of being (Moroi, human, dhampir). How heartbreaking must it be to have killed the person you’re in love with after you’ve tried so hard NOT to kill them, only to find out that there’s possibly a way to save them? BUT…guess what…Dimitri didn’t die! No sir! But now instead of Rose hunting him, he’s decided that he’s going to hunt her. And that’s essentially where we pick up with Spirit Bound.

I was always Team Dimitri in these books, though I like Adrian and am so excited about what’s happening with him in the Bloodlines series. This reading of Spirit Bound I was particularly aware of comments that Rose makes throughout the book to indicate where her heart truly lies. There might be a triangle between these characters, but Richelle Mead makes it clear that the way Rose feels for Dimirti is completely different from the way she feels for Adrian. Because I have a newfound and deeper love for Adrian as a character, I was struck rather brutally with how unfair to him Rose is in their relationship. She rarely sees Adrian as being able to overcome the persona that she’s pinned on him. While I can understand how she’s come to see him the way she does, it isn’t really fair to him or to herself. Or to Dimitri.

Some of the aspects that play a major role in Spirit Bound are so embarrassingly foreshadowed in the previous books that I’m truly, truly ashamed that I missed them in my first reading. There’s that f-word again. I’ve mentioned it in every review of this series, but Richelle Mead’s foreshadowing is some of the best I’ve seen. I can’t wait to see how everything ends with the Bloodlines series so I can go back and re-read it knowing the bigger picture and what foreshadowing details I’ve missed already.

As with the field experience laid out in Shadow Kiss, I love how the trials were set up to test the dhampirs in order for them to rank and then graduate. It seems such a small but brilliant addition to their curriculum and a right-of-passage. I love that Richelle Mead included this in Spirit Bound. And as one would expect, the trials in no way compared to what Rose has already gone through in her real world experience having been kidnapped by Strigoi and decapitating two of those, fighting in the battle at St. Vladamir’s that resulted in countless Strigoi deaths, and her international Strigoi hunt to try to kill Dimitri. Yeah…some Guardians pretending to be Strigoi just isn’t going to match up to that. And of course, Rose’s days of big adventures out in the real world aren’t even close to being over. They’re only just beginning.

I touched on this earlier but with each reading of this series, I’m impressed with how much Rose has to go through things like this. We pick up Spirit Bound with Rose receiving taunting letters from Dimitri which is a constant reminder that he’s no longer the man she fell in love with. She has to take her trials without her mentor there like the other students have. The lengths she goes through to try to save Dimitri and change the rest of the Moroi world is above and beyond someone who has fallen in love and had her heart broken. And she doesn’t even get the credit for all that she’s put in, all that she’s lost.

As I said before, with reading the Bloodlines series I’m more in tune with the things going on with Adrian, and I think more than the things that Rose suffered and went through in this book, Adrian totally beats her on that. He’s done nothing but try to be the supportive boyfriend, even when Rose’s mission becomes about trying to save her ex-boyfriend. Adrian continues to get pushed aside, misunderstood, underestimated, undervalued, and generally kind of walked over. I hate it for him, but I’ve said before that he needed these experiences to change him, to make him stronger, and to get him ready for the events he must face with Bloodlines. It’s all for the greater good.

Typical of the other Vampire Academy books, Richelle Mead peppers this book with the sarcastic, the witty, and the downright humorous. With characters such as Abe, Christian, Adrian and Rose, the comedic relief is all over the place. Rose banters with Stan, with Victor, of course the typical comments to Christian and with Adrian. But Adrian and Christian give it right back. Abe is such a flirt and he uses that to his advantage in Spirit Bound. I can see how easy it would be to fall for his charm. He is still one of my favorite characters in the series despite having such a small role in this book. I love with is being done with his character and how he and Rose are developing their relationship—as strange as it is. (Would it be too much to ask for an adult series revolving around Abe? With Rose's mom too maybe?) Shoot even Lissa had me cracking a smile a time or two, specifically when defending Christian’s good looks to Rose. Mia, Robert. Seems like almost everyone is gifted a line or two. Drunken sod anyone?

Speaking of secondary characters, we see Jill, who’s babbling self seems so different from how she’s grown and matured in the Bloodlines series. There’s Eddie who I’ve said multiple times now that I would love to have his own series. He’s so loyal, he follows Rose into her big master plan without a single question as to why. He literally trusts her that much. Though Eddie doesn’t take Rose’s mission lightly once he finds out what it is. He isn’t afraid to stand up to her and give her a dose of hard to swallow reality that she desperately needs. Everyone needs friends like Eddie in their lives.

I really enjoyed Lissa and Christian’s interactions in Spirit Bound. Because of the bond, Richelle Mead gets the dual narration from Rose seeing into Lissa’s head. So while we left Blood Promise with Lissa and Christian breaking up, it was obvious that both of them still care for each other in Spirit Bound. The way that they find their way back to each other through the means of working on a neutral task was really enjoyable. I liked seeing Christian show his protectiveness over Lissa. Not in a possessive kind of way. No, Lissa has the possessiveness covered. But Christian just genuinely cares for Lissa to the point where he always wants to have her back and look out for her best interests despite how much she’s hurt him in the past. I loved it. Christian knows Lissa better than she knows herself. His observant nature has always been a big draw for me.

Lissa is back to her stronger self now that she and Rose are united. They go into battle metaphorically speaking, and Lissa holds her own. As a matter of fact, so much of this story and plot of Spirit Bound is essential to Lissa. She has a big role to play and she’s eager to fulfill her role, to do her part, to make a difference, not just for her best friend and former guardian, but for the entire Moroi world. Lissa is ready to step into the political role her parents’ death has left in their world, but she has some resistance of course preventing her from doing so. But it doesn’t prevent her from doing whatever she needs to do.

I could spend days comparing Rose and Adrian’s relationship to Dimitri’s or Sydney’s, but time wouldn’t be on my side, you’d get tired of hearing me ramble, and spoilers would ensue. I literally took six and a half pages of notes while going through Spirit Bound this time, and as per usual what I most want to discuss is spoilerish in nature—the best parts always are. Spirit Bound was full of twist and turns my first time reading it. I should have seen certain events coming that I just didn’t. And the ones that were more obvious, I just wasn’t sure how they would play out, if all would be a success, or everything would blow up in the characters’ faces. But so much happens and cliffhangers are left. And well…Spirit Bound still lives up to the 5 Stars I originally rated it on Goodreads for me. Have you read Spirit Bound? What did you think? Let me know!

Since I mentioned Bloodlines so much in this review, check out my reviews of Bloodlines, The Golden Lily, The Indigo Spell, and The Fiery Heart.