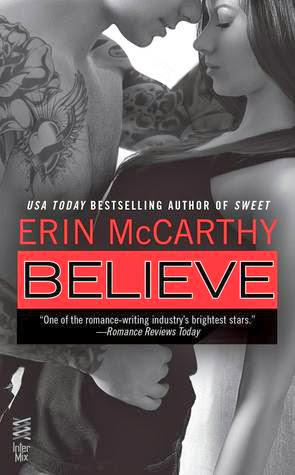 Goodreads description--Robin used to be a party girl… until she got black out drunk and woke up in bed with her best friend's boyfriend. Now she's faced with being THAT girl, and couldn't be more disgusted with herself. She can't even tell her friends the reason for her sudden sobriety and she avoids everyone until she meets Phoenix—quiet, tattooed, and different in every way that's good and oh, so bad…

Phoenix is two days out of jail when he meets Robin at his cousin's house, and he knows that he has no business talking to her, but he's drawn to her quiet demeanor, sweet smile, and artistic talent. She doesn't care that he's done time, or that he only has five bucks to his name, and she supports his goal to be a tattoo artist.

But Phoenix knows Robin has a secret, and that it's a naïve dream to believe that his record won't catch up with them at some point. Though neither is prepared for the explosive result when the past collides with the present…

After finishing Sweet, I had to jump right into Believe, and I was so glad that I had it already available to pick up next. Erin McCarthy has sucked me into these characters. She started planting little bits and pieces of Robin’s story into Sweet, and it was easy to see that Robin was going to be next to get her story told. However, I hate cheating books. I hate cheating period. The very idea of it makes me sick to my stomach. So to see that Robin’s story involved this topic I was a little wary of it. But Erin McCarthy didn’t glorify it. She didn’t excuse it. And neither did Robin.

As a matter of fact, Robin is pretty much disgusted with herself after waking up from blacking out one night from partying. Robin is so shaken by what she’s done to her friend that she goes into a bit of a depression. She pretty much hates herself. She doesn’t understand how she could do something so far from what her sober self would have done. And because of this, Robin makes a conscious decision to quit drinking. She wants to be sober and know that she’s in control of herself. While again, I doing enjoy reading cheating stories, it was nice to see a character feel so guilty about her own behavior and the step she takes to make sure it never happens again.

Phoenix is Tyler and Riley’s cousin. We’ve met their aunt before so we had an established tie there. But we find out that Phoenix is fresh out of a stint in jail. Obviously we don’t know why he was in jail for a while. But Phoenix and Robin connect over a shared love of art and simply wanting to be around someone who has no expectations of them. I loved seeing how their relationship grew. Robin makes a conscious effort (along with not drinking) not to play any games with Phoenix. She decides to be honest with him whenever she can and whenever she can’t, she stays silent. Neither push the other to discuss things they would rather not because they both understand what it’s like to not want to talk about a particular topic.

Like Riley from Sweet, Phoenix doesn’t fit into the typical new adult leading male pattern and I loved that. It’s so refreshing to get not one, but two guys who aren’t trying to sleep their way through town. And even though Robin is a bit of a party girl and she made a huge drunken mistake, she’s not fast and easy either.

I found myself highlighting up a storm whenever I was reading this book. Some of my favorites quotes:

Of course, I was never going to find that guy at a keg party. Another reason I had stopped going to the frat house all-nighters. I didn't have the stomach for the so-called living-in-the-moment fun since I had woken up next to Nathan.

I wanted to say that she wasn't good enough for him anyway, that she was a liar and a cheat and a [crappy] girlfriend who didn't deserve him, but did I really know that? And if I was no better than her, did I have any right to say anything?

At eight, I just knew there was something wrong with both of us because I was supposed to have the drugs but she was the one who couldn't go a day without them.

I just wanted someone to look at me, in all my pale, non-drinking glory, and think I was someone they wanted to talk to. That's all.

For some reason, that touched me. The guy that old ladies shied away from at the drugstore was worried about inconveniencing me. Me. I hadn't felt worthy of consideration lately.

"'The bluebird carries the sky on his back.' That's Henry David Thoreau."..."'No one is free, even the birds are chained to the sky,'" Phoenix said. "That's Bob Dylan."

"'There is no remedy for love, but to love more.' That's Thoreau," I mummered. Phoenix kissed the corners of my mouth. "'The future for me is already a thing of the past. You were my first love and you will be my last.' That's Bob Dylan."

I will say that I was disappointed with the ultimate conflict of the book. I had been so proud of Robin and Phoenix up until this point that the decisions and reactions they made to the major conflict (or more accurately, that CAUSED the major conflict) was a letdown. It felt out of character, and it felt almost like Erin McCarthy took the easy way out there. I did enjoy the character growth and the effort that both Phoenix and Robin put into making themselves better people and into their relationship as a whole.

Overall, I was hooked on this story and these characters. Despite the topic cheating having a prominent place in the storyline, I found myself enjoying most every aspect of this book. Believe was also less graphic than most new adult books that I’ve read—as I’ve found to be the case with Erin McCarthy’s other books in this series—and I always appreciate that. I’m giving Believe 4 Stars. Have you read Believe? What did you think? Let me know!