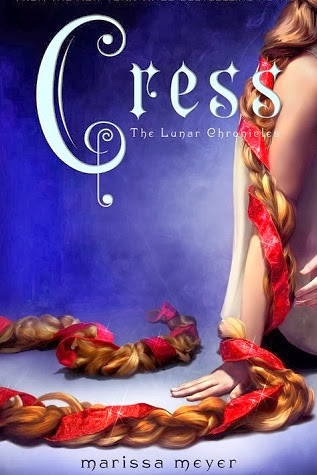 I feel like I’m going to stumble through this review rambling, fan-girling, and generally not making sense. I hope not, but let’s dive right in.

Marissa Meyer has made the Lunar Chronicles series so much fun to read. I never know how she’s going to work the fairytale aspects into her retelling. She always hits the major plot points from the fairytales in such a way that is fun and exciting to experience. Her world building around these fairytales is so spot on and unique that it continues to surprise me. As far-fetched as Cinderella being a cyborg sounded when I initially stumbled upon this series, Marissa Meyer has made every single decision works perfectly, and I love it. I love the anticipation of knowing a certain part of the fairytale has to be addressed and just waiting to see how Marissa Meyer is going to handle each piece of the puzzle.

I, also, love the steady build of this series so far. We started Cinder with the main storyline of Cinder and Kai—an impossible relationship—Earth fighting the letumosis disease, and the Lunar queen being a threat to Earth, but we’ve expanded so much since then, encompassing other characters and subplots. Obviously with book 2, we bring in Scarlet (aka Little Red Riding Hood) and Wolf, and Thorne. Turns out that we actually met Cress in Cinder, but we just didn’t know it at the time, and I loved that little fact.

Yet again, Marissa Meyer brings a unique take on the classic story of Rapunzel. As the description says, instead of being locked away in a tower, Cress has been imprisoned in a satellite for seven years doing the Queen’s bidding through the go-between of Sybil the queen’s thaumaturge. Cress has gotten extremely good at hacking during her time locked away in her satellite. She’s been exposed to all of the drama between Earth and Luna and she’s made a decision about which side she’s going to end up on.

Cress has also developed a bit of a crush on Thorne, researching his history and creating her own ideas to explain away his repetitive bouts of trouble with the law. I loved how she basically has a celebrity crush on Thorne. I was worried that her little heart would be broken—Throne is too—when she finds out that he’s not exactly what she’s imagined him to be. However, unlike most celebrity crushes, Cress actually gets to spend time with Thorne, and due to an injury he suffers, Thorne has to depend upon her much more than he would like. Marissa Meyer brought this development out in a slow process that was easy to accept and adapt to—easy to get on board with and root for at the same time.

I liked seeing the progress that Scarlet and Wolf were making. It’s obvious how much Wolf cares about Scarlet and after his loyalties were called into question in Scarlet, I’m glad to see he’s firmed up his place. Scarlet finds herself in the best place to provide set up for the introduction of our next main lead from the next fairytale (Snow White aka Winter) for the next book. And I’m glad that Cinder and Kai have made the progress that they’ve made as well. Kai is allowed time to process the information he’s received and the events that have taken place since Cinder and he’s able to form some theories about why Cinder has made the decisions that she has that do not involve treason and betrayal.

One thing I will say, I’ve come to realize that I’m not always a fan of series where the good guys are battling the same bad guy over the entire series, unless there are new/different mini-bad guys for each book. Let’s take Harry Potter for example. Yes, the main villain is Voldemort over the entire series, but Harry has some challenge or mini-bad guy to battle each book. Or the House of Night series how Neferet is the villain for most (if not all since I abandoned that series) of the series and the characters don’t seem to make any progress toward taking her down. That being said, I was starting to get a little bored with the Queen Levana villain aspect of the storyline, but they made enough progress in Cress for me to be okay with where things ended. And considering Winter is supposed to be the last book in this series, having Queen Levana be the main villain for one more book won't be so bad. If the series were any longer, I would desire some diversification.

All in all, I’m happy to give Cress 4.5 Stars. Each book in this series has gotten better and better for me. I hope that continues with Winter and that won’t end up being a disappointing series ender. Have you read Cress? What did you think? Let me know!

Posted by Somewhere Only We Know at 7:05 AM