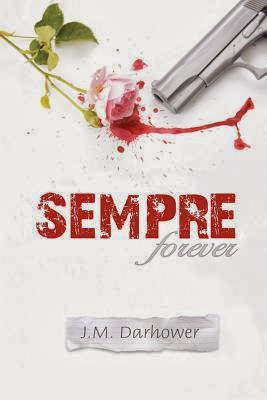 Goodreads description--Haven Antonelli and Carmine DeMarco had vastly different childhoods. Haven, a second-generation slave, grew up isolated in the middle of the desert, her days full of hard work and terrifying abuse. Carmine, born into a wealthy Mafia family, lived a life of privilege, never having to answer for anything he did.

Both now seventeen, a twist of fate causes their worlds to collide, making them question everything they ever believed. Entangled in a web of secrets and lies, they learn that while different on the surface, they have more in common than anyone would think.

I can’t say that I’ve ever read a mafia book before. Nor have I read a book about human trafficking or slave trade. So when I read the description of Sempre, I thought this sounded like a different read that might be just the change of pace that I was looking for. It didn’t take long for me to realize that Sempre was indeed going to be a book that I would like very much. JM Darhower has a great voice and his easy writing style pulled me in early on. Though there's nothing inaccurate about the description, I did have a slightly different picture in my head of how Sempre was going to go down than what actually happened.

Haven is, as the description states, a second generations slave. Her mother was a slave also who happened to have been raped by Haven’s father. As the description also says, Haven has experienced abuse to the point that she is jittery, jumpy, and flinching just about constantly. Haven’s mother presses her to escape and because of this stunt, Haven is sold to another "Master".

Vincent DeMarco is the mafia member who buys Haven after her escape attempt. Vincent has very specific reasons for purchasing Haven, though none of that is clear to Haven or really any of the other characters. He brings Haven into his family. She’s separate but a part at the same time. He treats her well with the exception of an occasional slip into “monster” mode. Vincent is a broken man. He’s lost his wife to the mafia, and he’s doing everything he can not to lose his sons to them also. Dominic and Carmine are very different. The mafia, it seems, has easily accepted that Dominic will probably not be a member of their family. But that’s not really the case for Carmine. Though Carmine still has the freewill to say “no,” the head of the Italian mafia pretty much assumes that Carmine will be following in his father’s footsteps.

Speaking of Carmine, he’s a hot tempered boy who frequently jumps into violent mode quickly. Of course he’s your typical leading male—meaning he’s fast and loose with his women. Carmine has a potty mouth to rival all other characters. But he’s scarred as well. Having essentially watched his mother die when he was eight and being shot in the process, Carmine has some baggage to say the least. After seeing that he and Haven aren’t quite as different as initial appearances would seem, he softens as he falls in love with her. I personally swooned every time he spoke Italian to her. Granted I had no clue what it was that he was saying. Sometimes JM Darhower would translate for Haven and thus for the reader, but sometimes not. I wanted to be annoyed that I had no clue what he was saying, but Haven didn’t know either. And it was endearing. Oh okay…it was straight out hot.

While things didn’t exactly progress how I pictured from reading the description, the essentials are there. Mafia slave and mafia prince are going to have a tough road to be together. And all isn’t cotton candy and unicorns. The pacing was good. I never felt like putting Sempre down exactly, and I never really felt like things were moving too slowly, but this is a hefty book coming in at 530 pages. Toward the end, I still didn’t feel like things were slow necessarily, but I was kind of getting to the point where I was ready for them to wrap up. While I don’t know that I could have predicted everything from the very beginning, while the story was unfolding pieces that felt like they were supposed to be game changers didn’t really feel like game changers. Maybe the information was leaked slowly enough to where I felt like I already knew what they were saying before they official made the important statements or plot twists. I say all of that to say that this one was a little predictable.

I’m not quite sure why, but I wasn’t expecting much from Sempre when I first picked it up. Maybe it was because I’m new to the mafia and modern day slave trafficking tales or maybe it was because I was unfamiliar with the author. It doesn’t really matter why I wasn’t expecting much at this point. What does matter is that Sempre exceeded my expectations in every way. I was sucked in. I enjoyed the ride. And I can’t wait to see what happens next. Sempre gets 4 Stars from me, and I hope it gets the love and attention that I think it deserves. Have you read Sempre? What did you think? Let me know!