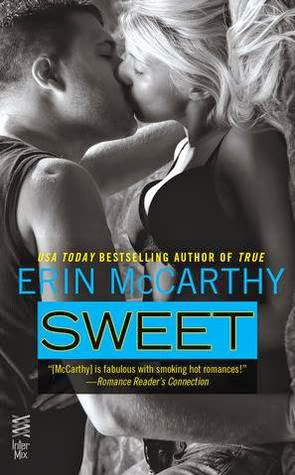 Goodreads description--Jessica Sweet thought going away to college would finally make her free of her parents’ constant judgments and insistence she play chastity club role model for their church events, but if anything, the freedom has made her realize she can’t go home and be a hypocrite anymore. Tired of dodging their questions, she stays at school over the summer and lands in an unexpected crash pad: Riley Mann’s house.

Sarcastic, cocky, and full of opinions, Riley is also sexy personified with tattoos and biceps earned from working as a roofer all day. Not the right guy for her even if Jessica was looking for a relationship, which she is definitely not. But Jessica knows that Riley hides the burden of having to raise his younger brothers behind that grin and as she helps him get his house in order for a custody hearing, they begin to fall hard for each other, and she is forced to question what she’s hiding herself.

I was pleasantly surprised whenever I read True. Erin McCarthy’s first installment was much deeper than I expected. I enjoyed the characters and their stories. And so I was excited to read the other books in the series. I got denied for Sweet whenever I requested it for review, but that didn’t stop me from finding another way to pick it up and find out what happens next. I have to say based off of True only, I wasn’t sure I was going to like Jessica and Riley’s story. Riley seemed a little on the mean side and Jessica was known to be a party girl bordering on slut. However, as with True, Sweet surprised me with its depth.

One of the first things I want to discuss is how Riley doesn’t fall into the cookie cutter, cliché new-adult male character, and I cannot fully tell you the happiness that brings me. The leading male of most new adult novels sleeps with a different girl every night, and Riley isn’t like that—AT ALL! Not only does he not understand sex with someone who he doesn’t care about, he also puts off having sex with Jessica despite how often she might throw herself at him. He’s taking his time and trying his best not to skip any steps which I cannot rave about enough. Kudos Riley, and kudos Erin McCarthy. Thank you, thank you, thank you for giving us a different leading male. Because of this, Sweet isn’t as graphic as many new adult books, but that was also a win for me.

Jessica fills some of the slack there though. Just because Riley isn’t ready to skip steps doesn’t mean that Jessica isn’t. She’s used to skipping steps, and so even with Riley she reverts back to what she knows. She brings baggage from her past sexual experiences into their relationship wondering if Riley is rejecting her because he doesn’t want her at all. Had she not been as “experienced”, these questions wouldn’t have been an issue.

In True, we met Tyler and Riley’s younger brothers, Easton and Jayden, and we saw how fiercely protective of them both Tyler is, but Sweet shows an even deeper side of that because Riley is the one actually fighting for custody of them. Tyler messed that up when he took the fall for his mother’s drug charges. A convicted felon probably isn’t going to be awarded custody of an eleven year old. I love this family dynamic. Despite Riley, Tyler, and Jayden's father having left, Easton having a completely different father, and their mother having a drug problem, these boys stick together, they love each other above all else, and they fight to stay together—doing whatever it takes and sacrificing whatever is needed to reach the desired end result.

Jessica comes into the picture needing a place to stay during the summer. She wants to do something to not only thank Riley and Tyler for giving her a place to crash for a week, she also wants to leave her mark on the house and on their family. Rory (Tyler’s girlfriend) cooks and has been accepted by all of the boys as an honorary family member, Jessica wants the same. So she starts a home improvement project. It starts out as a way to thank Tyler and Riley and grows into trying to help Riley improve the living environment in an effort to better his custody chances. Of course, working together and living so closely is how Jessica and Riley’s relationship begins to develop.

Jessica has her own family drama to contend with. Her father is a preacher and her parents force church, religion, her major—pretty much any aspect of her life that they can control—on her. Otherwise they’ll cut her off financially. Of course, these parents were crazy and hypocritical Christian characters—the only kind that appear to be in mainstream literature these days. That was a bit cliché and annoying to me, but luckily they didn’t have a huge part in the book. Jessica does eventually stand up to them. But I never understood why being cut off financially was that big of a problem—plenty of people don’t have their parents' financial support and they survive college all on their own. Of course it isn’t easy, but it’s totally doable.

Overall, I was hooked into Sweet easily, quickly, and I read it until I knocked it out. It was such an enjoyable read. Even though it had moments that weren’t completely original, the biggest parts felt original to me. And that’s a win. I was emotionally invested which is one of the biggest compliments I can give a book. Sweet gets 4 Stars from me. Have you read Sweet? What did you think? Let me know.

I had put on the tight red tank absently, then had wondered if more cleavage would be better for what I had in mind, then had been disgusted with myself for even thinking such a thought. So then I had decided no cleavage was necessary to my self-respect and pulled a Union Jack shirt on over the tank.

I wasn't completely useless. Just a product of my environment.

Want to go to the hardware store with me?
Is that a new club?

"Never ask someone to tell you who you are. You tell them."

"I'm too heavy," I said, because that's what we say as girls. We love the thought that a guy can carry us, but then we worry that he'll start thinking with each step that you were way heavier than he expected and that maybe you should lay off the ice cream. It's also maybe a slightly passive-aggressive way of seeking the reassurance we need. Toxic, sure, but it slipped out before I could stop myself.

"It's not a pretty place on the ground. Life gets a little ugly in the details, but up here, taken as a whole, you realize the world can be pretty awesome."