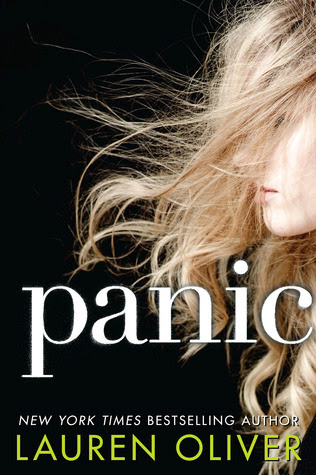 I fell in love with Lauren Oliver's writing when I read listened to Delirium. Her writing style was so poetic and frantic almost. I loved it. But truthfully I felt like that was missing from Panic. I don't remember any passages that I ended up highlighting in my kindle because of how beautifully they were written. And the pacing felt very slow for me. I finished Panic as fast as I did because I had the opportunity to continue reading, not because I was driven by frantic writing and a compulsive need to know what happens.

Most of the time whenever a book has dual narrators and one is male and the other is female, I assume that the two will end up together in a romantic relationship. I both love and get annoyed when this isn't the case. For Panic, I believe Lauren Oliver chose these two narrators because of the unique stories they each have to tell as a participant in the game, and while their stories are intertwined, they're not exactly about each other.

Panic, the game, is as the description says. It's a game that's been around in Carp that no one really knows how it started. Every year from the first day of the school year until the end, students contribute $1 per day to the pot that the winner gets to claim at the end of the game. The first challenge is to jump off this cliff into a lake. That's tradition. And every challenge after that is created by two judges whose identities are a secret and who are picked each year. The challenges are chosen to incite fear and well...panic. And the contestant who does the best in these challenges eventually wins.

There are all different kinds of reasons to play the game. The most obvious is the money. This year's pot is up to $67,000. But money isn't the only reason to play and Heather and Dodge both have varying reasons to participate.

I liked the concept of this book and the game itself. It reminds me of Countdown by Michelle Rowen, except these contestants choose to play the game. However, Panic can be just as dangerous as Countdown. Contestants have died, been paralyzed, etc in the past. This is not a game for the faint of heart.

One of the issues I had with Panic was that I really had a hard time liking any of these characters. Dodge has some anger issues that blind him and make him hard for me to connect with. He's had a crush on another character for quite a while, but it feels like the crush has no more substance other than thinking that she is pretty. He reminded me a lot of Carter from Carter Finally Gets It--true to a typical teenage boy, yet immature for my typical reading preference. Heather has had a rough childhood. She's been hurt so frequently that she puts up walls to protect herself. But because she rarely allows herself to be vulnerable, it wasn't the easiest to connect with her either. I understood her, but that didn't make me like her anymore--though I didn't hate her. I genuinely liked Bishop probably the best of all the characters, but I felt like he needed more of a backbone. And Natalie...well I didn't connect with her at all. She's one of those characters that I don't think I'll ever be able to connect with. Pretty and used to getting her way, she uses that to work advantages in all aspects of her life. I often found myself wondering why she and Heather were such good friends.

Panic gets 3 Stars for me. Have you read Panic? What did you think? Let me know!

Email ThisBlogThis!Share to TwitterShare to FacebookShare to Pinterest
Labels: 3 Stars, LaurenOliver, Panic, YA