Carter Finally Gets It - Review 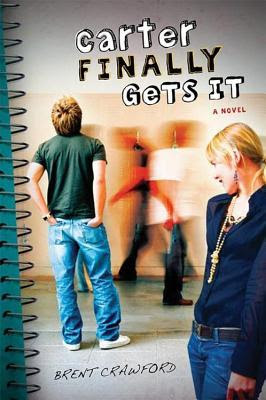 OM! I got this as a free audio download this past summer when Sync was doing their two free audiobooks per week. I never really expect TOO much out of those. I mean they had some good titles, but they’re free. And some of them, like this one, I’d never heard of before. Just looking at the description, I wasn’t expecting too terribly much from this one. However, my friend Paula listened to it a couple of months ago and said it was hilarious and that I needed to listen to it ASAP! When the opportunity came up for me to listen to the audiobook when I had time I just went for it! And you guys, she was SO RIGHT! This book is H-I-L-A-R-I-O-U-S!!!!!

Brent Crawford writes an awesome coming of age story about our young Will Carter. He’s going into high school this year and well…things are going to be different for Carter this year—better. Or so he hopes. Carter has no idea what he’s about to get himself into. And let me just tell you, Carter is all boy! Completely and undeniably…young, naïve, inexperienced, eager, and clueless…boy.

The title suggests that Carter might finally get what’s coming to him. Or things might finally click into place for our young padewan. I won’t tell you which one. But I can tell you that either one would probably be a satisfying ending—although I like the actual way this one ended.

For my friends and fellow book readers who are scared of audiobooks or who have struggled with narrators in the past I say “Have no fear! This is the audiobook for you!” Nick Podehl does the best job narrating a book I have ever listened to--EVER! And this beats Lorelai King who narrates the Stephanie Plum audiobooks that I love. Nick Podehl seriously commits to this book like no other narrator I’ve ever heard. He’s all in. And he is quite possibly what makes this book so great. Brent Crawford couldn’t have asked for a better person to narrate this book. While it’s obvious that the writing is off the charts funny by itself, Nick Podehl just brings this book to life.

I do feel like I need to offer the warning to our more sensitive readers that, again, young Carter is all BOY. This means he’s mostly got one thing on the brain. And so the subject content and language might not fit to all preferences. If that doesn’t bother you, then Carter Finally Gets It needs to be on your must read listen list.

Carter Finally Gets It wouldn’t normally even be a book on my radar, but I think this audio version of it deserves 5 stars if based off the narration alone. The story more of a 3.5 Stars. I’ll give it 4 Stars as an average of the two. Have you read/listened to Carter Finally Gets It? If so, what did you think? Let me know!