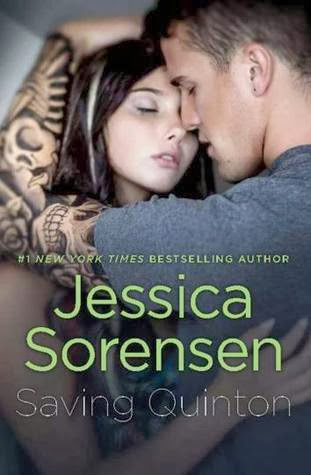 Goodreads description--Nova Reed can't forget him-Quinton Carter, the boy with the honey-brown eyes who made her realize she deserved more than an empty life. His pain was so similar to her own. But Nova has been coming to terms with her past and healing, while Quinton is out there somewhere, sinking deeper. She's determined to find him and help him . . . before it's too late.

Nova has haunted his dreams for nearly a year-but Quinton never thought a sweet, kind person like her would care enough about a person like him. To Quinton, a dark, dangerous life is exactly what he deserves. And Nova has no place in it. But Nova has followed him to Las Vegas, and now he must do whatever it takes to keep her away, to maintain his self-imposed punishment for the unforgivable things he's done. But there's one flaw in his plan: Nova isn't going anywhere . . .

And I thought Breaking Nova was intense… Man. My thoughts are kind of all over the place as I literally JUST finished reading this book minutes ago. I feel like books about drug addiction are in some ways similar to cancer books. It’s kind of like, even if you’ve never dealt with cancer or drug addiction personally, you probably know someone who has. I don’t typically read too many books that deal with this level of addiction, but Jessica Sorensen’s novels usually touch on all sorts of dark topics and so it’s no surprise that drug addiction is one she would take on in this depth and detail.

Typically guilt, self-loathing, self-sabotage, and all of this type of negative thinking is a turn off for me in books. I get so tired of characters blaming themselves for all the terrible things that happen in the world—things that are beyond their control. But for some reason I didn’t struggle with this with Quinton as much as I expected to. Maybe it was because, like Nova, I just kept telling myself that it was the drugs talking. Like if he could somehow get sober he would be able to move past his guilt, self-loathing, self-sabotage, etc. I expected Saving Quinton to be much more about Quinton coming out of his drug use and back into a healthy way of life, but truthfully the entire book was just about him delving further and further into the dark and dangerous place, moving from harder drug to harder drug. It was quite exhausting and overwhelming to even read about.

Nova has a great heart. She’s got baggage from her previous boyfriend, Landon, committing suicide. She couldn’t save him, and now no matter how desperately she tries, she can’t save Quinton either. But she can’t give up on him at the same time. I’ve not ever tried to help someone out of the pit of drug addiction, but I have tried to help someone who doesn’t want it, and I have had that battle in my head of not wanting to give up on someone despite how repeatedly they try to drag me down with them. I felt for Nova, and I know that so many people out there can relate to her who have family members or friends that are deep in the clutches of addiction. It breaks my heart.

"It can be so comforting, peaceful, serene. It can make you feel so in control, but it's just a mask--what we're trying to hide--is still growing, feeding off the addiction--"

"...you could spend a hundred years with a person and still not know them if they don't want you to know them."

"I think as long as he's alive still, there will always be hope."

Saving Quinton was an intense book. It kept me reading and moving forward. I had frantic dreams about this book at least two nights in a row. I have to give Saving Quinton 4.5 Stars. Even if the subject isn’t one I want to read on a regular basis, that doesn’t affect the fact that this book brought out some pretty extreme feelings for me. I even got nauseated at a couple of points. Have you read Saving Quinton? What did you think? Let me know!