From the Ashes: City of Ashes 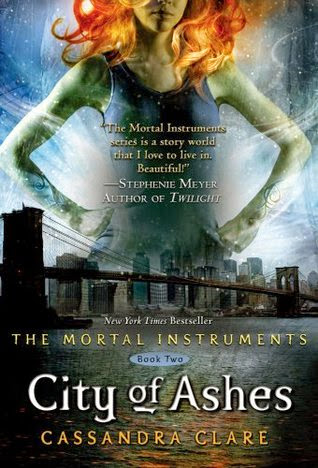 City of Ashes (The Mortal Instruments, # 2)

Goodreads description--Clary Fray just wishes that her life would go back to normal. But what's normal when you're a demon-slaying Shadowhunter, your mother is in a magically induced coma, and you can suddenly see Downworlders like werewolves, vampires, and faeries? If Clary left the world of the Shadowhunters behind, it would mean more time with her best friend, Simon, who's becoming more than a friend. But the Shadowhunting world isn't ready to let her go — especially her handsome, infuriating, newfound brother, Jace. And Clary's only chance to help her mother is to track down rogue Shadowhunter Valentine, who is probably insane, certainly evil — and also her father.

To complicate matters, someone in New York City is murdering Downworlder children. Is Valentine behind the killings — and if he is, what is he trying to do? When the second of the Mortal Instruments, the Soul-Sword, is stolen, the terrifying Inquisitor arrives to investigate and zooms right in on Jace. How can Clary stop Valentine if Jace is willing to betray everything he believes in to help their father?

In this breathtaking sequel to City of Bones, Cassandra Clare lures her readers back into the dark grip of New York City's Downworld, where love is never safe and power becomes the deadliest temptation.

Despite The Mortal Instruments being a favorite series of mine, I have only read each book once—until now. I’m actually surprised that this series hasn’t gotten a re-read from me sooner, but until starting my From the Ashes and Upon Further Review features, I felt guilty for re-reading because re-reads didn’t benefit my blog any. Well now they do, and I think it is way past time for me to re-read this entire series. Here’s my review of City of Bones in case you’re interested in checking that out.

One thing that hit me while reading City of Ashes was truly how much of the details of this story I’d forgotten. While I remember the most major plot-points, I’d forgotten almost ALL of the little details. Usually with my favorite series, I know them backwards and forwards. But since I haven’t re-read this series until now and my original read through was somewhere close to 5ish years ago, I just don’t have this series ingrained as much as I’d like. I guess I actually forgot some big things too because I totally forgot that we meet Maia and Jordan in City of Ashes. I also forgot that Valentine had white hair. I mean I knew Sebastian had white hair, but I totally forgot about Valentine having white hair too. And while Jace’s sarcasm and wit is one of the things that stood out to me upon first reading, this time through, I was reminded how funny Simon actually is too.

One of the best things about City of Ashes my first read-through was wondering whether Jace and Clary would turn out to truly be brother and sister or not. I won’t spoil it for anyone who hasn’t finished the series though. I remember being slightly sick to my stomach while reading City of Ashes for the first time because IF, just IF, they really did turn out to be brother and sister then that would be kind of gross. I was praying that they weren’t, because I didn’t think I’d want to read the series if they actually turned out to be brother and sister. And this was made even more awkward and uncomfortable the first read-through with how adamant Jace was that he didn’t care if they were brother and sister or not. Jace even tells Clary that they can be together anyway. And Clary bless her heart still obviously cares about Jace in a way that isn’t sisterly, but she can’t go there with him. She can’t disregard something so major just to indulge her desires. The whole thing is super awkward and the real driving force for me behind the first three books in the series.

Speaking of super awkward, Simon…bless him! Simon saw Clary’s feelings for Jace beginning to develop in City of Bones, but when it was revealed that Clary and Jace are brother and sister, he decides that it’s now or never to jump on the feelings that he’s always had for Clary. Obviously, Clary can’t be with her brother. So why not take this opportunity to step up and show her how he feels. While I won’t say that Clary was encouraging exactly, she definitely wasn’t discouraging to him either. She kind of let Simon take the reigns despite feeling a bit apathetic to the changes he’s bringing to their friendship all while knowing that the heat just isn’t there the way it was is with Jace.

One of the bigger things I forgot was the desperation that Jace feels. He’s so alone. He’s found out that his father is still alive, and he’s also a maniac set on destruction. He’s lost the possibility of being with the one person for which he’s developed the strongest feelings he's ever felt. While Clary can still be in his life, she can’t be with him the way he wants. And he’s lost his adoptive family as well. Although Isabel and Alec still have his back, Maryse has been cold to him since the revelation of him being Valentine’s son. Even Jocelyn who is supposed to be his real mother that he never knew he had is in a comma, and he finds that he just can’t connect to her. He feels like he’s lost and floundering. And I forgot how young he feels in this book. Jace even reaches out to Luke because Luke is essentially the only person left. His last option.

There were a couple of moments when I feel like having read City of Heavenly Fire things didn’t add up. Magnus makes a comment in City of Ashes about how he’s never seen one of the Night Children rise, but in City of Heavenly Fire we’re told that Magnus is the one who was there when Raphael dug his way out of his grave and offered him some donor blood to drink. Also, this one can probably be explained away, but the attack on the Silent City in City of Ashes doesn’t really explain how Brother Zachariah survived—apparently along with some other Silent Brothers—despite the statement being made that all the Silent Brothers were murdered by Valentine in this attack. That one was minor, but these are the kinds of things that bug me.

The scene at the Seelie Court is one of my all-time favorite scenes in the series. And if you have already read City of Ashes but haven’t read that scene from Jace’s POV on Cassandra Clare’s website then go read that as soon as you’re finished reading this review. I have no idea why that scene from his POV didn't make the final cut.

I find Cassandra Clare to be one of the most quotable authors that I’ve read over the last 5 years or so. So please bear with me while I share some of my favorites:

-"I don’t want to be a man," said Jace. "I want to be an angst-ridden teenager who can't confront his own inner demons and takes it out verbally on other people instead."

-“That you freed a possible criminal by trading away your brother to a warlock who looks like a gay Sonic the Hedgehog and dresses like the Child Catcher from Chitty Chitty Bang Bang?”

-“You can close your eyes and think of England if you like.”

-“You shouldn’t have kissed me like that.” He had been leaning against the door frame; now he stood up straight. “How should I have kissed you? Is there another way you like it?”

-"I remember you saying that growing up happens when you start having things you look back on and wish you could change. I guess that means I've grown up now."

-"Clary, I'm telling you he made his own decisions. What you're blaming yourself for is being what you are. And that's no one's fault and nothing you can change. You told him the truth and he made up his own mind what he wanted to do about that. Everyone has choices to make; no one has the right to take those choices away from us. Not even out of love.” "But that’s just it," Clary said. "When you love someone, you don’t have a choice."

-“Any uncle of yours is an uncle of mine darling sister...” –this one fittingly reminds me of Jamie and Cersie from A Song of Ice and Fire

Like Vampire Academy by Richelle Mead, there is so much that I want to discuss that falls into the category of spoilers. I don’t want to ruin anything for any readers that haven’t finished this series, so I’ll just say that I want to say so much more than I already have.

I feel like I’d be remiss without saying that I could do without the Magnus and Alec relationship. I’ve discussed how I feel about that before. I love each of the characters individually—especially Magnus—but the relationship doesn’t work for me.

City of Ashes is full of angst but the good kind. There’s emotion, forbidden and otherwise. I love the characters. I love the world building. And I even love the conflict, despite how awkward and uncomfortable it can be. City of Ashes gets 4.5 Stars. Have you read City of Ashes? What did you think? Let me know!