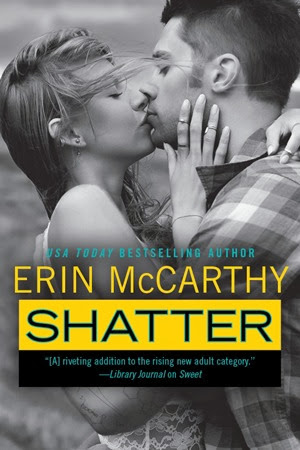 Goodreads description--From the USA Today bestselling author of True, Sweet, and Believe comes a tantalizing New Adult novel about finding love in the most unexpected ways…

Kylie Warner prides herself on being optimistic, but after finding her best friend in bed with her boyfriend and flunking chemistry, her upbeat attitude has taken a dive. Even an impromptu hook-up with her sexy new chemistry tutor only brightens her mood slightly. After all, it’s not like she’ll ever see the tattooed scholar again…

While he’s a whiz at complex equations, Jonathon Kadisch has trouble when it comes to figuring out women. So when Kylie tells him that she’s pregnant after their night of passion, he’s at a complete loss. He’s prepared to be a good father—unlike his own deadbeat dad—but he’s less prepared to fall for the genuine and alluring blonde bearing his child.

With emotions running high, Kylie wonders if Jonathon’s devotion is out of growing love or looming obligation. And when heartbreak threatens to tear them apart, Jonathon will have to fight for the only girl who’s ever made him feel whole….

I was so excited to get my hands on Shatter. This series has been much better than I expected. The new adult genre has fallen into so many patterns that 85-90% of the books written in this genre (at least that I’ve read) are pretty predictable. And I’ve enjoyed the True Believers series because each book has had an aspect that I found to be a little different than the others in the genre. Believe is still my favorite of the series even after reading Shatter though.

In Believe we find out that Robin slept with Kylie’s boyfriend, Nathan. Granted she was super drunk and has made every effort possible to change her behavior in a way that shows remorse for her actions. But this hasn’t stopped Kylie from having a broken heart. Even when people are remorseful, their actions still have an impact on us that doesn’t just go away overnight. The damage has been done. Relationships will never be the same and hearts have been broken. So we start Shatter with Kylie still reeling from her recent heartbreak. She finds herself struggling in her chemistry class and meets up with a tutor to help her pass her exam. One thing leads to the other and Kylie and Jonathan (aka Darwin) end up having a steamy night together.

As the description says, Kylie and Jonathan’s night together results in an unexpected pregnancy. Both thought they would probably never see each other again, but instead find themselves tied to each other for the next eighteen years at least. Jonathan is determined to be there for Kylie and his unborn child, but that doesn’t mean that anything more will come from this pregnancy. He wants to remain on good terms with Kylie for the sake of their child, but having anything more, even if he might want it, could lead to heartbreak and a strained relationship between them in the future. At the same time, the two find themselves falling for each other. But Kylie needs to know that Jonathan isn’t investing in a relationship with her just because she ended up pregnant. She needs to know that he wants to be with her regardless.

I liked the play on the differences between Jonathan and Kylie. He’s crazy smart with books and science, but he’s often a typical male when it comes to figuring out a woman—clueless. Kylie is a bit lacking when it comes to book smarts. She’s kind of what people refer to as a "dumb-blonde." Yet she’s not dumb at all. She might not get Chemistry or science, but she’s smart in many other ways. I loved how this became a struggle for them in their relationship. Kylie has her insecurities when it comes to being smart, especially with how far ahead of her Jonathan is in this area. And she has baggage from her past and recent breakup with Nathan. But she works to overcome this.

Although, I felt like Kylie and Jonathan’s situation was realistic. It has happened to hundreds and possibly thousands of couples throughout history afterall. I connected to them, yet their story wasn’t my favorite at the same time. I often wanted to get annoyed with Kylie’s waterworks. She cries so much, but then I had to remind myself that she was pregnant and hormonal afterall. I hate that this series is over. But I enjoyed Erin McCarthy giving us a brief update on where all of the couples from this series have found themselves and where they’re all headed in a way that felt authentic to Kylie and Jonathan’s story and not just a random “ten years later” kind of epilogue.

-“I’ll be really happy when these”…”skinny jeans go out of style.”

-Nothing like having to tell your chem prof that you’re pregnant with his grandchild.

-It was amazing to me that suddenly, within the span of an hour, my whole future had changed.

-For the first time, I realized the gap that would grow between my friends and I as surely as my baby would grow.

-I didn’t know how to play the game with someone like him, because I didn’t think that he knew that games existed.

-You’re not supposed to admit that your greatest ambition in life is to have a family.

Shatter gets 3.5 Stars from me. I enjoyed it. It was a quick read. I connected. But none of that particularly blew me away. It was a nice end to the series, but not my favorite of the series either. Have you read Shatter? What did you think? Let me know!