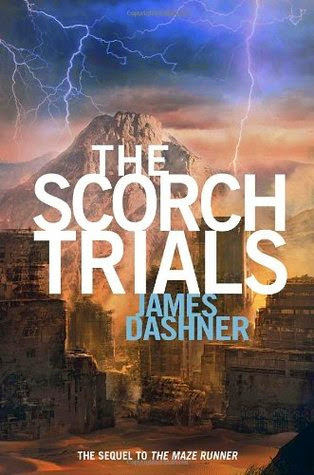 The Scorch Trials (The Maze Runner, # 2)

Goodreads description--Solving the Maze was supposed to be the end.

Thomas was sure that escape from the Maze would mean freedom for him and the Gladers. But WICKED isn’t done yet. Phase Two has just begun. The Scorch.

There are no rules. There is no help. You either make it or you die.

The Gladers have two weeks to cross through the Scorch—the most burned-out section of the world. And WICKED has made sure to adjust the variables and stack the odds against them.

Friendships will be tested. Loyalties will be broken. All bets are off.

There are others now. Their survival depends on the Gladers’ destruction—and they’re determined to survive.

I didn’t love The Maze Runner by James Dashner. I was curious about what was happening and how it would end, but the book was really slow for me. And there wasn’t much driving me to read it. I didn’t feel any burning need to know what was happening, and that’s essentially how I felt when I finished it too. Even though things ended in a bit of a cliffhanger, I wasn’t feeling a big pull to start the second book. I always felt like I would read it…at some point. Then I saw that the library had the audiobook version and so I figured that would be the perfect way for me to get it “read” and marked off my list.

Once I received the audiobook version from the library, I started it up and completed about 22% which equates to roughly 75ish pages. While The Scorch Trials does have an air of mystery about it, I still felt a disconnect from the storyline and the characters. I didn’t have a single urge to continue listening and uncover all of the secrets. I can’t pinpoint one element that I disliked other than simply not being connected to the story or characters.

And so I’ve come to the point in my reading life when I realize that it’s just not possible for me to read ALL THE BOOKS. Given my lack of connection to the events and characters of The Scorch Trials, I decided to mark this one as DNF and move on with my life. Have you read The Scorch Trials? Did you love it? Or did you have the same problems connecting as I did? Let me know!