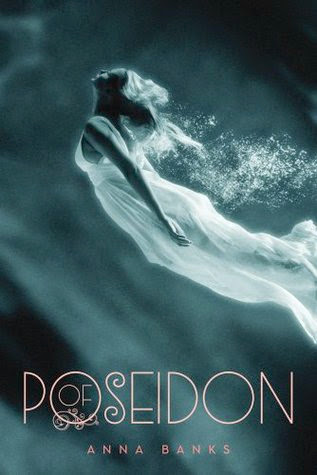 *Note: The above links to Amazon, Book Depository, and Booksamillion.com are affiliate links.

Goodreads description--Galen is the prince of the Syrena, sent to land to find a girl he's heard can communicate with fish. Emma is on vacation at the beach. When she runs into Galen—literally, ouch!—both teens sense a connection. But it will take several encounters, including a deadly one with a shark, for Galen to be convinced of Emma's gifts. Now, if he can only convince Emma that she holds the key to his kingdom...

Told from both Emma and Galen's points of view, here is a fish-out-of-water story that sparkles with intrigue, humor, and waves of romance.

I got Of Poseidon as one of the free Sync Audiobook downloads from last year. I remember seeing mixed reviews about Of Poseidon, but I wasn’t about to turn down the opportunity to listen to it for myself. Surprisingly, I’ve only ever read one other mermaid book--Sea Change by Aimee Friedman. I don’t have anything against mermaids in general, but I guess as paranormal/mythological concepts go, mermaids have always been a bit of a stretch for me. And it’s not so much the idea of mermaids themselves as the mixing of mermaids and humans as well as the transition from ocean to land that bothers me. I pumped myself up for this read by telling myself that if I can buy shapeshifting of any kind then mermaids ought to fall into that category as well.

Initially, I was put off by the New Jersey accent the narrator, Rebecca Gibel, was doing for Emma’s best friend Chloe. Fortunately, this wasn’t an issue I had to deal with throughout the whole book. While I’m thinking about the narration, the book itself is narrated by both Emma and Galen—the leading male character—yet the audiobook version only had the Rebecca Gibel reading for both parts. I found this a little odd, especially when transitioning from Emma’s narration to Galen’s. It always caught me off guard and took me several sentences usually to figure out the point of view changed. Adding a male narrator for Galen’s parts would have solved this problem easily.

As the description says, there’s an episode involving a shark that leads Galen to believe that Emma might not be human. She just might be Syrena just like him—or well…maybe not just like him. In this instance, Emma displays an ability known as the “gift of Poseidon.” Only Syrena descended from Poseidon himself can possess the gift and Galen is descended from Triton, not Poseidon. But Emma lacks some other key Syrena traits that prevents Galen from thinking she is in fact Syrena. Galen, as the Syrena-Human Ambassador for his tribe, decides to spend some time with Emma in order to find out what she really is.

Obviously, the Syrena have a different culture than huamns. If Emma is “of Poseidon” then his brother and the now Triton king, Grom, will have first dibs at mating with Emma. Not Galen. But Galen can’t seem to keep himself from falling for Emma which leads him to keeping her a secret from the Syrena as a whole. Emma takes not liking to be told what to do to a whole new level. Anytime Galen tries to tell her something she needs to do, she digs in her heels and does the opposite just out of spite for being given instructions. Emma doesn’t know about her potential fate of mating with Grom so she doesn’t understand why Galen won’t can't attempt a relationship with her and therefore, jumps to the conclusion that he doesn’t in fact like her.

Rayna and Toraf were likable characters. I took me a while to warm up to Rayna. She was a bit rough around the edges, but Toraf was easily likeable from the first introduction. I liked their relationship with each other as well.

I found myself laughing out loud a couple of times during my listen of this audiobook. I cheesed. I giggled.

The biggest “surprises” weren’t that big of a shock to me. I felt like they were easily spotted. What Emma really is. The truth about her parents and Emma’s stalker. All of that wasn’t as big of a secret as it should have been. I felt like the characters were missing the obvious in both of these instances.

Posted by Somewhere Only We Know at 9:27 AM