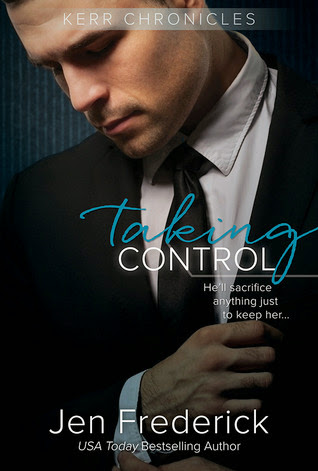 Goodreads description--A slip of a woman holds me in her hands. Every dream I had of revenge, the very juice that powered my engine from age fifteen to now, is swirling down the drain at our feet. I can deny her nothing. The only thing I fear is her flight. That she will wake up from her emotional fog and realize that I am a manipulative son of a [...] who is more trouble than he’s worth.

That I’ve bought my way into her heart and life.

That I’ll lie, steal, cheat, and kill anything that would take her from me.

If the very heart of you is threatened the only rational response is to strike back harder until your enemies quake at the very whisper of your name.

Taking Control makes the fifth book by Jen Frederick that I’ve read and reviewed. And I’ve enjoyed each one. However, I feel like each book has gotten more and more graphic. I’ve discussed pretty frequently how I have a pretty low graphic tolerance, and so Taking Control was really a struggle for me in this area. Not only was it overly graphic in my opinion, but I also thought Taking Control was utterly unrealistic when it came to Tiny and Ian’s physical relationship. Maybe the rest of the world knows something that I don’t know, but I find 4-5 sexual encounters PER DAY EVERY DAY to be a bit extreme. Poor Tiny man. I mean seriously. How can the girl even walk? A personal request from me to Jen Frederick would be to scale back to a more realistic approach to the physical relationship in the future, and to tone it down when it comes to graphic description as well. Am I alone here?

Taking Control is narrated by both Ian and Tiny. I enjoyed seeing both sides of the story as I usually do. And there was a clear distinction between the two voices. I always applaud authors who can dual narrate well and Taking Control certainly fell into that category for me.

I don't think this is really a spoiler, but I just see this so rarely that I have to comment on it. Usually in a series the couple spends the first book falling in love and finding a way to be together. In trilogies the second book is where the couple spends time apart or they breakup. They realize for whatever reason that they can’t be together either simply physically in the same location or there's some reason they need emotional space, but they’re also miserable. And then the third book is about them finding a way back to each other. Maybe this wasn't the case because the Kerr Chronicles series isn't a trilogy, but I LOVED that the main conflict of Taking Control didn’t involve Ian and Tiny having relationship problems. They faced the major conflict of this portion of their story together rather than spending half the book alone and miserable. Kudos to Jen Frederick for that. I love to see a couple working together to overcome their struggles instead of working against each other.

I still love that Tiny isn’t your typical leading female character. Yet I was still struggling with her being so against Ian’s money. I mean obviously she shouldn’t be with him BECAUSE of his money, but we already know that’s not the case. And fighting him on it has proven useless as well. Just get over it already. Ian is a loveable guy even though as I've already discussed his expectations for their physical relationship is beyond ridiculous. He's cave-man "I want to protect my woman" in the best possible way. And while things do get physical (violence wise) a couple of times (not against Tiny, but in her protection), most of the protection he provides her comes in other ways.

I had some struggles with Taking Control. It wasn’t anything too bad, but Taking Control wasn’t my favorite by Jen Frederick either (that would be Undeclared if you're curious). I enjoyed that the conflict wasn’t about Ian and Tiny’s relationship, but my biggest problem revolved around the unrealistic physical relationship that they had. Taking Control gets 3.5 Stars from me. Have you read Taking Control? What did you think? Let me know!