If I Stay - Movie Review 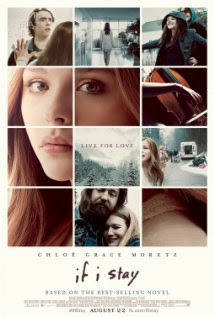 Written By: Shauna Cross (screenplay), Gayle Forman (based off the novel by)

Here's my book review of If I Stay.

Ok so it's been a year since I've read If I Stay. And I've probably read 150ish other books since. I say that not because If I Stay wasn't memorable--it definitely was--but because I'm definitely missing some of the finer details of the book. I can usually only remember all the little details when I've read a book multiple times, and even though I can see myself reading If I Stay multiple times, I just haven't had the opportunity to do that yet. So...how that relates into the movie review is that I can't accurately tell you how much was different from book to movie. I can tell you that there were some differences--there always are--but I feel like I probably missed most of them. That being said, I don't think anything too major was different.

I teared up while reading the book, but really the only tears I shed was during the scene with Mia's grandfather. You guys know the one. But while watching the movie, I was not quite a wreck...but tears were shed at mutliple scenes. Shoot, pretty much from right before the scene with Mia's grandfather (*sniff* Teddy) until the end I was misty eyed and sniffling. Yet, even though I found myself more emotional while watching the movie, I still think If I Stay was better as a book than a movie. But isn't that the way it usually happens?

The actors you guys...those guys made this movie. Seriously. Mia's parents, played by Mireille Enos and Joshua Leonard, were so spot on. They're quirky. They are NOT what you picture parents to be. They push Mia out of her comfort zone. They curse. They encourage Mia to go out and party and stay out all night. While I won't be adopting my own parenting techniques after them, you could see the love they have for their family and friends. It just fit. And the "we made that scene" gave me chills. Jakob Davies plays Teddy, and he did a cute job. I wanted to pinch his cheeks.

But I know you guys really want to know about Chloë Grace Moretz (Mia) and Jamie Blackley (Adam). *sigh* You guys, they did so good. Their chemistry was pretty spot-on. Mia being all shy and a bit awkward, but totally in love with playing music. Chloë Grace Moretz did such a great job! I bought her as this character. There was never a time when I was pulled out of what was happening on the screen. And I never had a moment that I didn't believe her conviction in playing Mia. Even the cello scenes were pretty awesome. And Adam...Jamie Blackley...wow. He put that character on and I don't know if he'll ever be able to take Adam off again. I just don't even have words. The fight scenes were intense and emotion-filled. Even when you wanted to smack one or both of them. The romance scenes were pretty great too.

And I really felt like the creators were doing everything they could to set up If I Stay for the sequel, Where She Went. I felt like this might be the biggest area where the creators made changes. I thought they pulled in too much conflict between Mia and Adam from Where She Went, but I could just be mis-remembering If I Stay. Either way, I definitely think they have plans to make the second book into a movie as well. And I'm jumping up and down for that.

If I Stay (the movie), gets 4 Stars from me. The actors totally embraced these characters and brought them to life. I didn't see too many changes that put me off. And I found seeing If I Stay (the book) turned into a visual format brought out even more emotion from me. Have you seen If I Stay? What did you think? Let me know!

Email ThisBlogThis!Share to TwitterShare to FacebookShare to Pinterest
Labels: 4 Stars, GayleForman, If I Stay, If I Stay Movie, IfIStay, movie, movie review, Where She Went