In Her Wake - Review 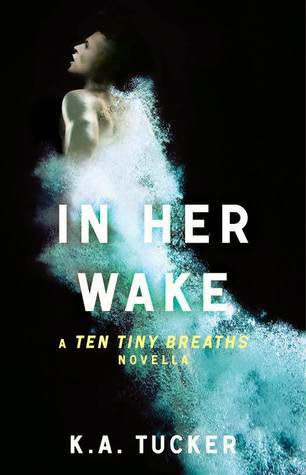 Goodreads description--Before you knew him as Trent in Ten Tiny Breaths, he was Cole Reynolds—and he had it all. Until one night when he makes a fatal, wrong decision…and loses everything.

When a drunken night out at a Michigan State college party results in the death of six people, Cole must come to terms with his part in the tragedy. Normally, he’d be able to lean on his best friends—the ones who have been in his life since he could barely walk. Only, they’re gone. Worse, there’s the shattered body of a sixteen-year-old girl lying somewhere in a hospital bed, her entire life ripped from her because of a case of beer and a set of keys.

Everyone assures him that they know it wasn’t intentional, and yet he can’t ignore the weight of their gazes, the whispers behind his back. Nor can he shake the all-consuming guilt he feels every time he thinks of that girl who won’t so much as allow him near her hospital room to apologize. As the months go by and the shame and loneliness festers, Cole begins to lose his grip on what once was important—college, his girlfriend, his future. His life. It’s not until Cole hits rock-bottom that he can begin to see another way out of his personal hell: forgiveness.

I wasn’t 100% sure what In Her Wake was going to be. I knew it would be from Trent’s POV, but I wasn’t 100% sure if it was pre-Ten Tiny Breaths or more of a retelling of Ten Tiny Breaths or a mixture of both. In Her Wake is a true prequel. This is Trent, where he was and what he went through, from slightly before the car accident until he follows Kacey to Miami. And honestly, I really appreciated that. I like for a book to be what it’s advertised to be.

In Her Wake isn’t a happy book though. As we know from Ten Tiny Breaths, Trent and Kacey are both involved in the same car crash. They’re both also the sole survivors from the vehicles they were in. Trent and his friends were drinking at a college party. Trent was supposed to be the designated driver, but he ended up drinking that night. He didn’t get behind the wheel, but he did let his best friend Sasha behind the wheel impaired. Granted, Trent wasn’t aware of how impaired Sasha was. Kacey was in the car on her way home from a rugby game with her parents, her best friend Jenny, and her boyfriend Billy. So I went into In Her Wake knowing that the accident was coming and knowing some of Trent’s actions that follow the accident. But what I didn’t really expect or prepare for was how deeply sad Trent’s story would be. It’s so easy to judge from afar. To see people’s mistakes and judge them—condemn them for it—especially if we’re collateral damage and hurt in the process. What I’ve learned from reading books that show both characters’ POVs is that I’m a lot more lenient with a character if I can see inside their head. In this case, Trent is so deeply broken after the accident. He feels so much guilt. It will never bring back those who didn’t survive the accident, but it also doesn’t make him less than human. He is still a person who is struggling and needs forgiveness.

Man, I feel like these characters are real. I feel like this is a story that’s happened in real life. I know that there are people out there who have experienced very similar events in their own lives. And it’s a testament to KA Tucker and her writing that it does feel so real to me. One of the best compliments that I can give to In Her Wake is that it planted within me the desire to re-read Ten Tiny Breaths so much that I have actually done just that. I’ve neglected all my reading responsibilities, and the backlog of other review books that I desperately need to get to, in order to re-read a book I’ve already experienced (and loved). I’m a re-reader anyway—when I can find the time—but In Her Wake made me decide to MAKE time.

I will say, that even though Trent came off a bit unhinged and cuckoo in Ten Tiny Breaths when Kacey found out who he was, In Her Wake probably didn’t help that any. I had no idea how much stalking Trent actually did. Seriously. I mean I’m not sure I can blame him—being obsessed with trying to make the life better of the one person who you had a hand in taking everything from--but he crossed some major creep boundaries lines. I can see where readers who struggle with this type of male character will not respond to this well at all. BUT, that didn’t bother me really.

In Her Wake gets 4.5 Stars from me. I didn’t all out cry, but I got a little misty-eyed. I don’t think In Her Wake was quite as good as Ten Tiny Breaths, but since I’m doing a re-read, I’ll be able to report back on that in more detail later. I’m also not sure why In Her Wake was classified as a novella since it’s around the same length as Tin Tiny Breaths. Have you read In Her Wake? What did you think? Let me know!