Anatomy of a Misfit - Review 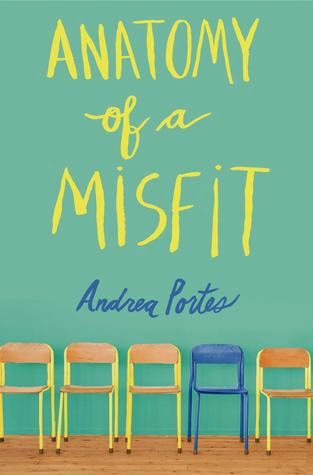 Anatomy of a Misfit wasn’t anything that I was expecting it to be really. Granted most of that is my own fault. You guys know I read the book descriptions, add books to my list, and then forget what they’re supposed to be about by the time I get around to reading them. Which is both good and bad. I like not remembering what to expect. Except for those times when I remember the book descriptions incorrectly. Whoops. That’s what happened this time. I forgot that Anika was the third most popular girl in school. I was thinking she wasn’t popular at all. And while it didn’t make a huge difference in the overall book experience, it just had me thinking that the book description wasn’t very accurate. Until I went back and re-read it. One aspect that the description was dead on about: “Readers will ride the highs and lows alongside funny, flawed Anika—from laughter to tears, and everything in between.”

See I struggled with this book. And I’m torn on how I feel about it which is making it really hard to write this review. I had the highs and the lows. Aspects about this book I loved and adored. And other aspects I found myself sighing aloud, rolling my eyes, and grinding my teeth in frustration. Anika was humorous, but boy was she flawed. I never fully laughed and I never fully cried, but I felt pretty much all of the emotions in between. Upon arriving at the end of this book, Andrea Portes says that she wrote this book because she wished she could go back and give the message of this book to her younger self. I think that’s noble and I think there are some great lessons that teenagers could pull from this book, but it wasn’t always a pleasant journey, nor was it supposed to be.

The main character, Anika, has a distinct voice. I loved the way she narrates as if she’s talking directly to the reader, telling the reader her story. It reminds me of how I wrote as a child when I piddled around with writing fiction. Yet since it was unlike anything I’d read in books back then I figured I was doing it wrong. Andrea Portes just reconfirmed that different isn’t always wrong. Sometimes different can be beautiful—though her writing is 100% better than my childish ramblings. And sometimes I loved Anika’s voice, thoughts, and feelings. Other times, I wanted to smack her in the head. She talks down to herself indicating that she doesn’t have the highest self-esteem. Typical of a teenage female. She’s extremely caught up in what others think about her versus what she should be thinking about herself. Because she’s “the third most popular girl in school” she allows fear of the “first most popular girl in school”, Becky, to dictate her behavior—how she treats other people and who it is “acceptable” to be friends with. Never too friendly to anyone more popular than herself or *gasp* more popular than Becky, but never too friendly with anyone less popular than herself either. Maybe just never too friendly period.

Anika has a soft side. She feels bad for others who have been bullied or been on the receiving end of Becky’s torture and ridicule. She even branches out in some cases to try to reach out to those people. But Anika herself can be just as mean and ruthless towards others, more so in her thoughts than in her behavior.

Anatomy of a Misfit as a whole felt like a political statement. I’m aware than an author can write and create characters with beliefs that are different from his or her own, and perhaps that could have been the case, but I just don’t really buy that. It almost felt like Andrea Portes was following a check list of political statements. We’ve got anti-bullying. We’ve got anti-racism. We’ve got anti-Christian, anti-God. We’ve got anti-guns. So on and so on. Political statement left and right. I’ve said before that I don’t really enjoy politics, and I definitely don't enjoy my reads to be bogged down with them. I could have let all of the other points go without mentioning them, had it not been for the anti-God/anti-Christian comments. Is bullying bad? Sure. Is racism bad? Of course. Do I want to get into gun-control debates on my blog? Of course not. But I found myself getting increasingly annoyed with the Christian related aspects.

-Shelli’s mom is a real freak. Like, she’s a total Christian and is always talking about what would Jesus do, and the real meaning of Christmas, and how to hate gay people. If she only knew that before her very eyes she was raising her own personal Mary Magdalene, her eyes would probably roll into the back of her head and she’d start speaking in tongues.

Granted, Shelli’s mom does seem a bit out there even for me, as a Christian, considering she apparently took issue with Anika’s mixed heritage and a couple of other aspects mentioned. But why are all Christian characters portrayed as crazies by “non-Christian” fiction? Ok I take that back, I recently read V is for Virgin by Kelly Oram where two characters were just normal, good people, without being portrayed as “freaks” for their beliefs. But one book out of hundreds. Not good odds.

-To be honest, she may be kind of scared of the register. Or maybe she can’t add. She is a Christian. I don’t think they believe in math.

-“Mom, how come we don’t go to church?” “Oh, honey, that’s just a bunch of nutjobs.” … “Bunch of hypocrites. Sitting around judging all the time.”

-Shelli’s not even here today, ‘cause it’s Sunday and her nutjob Bible thumper of a mom won’t let her work on the Lord’s Day or whatever, so it’s just left to the sinners Tiffany and me to work on this holy day and burn in hell together.

-Twenty or so kids go over to the leader’s home and eat cookies, drink punch, and sing songs. The song lyrics are projected, written out in pen so you can sing along. The leader, or her husband, play guitar. It’s all fun and everyone is having a big old time. Then, the leader, or a guest speaker, gets up and talks about Jesus Christ our Lord and Savior. At the end of each session you are invited, if you so choose, to get up and say, “My name is so-and-so and Jesus Christ is my Lord and Savior.” Now, how do I know this? Because I have attended, one of these Jesus parties and I know firsthand that it is actually extremely enjoyable until Nerdlinger, our particular Spring Youth leader, gets up there and starts talking about Jesus. They should just stick to the songs and the punch.

-I’m kind of surprised I didn’t stand up and find Jesus. I’m sure he was around there somewhere.

But wait…Anika believes in God when it’s convenient for her. When she needs something from him. Maybe it’s just Jesus she has a problem with?

-…so I could just stare at the ceiling and ask God what in the world to do. I know a lot of people think that whole God thing is a joke but I just get a feeling he’s up there somewhere.

She’s bad mouthing, disrespecting, judging and hypocritical herself. It reminds me of James 1:5-7 “If any of you lacks wisdom, you should ask God, who gives generously to all without finding fault, and it will be given to you. But when you ask, you must believe and not doubt, because the one who doubts is like a wave of the sea, blown and tossed by the wind. That person should not expect to receive anything from the Lord.”

The other characters were kind of the same way. I loved Logan. I hated Becky. But pretty much everyone else was just the same. Flawed enough to keep them from being unrealistic, but too flawed to feel wholly likeable. Shelli, Anika’s mom, Anika’s dad, Anika’s step father…