To All the Boys I've Loved Before - Review 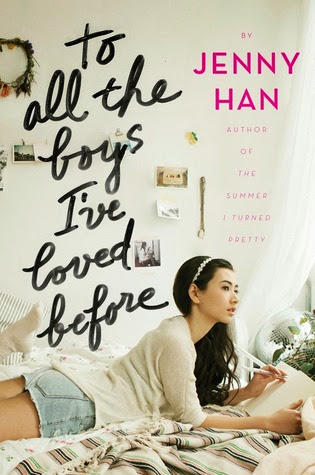 Goodreads description--To All the Boys I’ve Loved Before is the story of Lara Jean, who has never openly admitted her crushes, but instead wrote each boy a letter about how she felt, sealed it, and hid it in a box under her bed. But one day Lara Jean discovers that somehow her secret box of letters has been mailed, causing all her crushes from her past to confront her about the letters: her first kiss, the boy from summer camp, even her sister's ex-boyfriend, Josh. As she learns to deal with her past loves face to face, Lara Jean discovers that something good may come out of these letters after all.

I wasn’t sure what to expect from To All the Boys I’ve Loved Before. Rachel from Paper Cuts reviewed it and rated it highly. And it just so happened that Amazon had it on sale for $1.99 at the time so I snagged it. And it turned out to be the perfect read for me on my beach trip. I needed a quick, fun, contemporary read and this one fit my mood perfectly. I will say quickly that for some reason I was thinking our main character, Lara Jean, was older. I guess because the title indicates that there are multiple boys that Lara Jean has loved before which indicates a full life. Yet this is more of a crush kind of love—at least her earliest letters.

As the description says, Lara Jean hasn’t told any of the boys she’s had a crush on before that she’s actually liked them. She writes a letter to each one, seals it, and hides in in a hat box that her late mother gave her. One day this guy at school, Peter, comes up to her and confronts her about the letter he got in the mail. Which was amusing and awkward. Poor Lara Jean. I cannot imagine how embarrassed I would have been had I been her. And so she rushes home to find that none of the other letters are in her hat box either. As a matter of fact her hat box is missing. And while it would be embarrassing enough for all her past crushes to get a letter from her, what she’s really concerned about is her friend Josh. He’s actually her sister’s recent ex-boyfriend. They broke up right before she moved to Scotland to attend college. Lara Jean and Josh were friends before Josh ever started dating her sister, Margot. And Lara Jean kept her feelings about Josh to herself for the sake of her sister.

I really loved the way Jenny Han approached this book. Lara Jean has these feelings that she can’t ever act on. A guy that your sister dated, even if you had feelings for him first, is just off-limits. That’s part of the girl code. You wouldn’t date a guy that a friend dated under normal circumstances and that goes doubly for a guy that your sister dated. But Lara Jean wants to be Josh’s friend too so she has to find a way to make it back to normal with him. Peter comes up with the idea of doing a fake relationship with her. He can use her to make his ex-girlfriend Genevieve jealous and Lara Jean can use him to help her get things back to normal with Josh. I loved the relationship that Peter and Lara Jean had. There was no slight romantic tension between the two of them. They were both on a mission, but I loved how they slowly got to know each other and by default their relationship with each other changed. It felt a bit unoriginal, but in one of those ways that is done so well that I can’t find it in me to care that the idea isn’t completely original.

Not only was this book about a girl who’s dealing with past feelings and new, changing romantic feelings, but this book is also about a family. It’s about sisters. Margot, Lara Jean, and Kitty’s mother passed away several years ago. Their father is a doctor and works crazy shifts. Margot really stepped up to take responsibility for her younger sisters and to help her father out around the house. But now Margot is getting ready to move overseas to go to college. Lara Jean is going to miss her so much, but she also has to step up to the role that Margot’s been filling in order to help her father out and take care of Kitty. I loved seeing the relationships between this family. Their father isn’t as present as I would like, but it felt like he wanted to be. And I loved seeing Lara Jean in the middle of her two siblings. So we’ve got the relationship with an older sibling and the relationship with a younger sibling. And sisters no less. Considering I have a sister, this story was especially dear to me. This felt like the best sister relationship story that I’ve read—at least when it comes to being even remotely similar to my own sister relationship. There’s love and friendship, but there’s rivalry and fights as well.

I’d hoped I wouldn’t cry, because I knew Margot wouldn’t, and it’s lonely to cry alone, but I can’t help it.

…it’s a lot of responsibility to hold a person’s heart in your hands.

If you were mine, I would never have broken up with you, not in a million years.

I want to be his lighthouse keeper while we wait for Margot’s return. But it’s hard. Harder than I thought.

To belong to someone—I didn’t know it, but now that I think about it, it seems like that’s all I’ve ever wanted.

When someone’s been gone a long time, at first you save up all the things you want to tell them. You try to keep track of everything in your head. But it’s like trying to hold on to a fistful of sand: all the little bits slip out of your hands, and then you’re just clutching air and grit. That’s why you can’t save it all up like that. Because by the time you finally see each other, you’re catching up only on the big things, because it’s too much bother to tell about the little things. But the little things are what make up life. … Now everything feels like you had to be there and oh never mind, I guess it’s not that funny.

Sisters are supposed to fight and make up, because they are sisters and sisters always find their way back to each other.

There’s a specific kind of fight you can only have with your sister. It’s the kind where you say things you can’t take back. You say them because you can’t help but say them, because you’re so angry it’s coming up your throat and out your eyes; you’re so angry you can’t see straight. All you see is blood.

Email ThisBlogThis!Share to TwitterShare to FacebookShare to Pinterest
Labels: 4.5 Stars, Contemporary, Jenny Han, sisters, To All the Boys I've Loved Before, YA