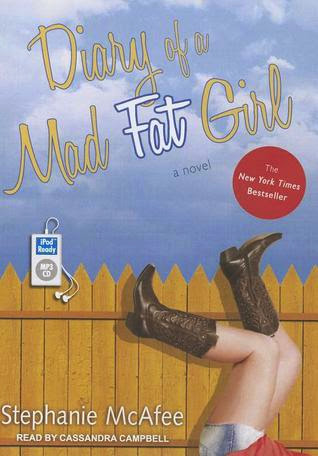 Diary of a Mad Fat Girl

Goodreads description--Graciela "Ace" Jones is mad-mad at her best friend Lilly who cancels their annual trip to Panama City for mysterious reasons; at her boss Catherine for "riding her ass like a fat lady on a Rascal scooter;" at her friend Chloe's abusive husband; and especially at Mason McKenzie, the love of her life, who has shown up with a marriage proposal one year too late. Ace is never mad, though, at her near-constant companion, an adorable chiweenie dog named Buster Loo.

Ace's anger begins to dissipate as she takes matters into her own hands to take down Chloe's philandering husband-and to get to the bottom of a multitude of other scandals plaguing Bugtussle, Mississippi. Then, she starts to realize that maybe Mason deserves a second chance after all.

With a sharp and distinctive voice, Stephanie McAfee delivers a hilarious and fast-paced tale about Ace Jones and her two best friends-thick as thieves and tough as nails-navigating Southern small-town politics and prejudices, finding love, and standing up for each other all the way.

My sister recommended Diary of a Mad Fat Girl to me because she knows that I love a book that can make me laugh. When I went to mark Diary of a Mad Fat Girl as “currently reading” on Goodreads, I noticed this book only had a 3.49 overall rating. Ugh oh! Not a good sign. I typically skip anything that has an overall rating of 3.5 or below on Goodreads. I mean seriously. Who has time for books where the AVERAGE rating is less than that? Not I. But I already had the book in my possession and I didn’t have anything else to listen to at the time, so I thought, “why not?” I typically listen to books on audio that I feel like spending my valuable and limited reading time might be wasted. Some turn out to be real gems, but most are ones I’m interested in, but don’t want to spend the time actually reading.

Going through Diary of a Mad Fat Girl I often wondered why this book had such a low rating. Ace was mostly likeable and her friends, Lily and Chloe, were as well. But as I progressed through the book I began to understand why. This girl is a bit crazy. As the title suggest, Ace is overweight. We’re not really told how overweight, but I didn’t picture her to be huge, just maybe slightly above average (or more like average in America). And being overweight, there’s no surprise that Ace has some self-confidence issues. She compares herself to other women, and she sees herself falling short. Other women are more beautiful. They’re skinnier. They’re more desirable—despite Ace not really having a lack of male attention. But Ace uses this as a reason to put down other women. Granted she does most of that in her own head, but it annoyed me nonetheless. Of course, that’s pretty dead on in a lot of cases. I’ve always struggled with my weight, but I did go through a period of time when I got pretty fit and skinny. I worked my tail off to get there, and as someone who has been both overweight and fit, I can appreciate how hard it is to stay there. And so when Ace mentally berates the “gym bunnies” for being skinny, and looking cute, and running on their fancy treadmills…well….that just didn’t sit right with me.

At the same time, Ace has had an on-again-off-again relationship with Mason for years. She’s pretty much always been in love with him. But she lets her insecurities get the best of her. Again, I found this to be realistic, but I also found it to be really sad and really frustrating to read about. The back and forth between Ace and Mason was at times truly painful to listen to. And I wanted to beat her with my shoe when a couple of specific events occurred. Thank goodness for Ace and Mason’s once shared dog, Buster-Lou (sp?). Without him and his disapproval of another specific character, Ace and Mason’s story might have ended very differently—as sad as that is to say.

Diary of a Mad Fat Girl had several separate story lines going on at the same time. I guess that’s yet again realistic, but can also be frustrating when there’s too much going on at once. Oh and watch out for potty mouth, this book doesn’t lack that. At. All.

Overall, Diary of a Mad Fat Girl served it’s purpose by making me laugh and helping me pass the time. I didn’t hate it, but I didn’t love it. Mostly I found myself torn on most aspects of it that left me feeling like 3 Stars is a good rating for each aspect. Have you read Diary of a Mad Fat Girl? What did you think? Let me know!