V is for Virgin - Review 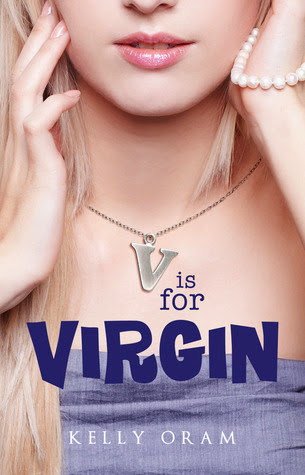 Goodreads description--When Val Jensen gets dumped for her decision to stay a virgin until marriage, the nasty breakup goes viral on YouTube, making her the latest internet sensation.

After days of ridicule from her peers, Val starts a school-wide campaign to rally support for her cause. She meant to make a statement, but she never dreamed the entire nation would get caught up in the controversy.

As if becoming nationally recognized as “Virgin Val” isn’t enough, Val’s already hectic life starts to spin wildly out of control when bad boy Kyle Hamilton, lead singer for the hit rock band Tralse, decides to take her abstinence as a personal challenge.

How can a girl stay true to herself when this year’s Sexiest Man Alive is doing everything in his power to win her over?

My sister-in-law recommended V is for Virgin to me because she loved the message of this book. And I knew that if she was so enthused about it then it would be one that I needed to pick up. She ended up loaning it to my sister before I got a chance to read it and my sister read 75% of it in one day. Another sign that this would be a book that I would enjoy. And well…it was. When I finally got my hands on V is for Virgin I devoured it. I feel like there is absolutely so much good about V is for Virgin that I’m not sure I can cover it all in my review.

1. This book is about NOT having sex. So frequently in YA, and especially NA or adult books, sex is almost the focus. But I absolutely LOVED that this is a book about a character making the decision NOT to have sex before marriage and sticking with it. People claim that not having sex before marriage is old school. It’s out of style. It doesn’t matter anymore. Just as long as it’s safe sex. But no. That’s just not the case. I applaud and rejoice in a book that is solely focused around this topic. Yet V is for Virgin does give a realistic approach to this topic as well. It’s not easy for Valerie to walk this path, and I loved seeing how true this aspect was.

2. Valerie is the exact type of female character I like to read about. While she isn’t fighting evil, undead vampires like my other favorite leading female character (Rose Hathaway from Vampire Academy), Valerie is kicking butt and taking names in other ways. Valerie gets dumped for telling her boyfriend at the time that she has no plans to sleep with him. Her plan is to wait until marriage. So kudos to her number 1 for sticking to her guns enough to tell him about it. Then despite the lies he spreads about her at school, and his rebound in her face with another girl, she stands up and tells the entire lunchroom where she stands. After relentless bullying, being made fun of, and ostracized, she still stands strong. Although being pursued persistently by a young rock star who wants to change her mind on these views, she still stands her ground. Because of the attention of said rock star, Valerie is thrown into the public eye globally. But she doesn’t shrink. She doesn’t go into victim mode. She doesn’t rage against the unjustice of it all. No she stands up and takes the harassment from all sides like a champ, and she turns it all around and directs it into a worthy cause for all the people who didn’t feel strong enough to stand up for themselves. I just pray that if I have any daughters (sons too, but especially daughters), they learn to respect themselves as much as Valerie.

4. Valerie isn’t swayed from her quest for any reason. Even though she has a rock star throwing himself at her, and purposefully trying to break her resolve to remain a virgin, Valarie knew who she was. She knew what she wanted. And although her path was never easy, I respected the crap out of her for the entire journey. There will always be people who seek to sway you from your mission just for the sake of being able to do so. But Valerie wasn’t having it. She knew that doing so would make her hate herself and Kyle for persuading her off course.

5. This book felt real. I feel like I kind of already said this. I mean obviously some aspects are exaggerated, but the teenage reaction to a peer choosing not to have sex felt very real. Kyle felt very real. Even though the story felt unrealistic (the rock star pursuing the normal teenage girl), it felt extremely authentic at the same time. The human experience connected me almost immediately.

6. Great characters. I connected with every single character in this story. I understood them. I felt like I knew these people. I grew up with them. I was hit on by them. I didn’t even think about dating some of them. Was friends with a few of them. Not so much with a few others. I loved Cara at first. I still connected with her throughout the story, but at the same time, I equally hated and loved seeing her friendship with Valerie drift apart with Cara’s new relationship and Valerie’s mission. Robin, Isaac, Stephanie, Kyle, Shane, even Olivia. Great characters.

I don’t know that I really have anything bad to say about V is for Virgin at all.

Favorite quotes (too many...sorry, but I couldn't stop):

-He was practically irresistible. His only flaw was that he knew it.

-We shouldn’t have to be ashamed or afraid to say no to sex. Becoming sexually active is a huge decision. It’s not one we should let the world or even our own boyfriends make for us.

-“But you didn’t jump. You fought your way back through the crowd to higher ground. You forced people to see it your way—to respect you.”

-“No, I’m sure it’s true, but making things cool is one thing. You’re the kind of person who can make things important.”

-“She’s not a machine, Olivia,” Isaac snapped. Olivia shrugged unsympathetically. “She made herself a role model. Her actions have consequences now.”

-“You don’t have anything to be sorry for. I’m so proud of you. We just need different things.”

-“…I want sex to be more than that. My body—my virginity—is a part of me that no one in the world besides me knows. It’s something that once I give it away, I can never take it back. I’m not just going to hand it over to someone for a few moments of physical pleasure. I want the person I finally share all of myself with to be someone I trust completely. Someone who understands me, and loves me, and who I love just as much.” “Yeah, but why marriage? You don’t think you can find someone who loves you without being married to them?” “I think that if I truly found someone that loved me like that, he’d be willing to marry me. He’d be willing to wait for me. If whoever he is isn’t willing to commit his life to me, then he doesn’t deserve to share that experience with me.”

-“I want my virginity to mean something to both me and the man I spend my life with. Think about it. How would it make you feel if I decided to let you be the one person that knows me so intimately? How would it make you feel to know that no one else was allowed to touch me? That no one else ever had? Just you.” …“That’s why I’m waiting. Would you really begrudge me wanting to have that kind of connection with someone?”

-“Is sex really that vital? Am I really not worth waiting for?”

-“I know exactly who I am, and yet I don’t know myself at all. It makes no sense.”

V is for Virgin gets 4.5 Stars from me. I can’t quite give it the perfect 5 Star raiting, but it’s so close. One of my favorite reads this year. And one book that I think every young female needs to read. Have you read V is for Virgin? What did you think? Let me know!

Email ThisBlogThis!Share to TwitterShare to FacebookShare to Pinterest
Labels: 4.5 Stars, Contemporary, Kelly Oram, V is for Virgin, YA, Young Adult