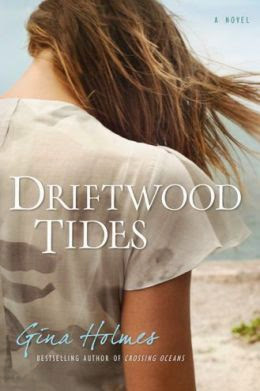 Goodreads description--He made himself an island until something unexpected washed ashore.When Holton lost his wife, Adele, in a freak accident, he shut himself off from the world, living a life of seclusion, making drifwood sculptures and drowning his pain in gin. Until twenty-three-year-old Libby knocks on his door, asking for a job and claiming to be a friend of his late wife. When he discovers Libby is actually his late wife's illegitimate daughter, given up for adoption without his knowledge, his life is turned upside down as he struggles to accept that the wife he'd given saint status to was not the woman he thought he knew.Together Holton and Libby form an unlikely bond as the two struggle to learn the identity of Libby's father and the truth about Adele, themselves, and each other.

I enjoyed reading Driftwood Tides because it was a nice change of pace from what I normally read. Instead of being about young adults dealing with teenage and college problems, this book was about adult problems. Yet, I didn’t feel like this book was very original either. It felt predictable on every level to me, which is always a disappointment. Even though this is an adult book, the problems weren’t that much different. Guilt. Shame. Alcohol abuse. Rejection. Fear. Who am I? Where did I come from? Can I move on? All of those things were touched on in this book. Also different from what I normally read is the fact that this was definitely a Christian book.

I like reading Christian fiction, but honestly, I don’t read more Christian fiction because some of it can be a bit cheesy. Yes, that’s right. I said it. Even being a Christian myself, I can struggle with this in Christian fiction. A lot of times it feels like the authors are trying to teach the reader a lesson versus the character learning a lesson. And often the seemingly miraculous situations that occur feel unrealistic and far-fetched. On top of all that, if a “regular” fiction book can struggle with everything being tied up too nicely in the end, then Christian books even more frequently suffer from this. And so that’s one of the reasons why I don’t read more Christian fiction—the stories don’t always feel real. And unfortunately Driftwood Tides fell into this pattern for me. It wasn’t overly, beat-you-over-the-head with the lesson Gina Holmes was trying to get across, and it wasn’t completely cheesy. But there were aspects of both.

Holton was a character that I struggled with because his first reaction to losing his wife was to turn to alcohol. It happens so frequently in the world, but it just felt so cliché. And I thought this as a conflict was too easy. He’s sober more than I expected throughout the book, but I really thought based off the description that the majority of the book would be about him trying to bond with Libby. Yet that wasn’t exactly the case. Libby was fairly likeable. I enjoyed her being able to see through her fiance’s emotional struggles, but she went through this phase of self-sabotage that annoyed me. Speaking of Libby’s finace, Rob was very familiar to me. I know a few Robs out there, but Rob learned his lessons easier than the “Robs” I know IRL. Tess was probably the most likeable character, but even then it was a bit hard to understand how she had fallen in love with drunk Holton.

-“It’s not fair getting mad at you for being the person I fell in love with.”

-“You’ll like him a lot more if you listen more to his actions than to his words.”

-There were a million things she wished he was mature enough to hear at that moment—that his behavior was threatening to cause what he feared most. She loved him and only him, but she was so afraid that she was going to have spend the rest of her life trying to convince him of something he would never believe…or that his never ending well of neediness would never be filled no matter how many compliments and reassurances she poured into it. One day that neediness might even suck the life out of their marriage, but it didn’t have to be that way. If he could just learn to trust in her, trust in himself and his own lovability, they’d be okay. But those were all things she had already said a million times, in a million different ways, and it always ended with him apologizing, but not really getting it. … She just couldn’t bring herself to repeat it one more time.

”When I love someone God just takes them away.” “I know how that feels. But maybe—I don’t know—maybe it’s not God.”