Rewind to You - Review 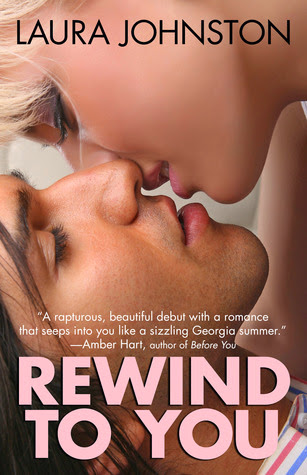 Goodreads description--“A rapturous, beautiful debut with a romance that seeps into you like a sizzling Georgia summer.” —Amber Hart, author of Before You

Wish You Were Here

One last summer before college on beautiful Tybee Island is supposed to help Sienna forget. But how can she? This is where her family spent every summer before everything changed, before the world as she knew it was ripped away.

But the past isn’t easily left behind. Especially when Sienna keeps having episodes that take her back to the night she wants to forget. Even when she meets the mysterious Austin Dobbs, the guy with the intense blue eyes, athlete’s body, and weakness for pralines who scooped her out of trouble when she blacked out on River Street.

When she’s with Austin, Sienna feels a whole new world opening up to her. Austin has secrets, and she has history. But caught between the past and the future, Sienna can still choose what happens now…

Rewind to You started off a little rocky for me. By the time I picked it up, Rewind to You only had a 3.5 overall rating on Goodreads. Now 3.5 isn’t bad, but it isn’t really that great either. So I went into Rewind to You with low expectations. And truthfully, I ALMOST DNF’d it around the 10% mark. The beginning of this story really struggled for me. The way Sienna and Austin meet was very cheesy. Now, let’s not jump to conclusions. I actually like cheesy. But I’ve said before that I have a cheesy line and Rewind to You strutted that line for a good long while in the beginning of this book. Along with that, Austin’s friends' dialogue in the very beginning was full of dialect and slang. And we all know how much this annoys me. So cheesy + slang + an overall sense of writing that needs maturing = me almost putting this one down.

However, I told myself “just 10% more and if you’re still not into it then you can put it down." With only 336 pages, 10% really didn’t take that long to come around. And I looked up and saw 21% instead of 20%. And while 1% isn’t a huge difference, it showed me that I wasn’t watching each and every % go by. And so I said “maybe just 10% more” again and eventually I ended up getting into the story. I mean it really didn’t take me THAT long to get into it, but Rewind to You wasn’t one that instantly pulled me in and refused to let me go.

The description for Rewind to You is a little vague. Essentially here’s the low down (minus spoilers): Sienna’s dad died in a car accident last year. Sienna was driving. And she has recently found herself fainting when the memories of him or that night get too strong. During one such fainting incident she’s rescued by Austin and they begin to develop a relationship. Sienna looks like she comes from rich blood, but the truth is that her family is struggling more financially than they appear. Austin comes from the wrong side of the tracks, but he’s not content to remain there. He has big plans to make something of himself. And what they find is that Austin helps Sienna move on from her tragic night when she lost her dad, and Sienna helps Austin learn what it means to forgive. But things aren’t perfect. Austin’s going to college in Florida and Sienna will be back in Virginia for college come fall. Sienna’s mother wants her to be with someone who can take care of her financially. She knows what it is to struggle and even if she wouldn’t change her own life, she wants more for Sienna. Austin doesn’t fit what she has in mind.

As far as conflict goes, I felt like most of Sienna and Austin’s troubles were easily solved. More than anything, I felt like they needed to get out of their own way. And sometimes conflict like this can just be really annoying. As the reader, you often have more information than the character does, especially in dual narratives. You get the benefit of seeing how each character thinks and feels which allows you to know what the other character is missing. But that can be frustrating when the solution feels so obvious to you and the characters just continue to miss it.

Speaking of dual narrative though…although I felt like the writing needed some finess and maturity in some parts, it is truly difficult to pull off a dual narrative where each character feels distinct and like completely separate entities. But Laura Johnston did this part well. I never once forgot who I was reading from. I never once felt confused about who was speaking. The characters didn’t have any moments that felt like too big of a coincidence—such as thinking the exact same thoughts at or around the exact same time or dreaming the same dreams or anything like that. Laura Johnston knew her characters inside and out. And where other aspects of the writing might need a little growth, this part did not. Kudos.

I often list my favorite quotes in my reviews. I’m going to include some quotes now, but some of these aren’t my favorite. I just want to illustrate all the points I’ve made. Cheesiness. Slang. Parts that need maturing. But also some little gems along the way.

-When life gives you lemons, buy a Mountain Dew. That’s my motto.

-Pralines have never led me astray.

-One glance at his dimpled smile overrides that last thought. I’m afraid if I look at this guy too long, my eyes will be glued forever. Girl falls for mysterious, tall, dark, and handsome stranger on a whim. So not me. Mom would flip out if she could see me now.

-“…all you can do is be the person you oughta be, and let the rest of the pieces fall where they will.”

Rewind to You started out a bit rocky, and it had some flaws. But all in all, I’m glad that I stuck with it and finished it. Laura Johnston has some room to grow as an author, but I see tremendous promise in her debut novel. There was some cheesy and a few other things that bothered me. But I loved the growth of the characters and how they each learned about life and love. Ultimately, I agree with the Goodreads rating. Rewind to You gets 3.5 Stars from me. Have you read Rewind to You? What did you think? Let me know!

Email ThisBlogThis!Share to TwitterShare to FacebookShare to Pinterest
Labels: 3.5 Stars, Contemporary, Laura Johnston, Rewind to You, YA