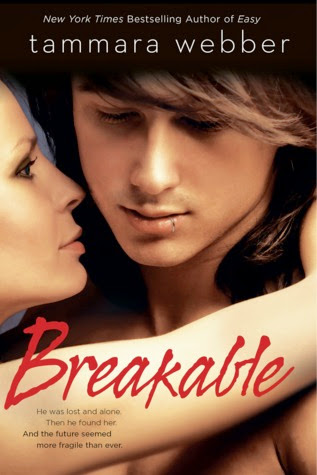 I loved Easy. It’s one of the few books that have gotten 5 Stars from me so far this year. I wasn’t sure after reading Easy if Breakable would be a retelling or something totally different. Having now read Breakable I can tell you that it’s both, but I guess I would essentially classify it as a re-telling. I don’t normally mention this because I usually think it’s stupid to tell you that I might ruin book 1 for you while I’m reviewing book 2, but because Breakable is a retelling but could also be read as a standalone I feel like I should tell you that this review WILL spoil some things from Easy. While Breakable could be read as a standalone, I definitely wouldn’t suggest reading it and then going back and reading Easy. So it’s probably just best that you read these books in the order they were intended.

As I said, Breakable is a re-telling and not at the same time. The book alternates between sections narrated by Landon from after the death of his mother and lead up until he heads off to college and then sections narrated by Lucas that pick up slightly before the events of Easy to the end of Easy. Obviously those of us who have read Easy know that Landon and Lucas are the same person. Yet it’s because the flashbacks take up such a significant portion of Breakable that helps it feel less like a retelling. Landon and Lucas feel like two totally separate people. I suppose that’s kind of the purpose. Landon/Lucas has changed so much over the years that this book covers. The events of his life necessitating growth and changing for the good or for the bad. That being said I didn’t always enjoy reading “Landon” sections.

Obviously, Landon is in a much darker place than Lucas. Landon is the version of himself prior to and immediately following his mother’s death. We know from Easy that he blames himself for not being able to save his mother. And so obviously he’s not in the best headspace during this time period. He skips school, drinks, does drugs, has meaningless sex—though I was impressed with his desire for a deeper relationship--, and does all the typical worldly attempts of numbing his pain. While, I felt the pain this version of Landon/Lucas was going through, I also found that I didn’t like him too entirely much during this phase. I didn’t hate his character or anything like that, but it just felt so far from where I knew he would end up. Typically I’m a huge fan of character growth, and when a character is in such a dark place that they have SO MUCH growing that’s needed, I need the hope that they will grow and overcome. But because I already knew where he would end up, this growing process wasn’t as enjoyable for me as I originally hoped. At the same time, I did enjoy being able to see into his head and the events of his past that shaped him into the man he would become.

Landon is also a HORNBALL! I was both impressed with how real to life this was and annoyed with how frequently his thoughts wandered to sex. Truth be told, Lucas wasn’t much better either. While reading Easy I was so impressed with his need to go slow with their relationship for Jacqueline considering everything she’d been through. He was always willing to stop when she wasn’t ready to move farther. Yet Breakable shows how much more difficult that was for him than he let on in Easy. Again…this is both something I admired with Tammara Webber’s writing choices and found frustrating.

Lucas’s sections were my favorite. I enjoyed both the scenes that we didn’t get to experience in Easy and the scenes being retold from his POV. I was more emotionally invested in the later scenes I suppose. And I did find myself wondering if Tammara Webber was afraid of the reader getting annoyed or bored with the retelling because Lucas’s POV skips over a good bit of dialogue. He summarizes for us, but not really retells in as much detail as I wanted. Pieces I thought I knew without a doubt what Lucas was thinking when reading Easy were more different than I expected, and not always in a good way. One of the biggest things I can think of off the top of my head is why Lucas is participating in the self-defense classes. Maybe it was too much for me to hope that he volunteered of his own will to help women who had been through similar things to what his mother and Jacqueline faced learn to empower and defend themselves. But I was a little let down with why he ended up there. Another letdown for me was that when Lucas goes to Jacqueline’s dorm for the first time to sketch her. In Easy Jacqueline’s email dings and she wonders briefly if Landon (the tutor) is replying to her email. That's not possible, because he's there in the room with her. Lucas asks her if she needs to check her message, and I could only imagine that he would want to know whether she was more interested in being with him in the present or checking her email to see if it’s him as in tutor-Landon. But Breakable doesn’t even mention her email alert at all. I thought that was a huge wasted opportunity.

While I don't remember Easy being too graphic, Breakable definitely felt more heavy on the graphic scale to me. Breakable wasn't TOO graphic (perhaps on my personal scale of 1 to 10—one being nothing and ten being too much—Breakable would get a 5 or 6) and Easy may have been more detailed than I remember (it has been several months since I read that one afterall). Either way Breakable was enough for me to note it as being heavier on this than Easy. Possibly, that’s due to the male perspective.

I also noted that despite Breakable having the easy and smooth, flowing sentences and writing style that I’ve come to expect from Tammara Webber, I liked her writing in Easy better as well. I still enjoyed it but just not as much. My favorite Breakable quotes:

-“I have a proposition, and you’re free to take it or not,” he began. “What I’m about to offer you isn’t a gift. It’s a challenge.”

-Mine, I thought. Yours, her body answered.

-He tried to circle around, as if I was going to let him anywhere near her ever again. I moved with him, facing him, aware of Jacqueline and her exact location. I felt her behind me as if she was part of my body. Flesh of my flesh. Blood of my blood.

Breakable was an easy read. It hooked me, and I read it in a day or two. Comparatively speaking, I enjoyed Easy more all around, but Breakable still gets 4 stars from me. Have you read Breakable? What did you think? Let me know!