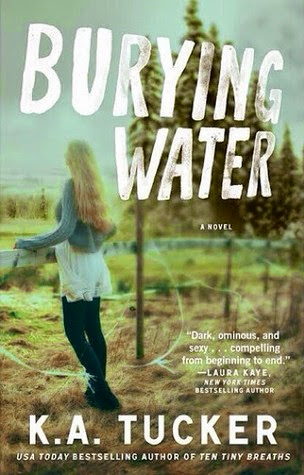 Goodreads description--The top-selling, beloved indie author of Ten Tiny Breaths returns with a new romance about a young woman who loses her memory—and the man who knows that the only way to protect her is to stay away.

Left for dead in the fields of rural Oregon, a young woman defies all odds and survives—but she awakens with no idea who she is, or what happened to her. Refusing to answer to “Jane Doe” for another day, the woman renames herself “Water” for the tiny, hidden marking on her body—the only clue to her past. Taken in by old Ginny Fitzgerald, a crotchety but kind lady living on a nearby horse farm, Water slowly begins building a new life. But as she attempts to piece together the fleeting slivers of her memory, more questions emerge: Who is the next-door neighbor, quietly toiling under the hood of his Barracuda? Why won’t Ginny let him step foot on her property? And why does Water feel she recognizes him?

Twenty-four-year-old Jesse Welles doesn’t know how long it will be before Water gets her memory back. For her sake, Jesse hopes the answer is never. He knows that she’ll stay so much safer—and happier—that way. And that’s why, as hard as it is, he needs to keep his distance. Because getting too close could flood her with realities better left buried.

The trouble is, water always seems to find its way to the surface.

Burying Water is told from two different narrators and in two different time periods. Jesse narrates the past or “then” and Water/Jane/Alex narrates the present. I’ve read other books in the past that were very similar to this. Colleen Hoover’s Ugly Love comes to mind where Miles narrates the past and Tate narrates the present, and I loved that book. But I found myself getting annoyed with the chronological jumps in Burying Water. I had trouble connecting to both time frames, but I specifically found myself disappointed when the narration would swap back to the past. Maybe that was because of the events taking place in the past. Alex is married to a huge jerk, and while I think she needed to find a way out of the situation that she was in, I can’t really condone all of her actions either. I was much more interested in how Water was going to uncover her suppressed memories than I was in seeing them play out in the past.

Yet, even though I had trouble connecting (it wasn’t until about 45% that I got more invested) and the chronological changes bothered me, I don’t know that Burying Water could have been told in any other format that would have been better. I also don’t feel like I can discuss what happened in any depth because that’s the entire mystery of the book. What happened to Water and why? Who caused her injuries? What was so bad that she need to mentally suppress everything from her past? Even though the pacing felt a bit slow to me, the who and the why didn’t take too terribly long to figure out.

Also, I love the fact that the horses kept being renamed the same name with each new horse. My grandparents actually do that with their dogs. They named the first one "Peanut," and then it died. And every dog after that was called "Peanut." It's a running joke with most of the family, but my grandparents are totally serious about it.

The mind, it can be a deceitful thing. But it is no match for the heart.

I’ve found that Burying Water has stuck with me since finishing it, but the process itself wasn’t as thrilling and all-consuming that I’m used to experiencing from KA Tucker. It was still a good story, and I loved that things didn’t really push my comfort level as some of the Ten Tiny Breaths books did. But I’m not sure that I can say I really enjoyed the process of this story either. I’m giving Burying Water 3 stars. Have you read Burying Water? What did you think? Let me know!