All Things Halloween Review - Pretty When She Dies 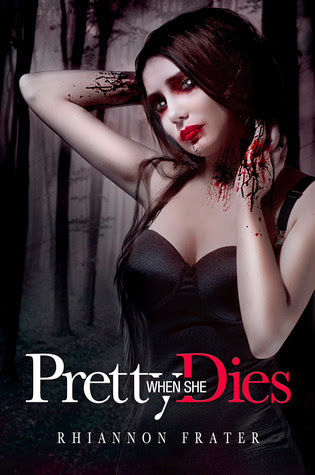 Goodreads description--Amaliya wakes under the forest floor, disoriented, famished and confused. She digs out of the shallow grave and realizes she is hungry...

Sating her great hunger, she discovers that she is now a vampire, the bloodthirsty creature of legend. She has no choice but to flee from her old life and travels across Texas. Her new hunger spurs her to leave a wake of death and blood behind her as she struggles with her new nature.

All the while, her creator is watching. He is ancient, he is powerful, and what's worse is that he's a necromancer. He has the power to force the dead to do his bidding. Amaliya realizes she is but a pawn in a twisted game, and her only hope for survival is to seek out one of her own kind.

But if Amaliya finds another vampire, will it mean her salvation... or her death?

I think it’s possible that I might be in a reading slump. Or well…I think I was in a reading slump at the time I read Pretty When She Dies. Unfortunately. Since I’m scheduled in advance this review won’t go live until quite some time so hopefully I’ll be out of my slump by the time this review is posted. (I did get out of the slump, but I think I'm edging back into one! Sheesh!) Anyway, I think I would have enjoyed Pretty When She Dies more had I been in a different place with my reading life. I was browsing all my titles in my possession, looking for a short book that I would be able to read quickly and I decided on Pretty When She Dies. It being one of only two that I had under 300 pages at the time, I picked it up. Also, I can’t really remember the last time I read a vampire book so I was kind of excited to return to the genre that started it all.

I loved the very beginning of Pretty When She Dies. Amaliya wakes up buried alive and turned into something that she doesn’t know or understand. I loved how disoriented she was. And I was struck with the writing from the very beginning. Her creator watches her rise and feed for the first time. He stays long enough to tell her that he’s going to be watching to see how she handles her new life but that he won’t interfere or help her out at all. The next section was necessary but slow moving for me. Amaliya needed to establish how alone she was in the world, but this section of the book felt like it would drag on forever. Eventually, Amaliya makes her way to Austin where she meets up with Cian, another vampire who happens to have been created by the same vampire as Amaliya. Once she made it to Austin, Pretty When She Dies picked up speed for me, thankfully.

Cian has never really embraced his vampire self. Being forced to turn against his will and losing his wife and two children have damaged him. He’s made a life for himself in Austin, but he’s working so hard to be human—or as human as he can be. Unfortunately, Amaliya brings out the vampire in him like he’s never experienced before. Despite being engaged to a human, Samantha, Cian and Amaliya are drawn to each other. Their connection isn’t easily severed.

But the thing is, Cian and Amaliya’s creator likes to play with his creations. He has all kind of twisted games that they have to endure. Amaliya being his newest creation has just drawn his attention back to Cian. Things get heated, battles are fought, the series must go on. While everything is wrapped up by the end of Pretty When She Dies, Rhianon Frater adds just enough unrest to have need of continuing the series.