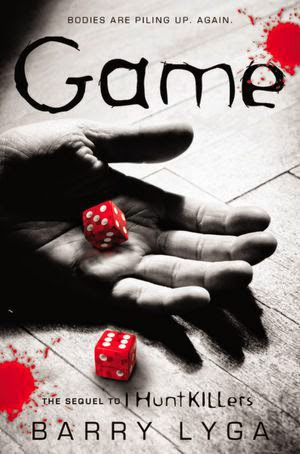 I Hunt Killers introduced the world to Jazz, the son of history’s most infamous serial killer, Billy Dent.

In an effort to prove murder didn’t run in the family, Jazz teamed with the police in the small town of Lobo’s Nod to solve a deadly case. And now, when a determined New York City detective comes knocking on Jazz’s door asking for help, he can’t say no. The Hat-Dog Killer has the Big Apple–and its police force–running scared. So Jazz and his girlfriend, Connie, hop on a plane to the big city and get swept up in a killer’s murderous game.

Game, itself, felt like a much slower book than I Hunt Killers. With coming in over 500 pages, I’m not really surprised that Game felt like a longer and slower book; however, it was more than just length. The pacing really was much slower. And even when I was completely interesting in figuring out what was going on and knowing what was going to happen next, Game still felt like an easy book to put down.

The characters that I fell in love with so much from I Hunt Killers were present: Jasper, Connie, and Howie essentially. But even Billy is such a charismatic character that while knowing he’s utterly evil, I can’t help but enjoy his presence in the book when he’s actually present, in Jasper’s memories of him, and in the running Billy-commentary that Jasper has going on in his head. Jasper’s so real as a character. He still battles wondering if he’s going to snap and turn into his father at any moment. He’s still haunted by his memories, his past, and his potential. Connie is as supportive as ever—maybe even more so in Game than in I Hunt Killers. I don’t remember any sections of I Hunt Killers being narrated by Connie so that was a nice addition to Game. And I loved her faith in Jasper, her love for him, and her willingness to do just about anything for him—even taking on--or possibly leaving--her family. However, Connie had several parts where I wanted to smack her in the head and tell her that she was being reckless and stupid. Howie wasn’t as present as I wanted him to be, yet there were plenty of parts that had me chuckling to myself. Howie brings the humor to this book and this series. He keeps things from getting too intense with his typical teenage boyness and his struggles with his hemophilia.

As far as plot goes, I felt like Game was pretty brilliant. In some aspects, I had certain things figured out WAY in advance, but other things took me a while to piece together. I felt both really smart for figuring some pieces out and really stupid for missing some things that now feel more obvious. I think that might have been exactly the way Barry Lyga planned this book. You don’t want to completely frustrate the reader, but there has to be something they don’t get at the same time because being too predictable is the worst. I highly enjoyed the plot for Game and how it appears to play into the overall plot of the series. Yet as I mentioned earlier, the pacing was a bit slow.

I feel like it’s worth noting because apparently some readers HATE this, but Game ends in like a three-way cliffhanger. The reader is uncertain of every single character and what’s going to happen next with our favorite ones. But I’ve already started Blood of My Blood and it picks up immediately where Game leaves off so no worries there. I would just suggest perhaps making sure you have Blood of My Blood available to dive right in as soon as you finish Game.

-“…I never met Mrs. Dent, but I know she must have been a good person because I’m pretty sure Billy Dent didn’t raise Jasper to rescue helpless hemophiliacs from bullies.”

-“Ever since I’ve known you, you’ve been thinkin’ that someday you’re gonna crack and end up like your daddy. And you’ve been looking for proof that you won’t. What you don’t realize is this: The lookin’ is the proof.”

-He figured he cut a pretty dashing figure in his jeans and heavy shirt. And gloves. And hat. Not like a page out of a catalog or anything, but it showed how he thought ahead. He was prepared. Women dug guys who were prepared.

-“Howie, you’re the same age as my nephew.”
”Actually, I’m six weeks older.”
She shook her head. “It’s not going to happen.”
”You say that now.”
”I do.”
”We’re both two lonely people,” Howie said seductively, “trapped in a world created by Billy Dent.”
Samantha howled with laughter. Howie figured that wasn’t a good sign.

-“Dude! You hit on my aunt!”
”That depends on how you define ‘hit on.’”
”You totally hit on my aunt.”
”Was that wrong? Was I not supposed to do that?”
”You should think about what you just said. Think about it, Howie.”
”I’m just not seeing where I went wrong. For an older woman, she’s got a nice body, and she must moisturize like a mofo because her skin is—“

-“Watch it. That’s the mother of my illegitimate children you’re talking about.”

Also, I feel like it should be noted that I normally hate dialect, but I rarely even noticed it in either I Hunt Killers or Game. As a matter of fact, Barry Lyga did dialogue so well that I actually enjoyed it. It wasn’t always present. It wasn’t over the top. And I don’t know any other writer who could use “they’d’ve” and get away with it. But Mr. Lyga pulled it off.

Despite the pacing, I feel like Game has the makings of a brilliant book in a brilliant series. Even though I feel certain Game will probably be my least favorite in the series, Game gets 4 Stars from me easily. I can’t wait to see how things wrap up with Blood of My Blood. Have you read Game? What did you think? Let me know!