All Things Halloween Review - Strange and Ever After 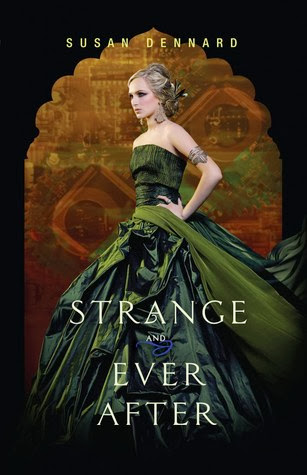 Goodreads description--In the conclusion to the trilogy that Publishers Weekly called “a roaring—and addictive—gothic world,” Eleanor Fitt must control her growing power, face her feelings for Daniel, and confront the evil necromancer Marcus...all before it’s too late.

He took her brother, he took her mother, and now, Marcus has taken her good friend Jie. With more determination than ever to bring this sinister man to justice, Eleanor heads to the hot desert streets of nineteenth-century Egypt in hopes of ending this nightmare. But in addition to her increasingly tense relationships with Daniel, Joseph, and her demon, Oliver, Eleanor must also deal with her former friend, Allison, who has curiously entangled herself in Eleanor’s mission.

With the rising dead chomping at her every move and Jie’s life hanging in the balance, Eleanor is convinced that her black magic will see her through to the bitter end. But there will be a price. Though she and the Spirit Hunters have weathered every battle thus far, there will be consequences to suffer this time—the effects of which will be irreversible. And when it’s over, only some will be able to live a strange and ever after.

Susan Dennard will leave readers breathless and forever changed in the concluding pages of this riveting ride.

*Sigh* I hate when someone I like and respect loves a book or a series, and I find that I just don’t connect with it for whatever reason. That seems like it’s been happening to me more frequently. Maybe I’m more exposed to book friends than ever before. Maybe it’s because of a starred rating system and just discussing books with my friends before blogging didn’t involve giving a book a rating. And maybe it’s because my tastes are changing. For whatever reason I just hate when it happens. I also hate when I love a book that one of my reading friends doesn’t. But as much as it sucks. It happens. I didn’t hate this series, but I didn’t love it either. And I find myself feeling relieved that it’s over.

I think the biggest reason why I struggled with this book was because I had a hard time connecting to the characters. Jie jumped to conclusions about Eleanor and her bond with Oliver simply because Oliver is a demon. Allison was never really likable in the past, even if she was making an effort now. Joseph was just as bad as Jie about his assumptions and prejudice against magic and Eleanor’s use of it. Daniel, Eleanor, and Oliver were each so all over the place all the time that I wasn’t ever sure what to expect from any of them. Eleanor & Daniel fight like no one’s business. They make assumptions. They judge each other. They both snap and pop off. And Eleanor and Oliver are the same way. Eleanor herself would be up one minute and down the next. And it wasn’t always a result of her use of magic that affected her like that.

And so yeah, maybe that’s a better explanation. I didn’t feel like anything was consistent. One minute Joseph was saying Eleanor’s use of magic was evil and the next minute he’s nodding his approval.

I find that it’s extremely rare for me to jump ship on who I want the main character to end up with. This process was such a slow transformation for me throughout the series that I almost didn’t notice it was happening until I was an out and out turncoat. But I saw the pieces of this part of the story coming from a mile away at the same time. Strange and Ever After ended the Something Strange and Deadly series in exactly the way I would have hoped for it to end. But I still didn’t find myself connected.

Here…I’ll give you some examples of the places I was huffing and puffing in frustration or show what I’m talking about:

-”You are as volatile as Daniel is.” “Temperamental, perhaps,” Oliver admitted, swinging his gaze to me. “But only when you have earned it. Daniel is cruel whenever his feelings are hurt.”

-”Use me, Eleanor.” Oliver leaned toward me. “Betray me so that for that brief moment while my magic keeps you warm, you can pretend your life is not broken. Why, I bet if you try hard enough, you could even pretend your mother is still alive.” His words crashed into me. I rocked back on my heels, and all my guilt for mistreating him vanished. “Heal me,” I said. “Heal my woulds now, Oliver. Sum veritas.” …”You will push everyone away,” he growled beneath his breath. “Just like he did, you will lose us all.” … I stepped toward him. “I am not Elijah.” “Yet you are becoming him.”

-The further I sank into it, the less I had to feel. The less I had to think. Yet I could not seem to make the heady contentment come. It wasn’t muffling my troubles as it usually did. The magic was fading too fast—so quickly, in fact, that I feared there was a hole in my chest through which it leaked.

-”You cannot stay with us, Allison. You must return to Philadelphia. There’s no place for you here.” “No place for me here,” she said sharply. “Of course there isn’t. You are Eleanor Fitt. You do not want me now, just as you never wanted my company before.”

Eleanor who refuses to answer to the name “Miss Fitt” has told someone else that she doesn’t belong.

-It isn’t your fault, I told myself. It is Oliver who pushes your friends away.

-Perhaps Oliver was right: perhaps I did push my friends away—but it was not only me. They pushed back. From all directions, everyone wanted something from me. Oliver wanted his freedom, Allison wanted companionship, and Daniel wanted my heart. Jospeh was the only person on this ship who seemed to understand that all that mattered right now was Jie and Marcus. But even Joseph wanted me to stay away from necromancy—even Joseph made stupid demands regarding friendship and power that I could not meet. … But at least with no one telling me what to do, I would be left with the lone person who could kill Marcus and get this job done. Me.

-”My loss is part of me, El. I cope with it as best I can. But you?” His gaze roamed over my face. “You fight to keep what you cannot have back.”

-”It amazes me how easily you forget all the darkness surrounding you, El. How blind you are to your own corruption.”

-”Remember this, El: not everyone who you invite in will wish to be there.”

For one reason or other, the only character I really ended up liking was Oliver and even that was tenuous.

Email ThisBlogThis!Share to TwitterShare to FacebookShare to Pinterest
Labels: "All Things Halloween", 3 Stars, HistoricalFiction, Horror, Paranormal, Science Fiction, Something Strange and Deadly, steampunk, Strange and Ever After, YA, Young Adult, Zombie