All Things Halloween Review - Blood of My Blood 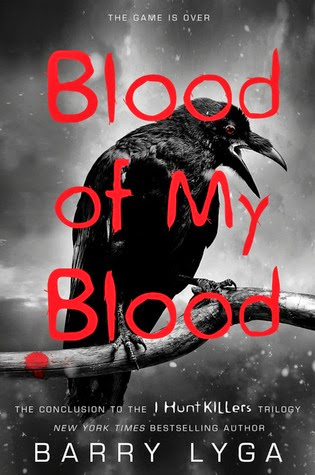 Goodreads description--Jazz Dent has been shot and left to die in New York City. His girlfriend Connie is in the clutches of Jazz's serial killer father, Billy. And his best friend Howie is bleeding to death on the floor of Jazz's own home in tiny Lobo's Nod. Somehow, these three must rise above the horrors their lives have become and find a way to come together in pursuit of Billy. But then Jazz crosses a line he's never crossed before, and soon the entire country is wondering: "Like father, like son?" Who is the true monster?

The chase is on, and beyond Billy there lurks something much, much worse. Prepare to meet...the Crow King.

In my review of Game (Jasper Dent, # 2), I said that since Game ends in a 3-way cliffhanger I would suggest having Blood of My Blood ready for you to pick up immediately upon finishing Game, but I’ve decided that I want to recant that statement. At this point, I suggest giving yourself a day or two to digest and rest before picking up Blood of My Blood. And I say that because Blood of My Blood is action-packed from start to finish in an great but exhausting way. Blood of My Blood does pick up exactly where Game left off, but so much happens in this book that you might just need a few days to gather yourself before really stepping in the brilliant madness that is Blood of My Blood.

Discussing briefly where Game ended, Jazz has been shot and left for dead by Hat in the storage unit. Connie has been captured by Billy. And Howie pulled a gun on Jasper’s aunt, Samantha, which backfired on him and he was knocked unconscious. It’s almost difficult for me to even discuss those things like that’s where Blood of My Blood began because it feels like six books ago that all of that happened compared to where things ended. I will say that if you felt sorry for Jasper, for his upbringing, for what he’s witnessed, for what he’s experienced, and for what he’s terrified of becoming…up until now…well you have no idea. There is so much I want to say, but all I’ll allow myself to say is that Jasper’s upbringing, his experiences, what he’s been through is so much more evil and twisted and wicked than I even imagined—and growing up witnessing torture and murder over and over again is pretty hard to imagine.

Where I Hunt Killers and Game had frequent appearances of the secondary characters, Blood of My Blood is so much more heavily focused on Jasper, Billy, and Jasper’s mom (who we found out in Game is still alive). The side characters, Connie, Howie, G. William, and Hughes make repeated appearances and even narrate occasionally, but nothing like the previous two books. I missed them, but Blood of My Blood is about Jasper and his family unit above all else. Jasper knows that he’s the only one who can stop his father, because it’s taken the police 20 years and they still haven’t captured Billy Dent, but also because Jasper knows how Billy thinks. And Billy wants Jasper to find him.

I will say that Jasper fits into that category of heroes that have literally been beaten to a pulp, put through the wringer and yet continues to press on above and beyond all natural possibilities. Jasper shouldn’t have been able to stand after everything he’d been through. All of that was a stretch on reality, but the body is capable of extremes beyond what we can imagine when put to the test.

-“…I’m the only one who can do what needs to be done.” What needs to be done. Five simple words. Monosyllables. Nothing exceptional or special about them. But when Jazz strung them together, polychromatic spatters erupted behind Connie’s closed eyelids. “You can’t kill him.” She hated herself for saying it. Days ago, before she’d ever met the man, she had fantasized Billy Dent’s death. She lusted for it even more deeply now. But not at the expense of Jazz.

-“…The cops will come to you eventually. It’s better if you can’t tell them anything.” “I wouldn’t squeal on you.” Howie pouted, even though Jazz couldn’t see him. “Yes, you would.” “I totally would,” Howie admitted. “I’m weak. I lack character, Jazz. That’s my problem. That’s always been my problem. I blame my mother. For coddling me.” He thought for a second. “And I guess for carrying the hemophilia gene in the first place, too.”

-“You’ve fulfilled your service. Your utility is at an end. Pawns are always sacrificed before the game’s end. When we next meet, you will witness your last vista, hear your last cry, weep your last tears. You will take your last breath.”…”When you die, […], it will be ugly. I promise you that. And I also promise you that I will be a little sad at that moment. But only a little bit.”

-It was like playing checkers, only to learn that your opponent was playing chess all along.

-What happens to the sidekick when the good guys goes off the rails?

-”There isn’t enough space on your body for the tattoos, man.” Jazz shook his head. “We’re not trading here. This isn’t I do something for you, you do something for me. This is hard-core friendship. Varsity level. This is me asking you to do something for me without getting anything in return. This is friendship, Howie.” … “You just have to ask yourself, Howie: Do you need to be repaid or not?” Every piece of him cried out to say yes, to demand that in return for what he had done and would do that Jazz give up now and live.

Blood of My Blood and the entire Jasper Dent series is brilliant. It’s madness. It’s heartbreaking. It’s stomach churning. It’s not for the faint at heart. And it’s not for those who like happy little books, with pretty little endings. Now, I’m not commenting on the ending at all. Just know that overall, this book and this series has exceeded my expectations in every way. Blood of My Blood gets 5 Stars from me. Have you read Blood of My Blood? What did you think? Let me know!