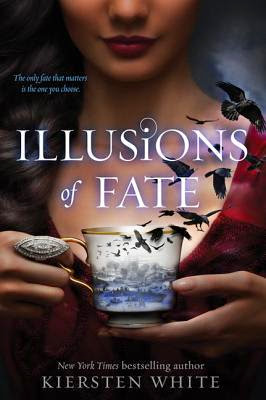 I went into Illusions of Fate with relatively low expectations. I don’t really have a reason why I had low expectations, but I just wasn’t expecting much from this book. Illusions of Fate is my first Kiersten White read even though I’ve owned Paranormalcy for quite some time. First let me say that having read this book, I think the cover is so fitting. The tea cup and the black birds. Plus I like the fact that the cover model is shadowed. In Illusions of Fate Jessamin is described as being darker skinned than most of the people around her because she comes from a different country (an island country), but I wasn’t sure how dark skinned Jessamin is. So just having the cover model shadowed a bit gave me the same kind of impression as the book did.

Jessamin as a character was pretty relatable. She’s from Melei which is an island known by the Albien’s as being fairly primitive. So she’s looked down upon by her peers. She came to Albien as a student. And her classmates don’t associate with her because she’s looked upon as being less. She works in a hotel kitchen run by her cousin so the guests look down upon her too. But she catches the eye of a nobleman, Finn, and he sees past her social class and race. Unfortunately because Finn has notice Jessamin, so has Finn’s enemies. Finn himself was easy to get caught up in. Although, I had a hard time picturing him as being only nineteen years old. He describes himself as the “oldest nineteen-year-old alive.” Yet I still had a hard time reconciling nineteen with his character. I think even his early twenties would have made more sense. He felt older, and since his age only came into play when Jessamin asked him how old he was, this could have been a detail easily changed.

Jessamin and Finn’s relationship built slowly. They had an initial attraction and maybe Finn’s shadow self was a bit hasty, but it took longer for Jessamin to come around. In this aspect, she felt a little dense considering how clever she’s repeatedly described to be. I worried for a bit if we’d have to deal with a love triangle, but that was never really a problem.

My only real problem with Illusions of Fate centered around the ending. It wasn’t that it was a bad ending, but it felt a bit rushed. Some of the facts that came out toward the end of the book had me wondering if Illusions of Fate was going to turn into a series. I thought there would be no way to wrap up all of the loose ends with the amount of time left. Eventually I discovered that all of the ends were tied, but I would say most of them were hastily tied. And the resolution felt too easy. It didn’t bother me too much, but I would have been okay with a little more length added to this book in order to make the ending a bit more solid.

-What nonsense is my heart pattering out?

-It makes a soul lonely when even your tongue has no home.

-“I have had a series of misfortunes since we met…”

-In place of comforting news about my marriageability and future grandchildren, please know I have adopted a bird.

-I’ve been making choices, but I haven’t been deliberate or thoughtful about them.

-“You forgot ‘dashingly handsome.’ Dear friend is nice but hardly covers the extent of my qualities.” Eleanor looks up from her own letter writing. “How did she describe me? Because I have always preferred my eyes to be referred to as the ‘color of a storm-tossed sea.’ If either of you were wondering.” “You did not fare much better. In fact, I think I am ahead. I am a ’dear friend,’ and you are merely ‘recently ill.’”

And though not part of the actual book itself, Kiersten White says in the Acknowledgements “First, always, thanks go to Noah. My shadow may stay put, but my heart couldn’t help but jump to you.” I just love reading acknowledgements. Does anyone else read those besides me?

My first Kiesten White experience went off better than I expected. I wanted to know more by the end of the first chapter and was officially hooked by about the 30% mark. Even though the ending was slightly too quickly and too easily resolved, I enjoyed this experience. And I’m giving Illusions of Fate 4 Stars. Have you read Illusions of Fate? What did you think? Let me know!