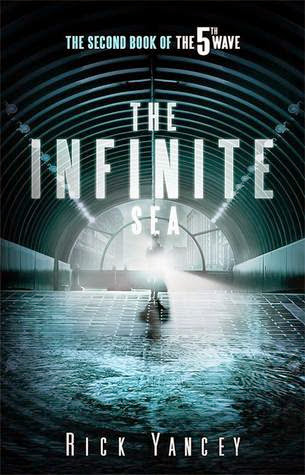 *Deep sigh*. Oh my. That was a roller coaster. The Infinite Sea felt like a George R R Martin novel because absolutely nothing good happens to these characters. That’s not me spoiling this book. That’s me trying to prepare you for this ride because just when things are looking up…….WHAM! Not so much. Even though The Infinite Sea was an exhausting book, it still was a great second installment to The 5th Wave series.

We pick up The Infinite Sea a little while after The 5th Wave ended. I don’t remember how much time actually passed, maybe two weeks, but regardless, I didn’t feel out of the loop or like too much happened between the end of the first book and the beginning of this one. Like The 5th Wave, Rick Yancey writes from multiple POVs. The largest portions were Cassie, Ringer, Evan, Ben/Zombie, and then Poundcake had a few short sections similar to the sections Sam had in the first installment. I really enjoyed Ringer’s sections even though I wasn’t excited about reading from her POV at first. And even Poundcake’s short little sections added to the depth of the entire story.

When we start The Infinite Sea, Ringer has been tasked with the job of scouting ahead. The group has plans to travel to a more permanent hiding place for the winter because the hotel they’re staying now just isn’t far enough from Camp Haven where everything went down at the end of The 5th Wave. The hotel was supposed to be Evan and Cassie’s rendezvous location, but Evan has yet to show up. Zombie/Ben is ready to move on assuming that Evan is dead, but Cassie isn’t ready to give up yet. Thus Ringer has been sent out to scout out these caves as a potential winter shelter. Without giving too much away, Ringer finds herself back in the hands of the enemy, and eventually Evan finds his way to Cassie. But life isn’t blue skies and rainbows for any of these characters. More terrible things continue to happen as the enemy closes in around them.

Anyone who wasn’t digging the Cassie/Evan relationship from The 5th Wave can relax because their relationship is not the focus of this book. But don’t relax too much because there still is a relationship to be had. I personally love Cassie and Evan. I see no difference between them and Wanderer and what’s-his-face from The Host. And they’re probably less creepy than Katie and Daemon from The Lux series. At least Evan’s DNA is human. Anyway…loved them as individual characters and loved them together. Cassie surprises me sometimes with her temper. She isn’t as timid as you might think. And that spark inside her is what drew Evan to her to begin with. When everyone else would have hid, Cassie stood up to fight. Evan’s fighting his nature at every step. Or maybe he’s actually following his nature, depending on how you look at it. But it’s a battle nonetheless, and one he doesn’t always understand. He has Cassie set at # 1 for every single turn. Everything, for him, always comes back to her. And I love that.

I was hoping for a Zombie/Ringer hook up, but that didn’t really happen since Ringer is not even with the group through 99% of the book. Remember from The 5th Wave that Ringer shot Ben so he’s injured now. That being the case, he is not at the top of his game throughout The Infinite Sea, but even still, Zombie is not a character to mess with. Speaking of Ringer, as what typically happens with me…now that I was allowed a glimpse inside her head she became a much more likeable character. She, like the others, is just trying to cope in a very broken world, and she’s trying to survive. She easily has the toughest road out of all the characters in this book, and I liked her more and more the further along things went.

Enter a new character…everyone say hi to Razor. *Waves* I wasn’t sure, at all, what to think about him. He’s charged to essentially take care of Ringer while she’s in the enemy’s clutches and you can see him transform from stoic soldier, to confused pawn, to potential help, to more, and back again. It’s a process that truly kept me guessing. And I should have seen some events surrounding him coming but I just didn’t. He surprised me through and through.

As with The 5th Wave, I just really enjoyed Rick Yancey’s writing. He’s smooth, free-flowing, and poetic. Here are some of my favorite quotes:

-Five men and two women, strangers to one another on the eve of that final growing season, now bound by the unspoken promise that the least of them was greater than the sum of all of them.

-Promises are the only currency left. They must be spent wisely.

-“What’s the first priority?”
”No bad thoughts,” she answers dutifully.
”Because bad thoughts do what?”
”Make us soft.”
”And what happens if we go soft?”
”We die.”
”And do we want to die?”
She shakes her head. “Not yet.”

-“One day, Private Ringer, you’re going to smile at something I say and the world will break in half.”
”I’m not prepared to take on that responsibility.”

-When you look death in the eye and death blinks first, nothing seems impossible.

-Promises are priceless, and a kiss is a kind of promise, too.

-I’ll find you, Cassie. Don’t I always find you?

-You never know when the truth will come home. You can’t choose the time. The time chooses you.

-“Who is Cassiopea?” … “The one who stood up when anyone else would have stayed down”…

-He’s violated more than my memories. He’s molesting my soul.

-My reaction is months in the making. And instantaneous.

-Lies within lies within lies. Feints and counterfeints. Like a desert mirage, no matter how hard you ran toward it, it stayed forever in the distance. Finding the truth was like chasing the horizon.