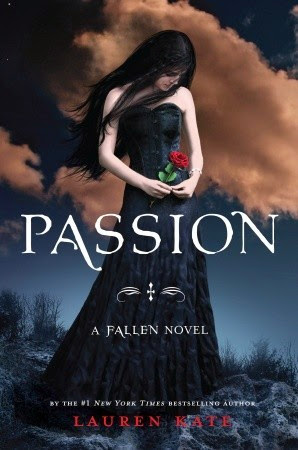 Source: Borrowed the paperback from friend, Paula (Thanks PB!)

Goodreads description--Luce would die for Daniel.

And she has. Over and over again. Throughout time, Luce and Daniel have found each other, only to be painfully torn apart: Luce dead, Daniel left broken and alone. But perhaps it doesn't need to be that way....

Luce is certain that something - or someone - in a past life can help her in her present one. So she begins the most important journey of this lifetime...going back eternities to witness firsthand her romances with Daniel...and finally unlock the key to making their love last.

Cam and the legions of angels and Outcasts are desperate to catch Luce, but none are as frantic as Daniel. He chases Luce through their shared pasts, terrified of what might happen if she rewrites history. Because their romance for the ages could go up in flames...forever.

Sweeping across centuries, PASSION is the third novel in the unforgettably epic FALLEN series.

I borrowed Passion from my friend Paula somewhere around 2 years ago! (More like 3 at the time of this posting.) WHOOPS! Super bad friend, I know. My bad. I was torn between wanting to finish this series and knowing that I wasn’t excited about this book in particular. I initially liked the idea of two people (okay one person and one semi-fallen angel) being soul mates, continually being reincarnated (or the human continually being reincarnated), and finding each other lifetime after lifetime; however, a couple of things have made this subject not as appealing as it once was. 1) Being a Christian sometimes I find it annoying that angels in fiction never seem to behave in reverence to God as I believe they would in real life. Obviously there are true fallen angels in real life, yet that is the difference between angels and demons. And my point being that there for a while it seemed like every “angel book” I read seemed a bit too rebellious and too far fiction for me. 2) YA Paranormal books where something supernatural brings the characters together yet the characters can still choose to fight their supernatural connection began to abound—at least in my own reading. Like the too far fiction of angels vs. demons, I began to question what the point was of having a supernatural connection to another being if those characters weren’t going to end up together. 3) I really hate time travel books. I’m really not 100% sure WHY I hate time travel books, but I’ve yet to read one where I didn’t find it annoying. So all of that sums up how I felt about starting Passion and why I put it off for so long.

Because it’s been so long since I read Torment, starting Passion left me a bit confused. I’m sure I still missed some connections between the previous books and this one, but that’s okay. I got the gist of the story. Truthfully on top of my other hang ups I’ve already discussed, Luce was beginning to get on my nerves with how much she was questioning Daniel and their relationship. Granted, Daniel was never really a fountain of information for Luce and often left her with more questions than answers in the past. But when you’ve lived thousands of years constantly being reincarnated and continually falling in love with the same person over and over again, how do you question that deep down. And also truthfully I skimmed a lot of Luce’s narrations. However, the further I got into the book and the more Luce learned about her past lives with Daniel, the more willing I was to dig in a little deeper instead of just skimming the surface. Luce learns some critical things about her love for Daniel and about his love for her, but it sure seemed like it took her a long time to learn them.

Daniel, on the other hand, I was more able to connect with. I can’t remember if he’s ever really had a narration separate from Luce in the previous books, but I felt like I was able to see him as a character much better through Passion than Luce. I will say that I liked the contrast between Daniel and Luce. Whereas Daniel’s love has continued to grow for Luce throughout each incarnation, Luce’s love for Daniel has had to begin anew each time. Daniel has all the information of lifetime’s past, but Luce is essentially a blank slate. Luce wants Daniel to share his information with her so bad, yet Daniel knows that doing so in the past has essentially caused her death and he wants to get as much time with her in this lifetime as possible.

I pushed myself to continue to read this one when I might have otherwise put it down because I wanted this officially read, marked off my list, and given back to Paula. That being said, if I needed to put this one down more frequently it probably would have resulted in a lower rating. Each incarnation that Luce or Daniel traveled back to was a bit of the same thing over and over. “Oh no, you’re dressed for the wrong time period. Must find you some proper clothes.” “Oh look, there’s your former self.” Watch from a distance or meld into your former self to experience everything first hand. “Oh look, there’s Daniel’s former self.” Make out. “Whoops, you died….again.”

Passion was better than I expected it to be. It wasn’t as bad in all of the areas as I expected. Lauren Kate’s angels and demons, even Lucifer, appear to have a reverence for God or at the very least, there seems to be certain underlying rules that were more true to life than many other YA paranormal fiction I’ve read in the past. Luce and Daniel remain true to their love for each other in every reincarnation which makes their supernatural curse bond serve a purpose. And while Luce’s travels to the past were a bit of an annoyance to me, I’m glad she was able to learn the lessons she needed to learn. Daniel’s trips back were a bit less frustrating in general.

Passion gets 3 Stars from me. I can’t say I loved this book, but it was more bearable than I was expecting it to be. And finally I can cross this one off my list and move on to the series ender, Rapture. Have you read Passion? What did you think? Let me know! *Side note, I really like all the covers for this series, minus this one. I’m not sure if it’s the girl herself or the way the cover was done, but she looks a bit fake in this picture. Anyone else see what I’m seeing?