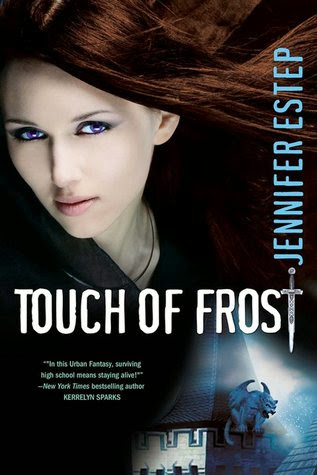 Goodreads description--My name is Gwen Frost, and I go to Mythos Academy; a school of myths, magic and warrior whiz kids, where even the lowliest geek knows how to chop off somebody's head with a sword and Logan Quinn, the hottest Spartan guy in school, also happens to be the deadliest. But lately, things have been weird, even for Mythos. First, mean girl Jasmine Ashton was murdered in the Library of Antiquities. Then, someone stole the Bowl of Tears, a magical artifact that can be used to bring about the second Chaos War. You know, death, destruction and lots of other bad, bad things. Freaky stuff like this goes on all the time at Mythos, but I'm determined to find out who killed Jasmine and why; especially since I should have been the one who died...

I’m not sure that I have much to say about Touch of Frost. This was a fairly easy read for me to get through. I liked the different take on the supernatural/mythology with this story being centered around an academy to Amazons, Valkyries, Spartans, Vikings, etc. learning how to battle against Reapers and others in an epic battle spanning the ages. I don’t often read about modern day Spartans or Vikings so I appreciated the new (to me) approach to paranormal/fantasy YA.

Gwen was an okay character in the beginning. She’s new to Mythos, and she’s different from all the other students in that she’s a Gypsy and she’s the only Gypsy at Mythos. During the teenage years there’s just about nothing worse to a kid than being different. And Gwen is no exception. She feels like an outcast, but just as much as she blames that on the other kids, it’s her fault as well. Gwen doesn’t seem to have made much of an effort to make friends up until this point. Granted, her mother only passed away six months ago, so we’ll give her a pass for being depressed and antisocial. It was nice to see Gwen branch out and grow over the book, and I’m looking forward to seeing how much more she changes over the coming books. The slow changes she makes in thinking, action, and relationships was enjoyable and realistic.

Because Gwen feels like an outcast in the school, she looks at the other students very negatively. It’s warranted in some cases and in some cases not. Jennifer Estep writes an overly clichéd group of mean girls that are even mean to each other. As a matter of fact there was much of Touch of Frost that felt clichéd to me when it came to plot and characters despite the unique overall concept of descendant-warriors of these ancient groups of people. None of the twists were really a surprise for me, and I felt like the social aspects of Mythos were so stereotypical that I found myself rolling my eyes a good bit.

All of that said, I felt like Touch of Frost was still a decent first installment to a series that I see some real potential in enjoying. Logan, of course, is a hottie even if he behaved stereotypical as well. Touch of Frost gets 3.5 Stars from me. Have you read Touch of Frost? What did you think? Let me know!