All Things Halloween Review - Dreams of Gods and Monsters 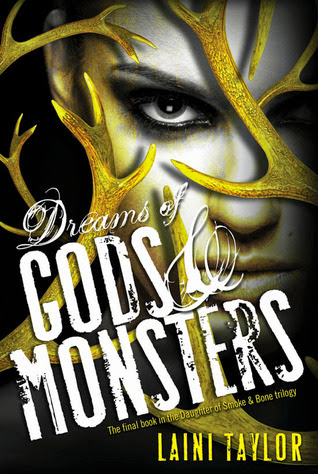 I felt like I missed a good bit of Days of Blood and Starlight while I was listening to it on audio. And so in an attempt to prevent that from happening with Dreams of Gods and Monsters I did two things: 1) I took notes. 2) I progressed slowly and only listened when I felt like I could really pay attention. And I still came out of Dreams of Gods and Monsters feeling a little like I missed some important parts, but not nearly to the level of Days of Blood and Starlight. I say all this to say that this is a complicated series, and while I would definitely recommend this series to lovers of fantasy, I would not really recommend the audio version. Khristine Vham does a great job with the narration. I applaud her pronunciation, and I even like the voices that she does for the characters, specifically Zuzana. It's just that there is a lot to absorb, and I think it's probably better done through actually reading it.

As I said, there's a lot that happens in this book, and it's one of the more complicated stories with pieces coming in from all angles. Coming in at 613 pages, Dreams of Gods and Monsters has a lot to wrap up and bring together. I dealt with frustrations in the beginning with story lines that felt like they didn't have anything to do with what's happened so far. And that's true to some extent, but mostly they were there to pull everything together for the ending. But it took quite a while for the events to begin to make sense. And most of the time, I just wanted to get back to Karou and Akiva.

Karou is one of those characters that has it all. She experiences almost every emotion you can think of throughout this book and especially over the entire course of the series. Zuzana is still one of my favorite best friend characters, and probably one of my favorite characters period. She brings the humor and I heart her. Akiva...poor Akiva. He's been through so much and Dreams of Gods and Monsters doesn't really give him a break either. Ziri shines in the parts that are focused on him. I was fearful of his affection towards Karou, but I didn’t have to worry. Liraz softens as a character throughout Dreams of Gods and Monsters, and I’m so glad because she was a throwaway character for me before.

*Having not actually read this book, I didn't see the spelling for each character's name and may have misspelled some above. If you notice any misspellings, please let me know in the comments. Thanks!