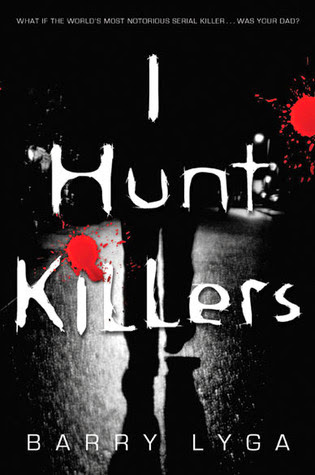 Goodreads description--What if the world's worst serial killer...was your dad?

Jasper "Jazz" Dent is a likable teenager. A charmer, one might say.

But he's also the son of the world's most infamous serial killer, and for Dear Old Dad, Take Your Son to Work Day was year-round. Jazz has witnessed crime scenes the way cops wish they could—from the criminal's point of view.

And now bodies are piling up in Lobo's Nod.

In an effort to clear his name, Jazz joins the police in a hunt for a new serial killer. But Jazz has a secret—could he be more like his father than anyone knows?

Fans of Dexter...I Hunt Killers is the book for you. Husband and I haven’t quite finished watching Dexter (at the time of writing this review, by the time this review goes live we will have finished it), but we’re about a season and a half out from finishing. Because we’re in the middle of the show, I couldn’t help but spot similarities of I Hunt Killers with Dexter. While Dexter’s father wasn’t a serial killer but a cop, he still taught Dexter how to evade getting caught. Jasper’s father was also teaching his son how to be a killer and how not to get caught. But while Dexter’s father taught him how to evade capture by thinking how the cops think, Jasper’s father did it by taking him along on his kills. From the way Jasper remembers it, his father seems to have turned every situation into a teaching experience. And so even though Billy Dent isn’t a model father, he had the teaching part down pat.

Because Jazz knows how a serial killer thinks, it was easy for him to spot how a recent murder in his small town of Lobo’s Nod fit the bill for a serial killer and that there would in fact be more murders. Local sheriff, G. William, has taken a personal interest in Jazz’s life. Despite that, G. William finds it difficult to believe Jazz’s serial killer theory. This causes Jazz to branch out and do his own investigation. Eventually G. William sees Jazz’s point of view and enlists Jasper’s particular knowledge of his father’s murders to help solve the case.

More than the story itself, I Hunt Killers is character driven. Jasper is understandably affected by everything he experienced and witnessed at the hands of his father. He’s paranoid about what the town thinks of him which is also understandable. Anyone would fear being thought of as a killer when their father turned out to be one of the world’s worst and taught you everything you know at the same time. Jasper subconsciously seeks to find the killer in this instance in hopes of proving his own innocence. Jasper’s character was so psychologically well-thought out by Barry Lyga. Every action he takes, every thought he has serves a psychological purpose. Jazz is a complex and brilliant character.

But Jazz would be nothing without his sidekicks. His best friend, Howie, is a hoot. Howie is a Type A Hemophiliac. This is a genetic deficiency involving the blood’s clotting factor which increases bleeding. Because of this, Howie is well…fragile. He’s prone to injury, and normal injuries can prove to be much more serious for him than most. Howie is Jazz’s go-to partner for any illegal investigating and such. Howie always has Jazz’s back and they’ve been friends since before everyone found out about Jasper’s father. Howie stuck by Jazz during the transformation period from popular to pariah. Howie was a great character and an awesome best friend. Plus he actually caused me to laugh out loud at one point which is always a bonus for me.

We can’t forget about Connie—Jazz’s girlfriend. Connie and Jazz form a bi-racial couple, and I loved the added tidbit that Connie’s father wasn’t happy about the pair. Connie wasn’t as supportive of Jazz’s extracurricular investigations, but I didn’t mind that because she came from a place of being genuinely concerned about Jazz. Connie has Jazz’s best interest at heart. She wants him to be safe. There was a period when Jazz talks about Connie being a “safe” choice for him to date. I went through a period of time wondering if the fact that Connie was a “safe” choice meant that Jasper didn’t really have true feelings for her, but that wasn’t the case at all. All in all, I loved Jasper and Connie’s relationship. Have no fear though, this relationship, while present, doesn’t overtake or overshadow the story at all.

I’m not sure that there were any too big surprises or plot twists. There was one thing that I didn’t predict, but I wasn’t blown away or shocked by it as I might have been. Yet, I Hunt Killers leaned towards being one of those books where I didn’t feel the desire to figure everything out because the process of experiencing this book was just so stinking enjoyable.

I Hunt Killers is just about as well done as a book can be. It’s YA so there’s nothing too graphic. There is mention of some intense subjects considering we’re talking serial killers here and serial killers don’t really have personal boundaries. There’s a little bit of romance, a little bit of mystery, a little bit of humor, and a lot of psychology. I thoroughly enjoyed every single minute of it. Fans of the TV shows Dexter, The Following, and even the short-lived Cult will probably enjoy I Hunt Killers. Ultimately, I’m giving this one 4.5 Stars. Have you read I Hunt Killers? What did you think? Let me know!