All Things Halloween Review - A Darkness Strange and Lovely 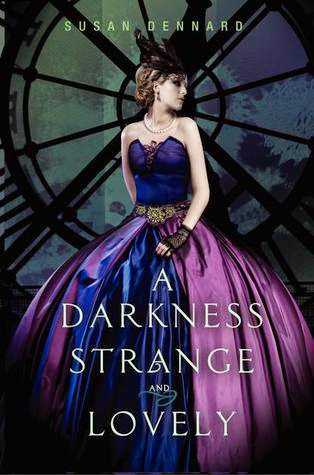 Source: Won in a giveaway

Goodreads description--Darkness has come to the City of Light...

With her brother dead and her mother on the verge of insanity, Eleanor Fitt is utterly alone. Even the Spirit-Hunters—Joseph, Jie, and the handsome Daniel—have fled to Paris. So when Eleanor begins to hear the vicious barking of hounds and see images of haunting yellow eyes, she fears the worst—that the Dead, and the necromancer Marcus, are coming for her.

To escape and search out the Spirit-Hunters, Eleanor boards a steamer bound for France. There she meets Oliver, a young man who claims to have known her brother. Though friendly, Oliver entices Eleanor with necromancy and black magic, yet as long as she can resist his powerful temptation, she'll be fine. But when she arrives in Paris, she finds that the Dead have taken over the city...and there's a whole new evil lurking. With the body count rising, Eleanor is forced to make a deadly decision that will go against everything the Spirit-Hunters stand for.

In Paris, there's a price for this darkness strange and lovely...and it may have Eleanor paying with her life.

In this spellbinding sequel to Something Strange and Deadly, Susan Dennard delivers a thrilling mix of intrigue, romance, and revenge, all set against the wonderfully enchanting backdrop of nineteenth-century Paris.

I started off A Darkness Strange and Lovely feeling really bad for Eleanor. Her only friends have moved to Paris, France. Her brother is dead and his body is possessed by a dead necromancer. Her friend Clarence died at her brother’s hands. She is alienated from all of her old friends from prior to meeting the Spirit Hunters. And her mother has pretty much lost all the marbles she had left and gone insane. Eleanor is broke and having to sell off her family’s possessions one at a time—furniture, dresses, everything. Daniel told her before leaving for Paris that he wasn’t in love with her. Oh and she had her hand amputated. Needless to say, things just aren’t going well for her at all.

When Marcus (the dead necromancer possessing her brother’s body) threatens Eleanor again, she knows that she can’t take him on alone. She needs the help of the Spirit Hunters and so she takes what little money she has left and buys herself a ticket on a ship to France. During the process, we learn that Eleanor is being pursued by the guardians that keep watch over the veil between the Spirit realm and the physical realm. In an act of desperation Eleanor ends up binding herself to being of dark magic—Oliver. The description kind of led me to believe that Eleanor might start to develop feelings for Oliver which would put us into that lovely relationship shape that everyone complains about (love triangle). But that’s not really the case so no worries if that’s one of the things holding you back from starting this book. Oliver and Eleanor do develop a bond and a friendship of sorts, but it isn’t romantic.

Because Oliver is a being of dark magic, Eleanor keeps getting pulled into her own bits of necromancy. She begins to taste of the darkness that is both strange and lovely and thus begins down a dangerous slope that could get out of control at any moment. She feels the draw to use more and more magic despite the consequences. Eventually she arrives in Paris, but she decides to keep her relationship with Oliver and her dabbles with black magic a secret from the Spirit Hunters because she knows they would not approve. But things aren’t always in black and white.

Of course, the Spirit Hunters HAVE to find out that Eleanor has been keeping secrets and lying to them. And she begins to alienate the only friends she has left. Still, I felt bad for Eleanor. She’s been through so much, and her friends don’t take much time to listen to her. But yet, I saw her making stupid decision after stupid decision.

The main villain of this book wasn’t much of a secret. As a matter of fact, almost everything that happened felt obvious to me which was a bit of a drag. I like being able to predict what’s going to happen…sometimes. But not all the time. And I LOVE when a book can surprise me. By the time I ended A Darkness Strange and Lovely I felt kind of “meh” over the whole thing. However, given a day of separation from it I found myself craving to go ahead and pick up Strange and Ever After so I could see how it would all end. As frustrated as I was with Eleanor’s choices and the predictability, something was pulling me back to this series.

I have to say that I’m getting a little bored with the typical trilogy arc and I sometimes feel like I should just skip book 2 altogether. Book 1 is the build up, and Something Strange and Deadly was definitely better to me than A Darkness Strange and Lovely. Book 2 is the lull—the filler—the bridge from book 1 to book 3. And well book 3 is where the overall arc gets the ultimate climax and resolution. So yeah…A Darkness Strange and Lovely definitely fell into this pattern. But here’s to hoping for that big climax and resolution in book 3, Strange and Ever After.