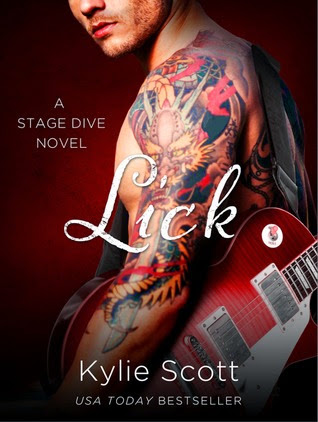 Source: Borrowed from my Holly @ Words Fueled by Love

Goodreads description--Waking up in Vegas was never meant to be like this.

Evelyn Thomas's plans for celebrating her twenty-first birthday in Las Vegas were big. Huge. But she sure never meant to wake up on the bathroom floor with a hangover to rival the black plague, a very attractive half-naked tattooed man in her room, and a diamond on her finger large enough to scare King Kong. Now if she could just remember how it all happened.

One thing is certain, being married to one of the hottest rock stars on the planet is sure to be a wild ride.

With a title like Lick, I can’t say I was expecting much out of this book. I looked like the typical new adult book. And there were definitely aspects of Lick that were cliché and lived up to the typical new adult patterns. I’ve discussed multiple times that my expectations play into my overall experience of a book. If my expectations are high sometimes I feel even more letdown by the book than I would under other circumstances. Expectations certainly played a part in my overall experience of Lick but because those expectations were on the low end of the scale this ended up being a good thing for the book. I wanted a book that would hook me and that I could read quickly without getting too bogged down, and Lick was a nice fit for that.

The “oh crap we got married while I was drunk in Vegas” concept isn’t original, but I liked that while David had been drinking, he knew exactly what he was doing when he signed up to marry Evelyn. I’ve never been a drinker and so the concept of completely losing an entire night’s worth of memories is so foreign to me. Obviously that has to be possible or there wouldn’t be so many books and movies about it, but because I’ve never experienced it, I find the whole thing a little far-fetched. But this entire story isn’t exactly supposed to be realistic.

Evelyn, obviously, freaks out to wake up and find out that she’s married. This is compounded by the fact that David is the lead guitarist in an extremely popular band. Because David is famous, the paparazzi begin to follow Evelyn wherever she goes. Evelyn is whisked off to be with David until they can get the marriage annulled and until the paparazzi find another story upon which to focus their attention. Since David went into the marriage with eyes-open he’s not exactly thrilled with Evelyn’s desire to dissolve it. Evelyn can’t really understand why, but the thought of never seeing David again leaves her cold. So they decide to try to figure things out and not make any additional rash decision.

Evelyn is described as being curvy—not a size 0. I liked that she was more average in body shape and that David was attracted to her anyway. She’s borderline with her self-esteem, but while she’s with David focusing on her body-image issues is difficult. David wants this relationship. He is prone to throwing mini-temper tantrums though. And the two in combination have a relationship that crossed into the unhealthy, potentially abusive zone—yet this didn’t bother me too much. *shrugs* Evelyn impressed me with her ability to remain fairly objective despite David’s temper tantrums, but of course she appropriately jumps to her own conclusions when we hit the 70% conflict mark that so often happens.

Said conflict is clichéd and a bit too easy. It was like there had to be something bad happen so let’s just make this particular event occur and then we’ll call it a day. **Spoiler alert** The fact that David’s ex-girlfriend kisses him, Evelyn happens to walk in at the exact moment it happens and assumes that David must have something going on with Martha was just too easy. I think the better, and even more realistic conflict choice, would have been David’s inability to let go. He still holds onto the house that he bought with Martha in mind. He still wears the earring that’s paired with hers. There’s a deeper issue there. However, for book purposes I guess that would be too simple to fix. Not that offering up a “she kissed me” explanation isn’t simple as well. **End spoiler**

As I said, there were some clichéd moments that offered some frustration. David and Evelyn have a borderline unhealthy relationship. And the conflict and resolution was too easy. But overall, I actually got sucked into this entire story. I was rooting for these two. And I found myself liking all of the characters for the most part (minus Martha and maybe Ben). I wanted to go back to Lick when I had to put it down, and I’ve been wondering about the other characters since finishing it. All this leaves me feeling like Lick deserves a 4 star rating. Have you read Lick? What did you think? Let me know!