So we got up and got on the road Sunday morning. I was praying the whole way for a safe trip. Check out these clouds I took a picture of on the drive. I've never seen clouds like this. 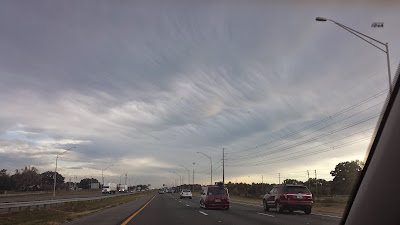 We got to the hotel about 6:00 p.m. Then we walked around Ybor City (where we were staying, a couple of miles from downtown Tampa). And can I just say that I am a total country girl. Cities are WEIRD! The people were weird. The stores were weird. We ate pizza at this place, but it was just a very odd experience for me. They had really good pizza though--I wish I could remember the name of the restuarant. I’m definitely not made for the city though. We got back to the hotel and watched some TV. We hoped the hotel would have AMC so we could watch The Walking Dead, but they didn’t have that channel. 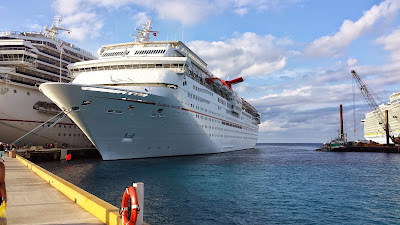 We got up Monday morning, ate breakfast at the hotel. We did their Park & Cruise package so we were able to leave our car at the hotel while we were on the cruise, and the hotel shuttled us back and forth to the cruise terminal. We got on the boat (Carnival Paradise) by about 11:45 a.m. or noon. We weren’t supposed to board until after 1:00 p.m., so it was nice to get on early. There was a guy who was totally wasted already on the boat. That was an experience just watching him and the poor crew member that got sucked into having to help take care of him. The boat left Tampa about 4:00 p.m. 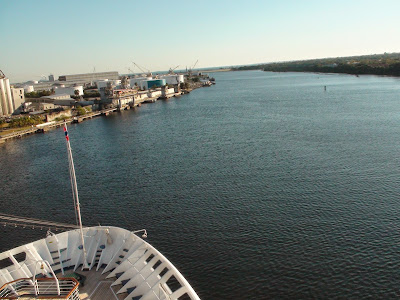 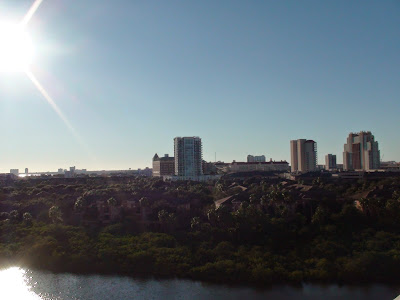 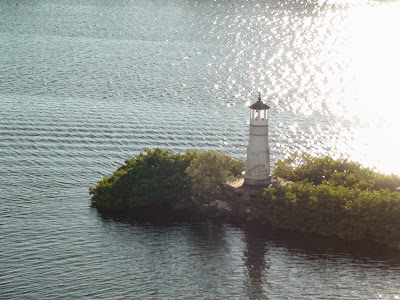 Tuesday we were at sea all day. We sat out on the deck for a little while. Went to dinner. There were 6 people to our table (including us). There was this lady and her daughter from Tennessee. We really clicked with them. And then there was this couple from Boston that we didn’t click with so much. They were nice enough, but they only came to dinner the first two nights. Tuesday night was the “captain’s night” so we dressed up that night for dinner and took some pictures, but the pictures didn’t turn out that great. We went to see the comedians that night and went to the show which was a “country” show--being from the South, I can attest that the show was NOT country as I know it, but that's okay. 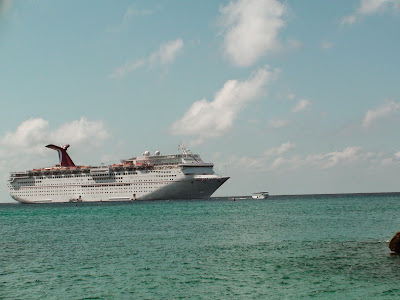 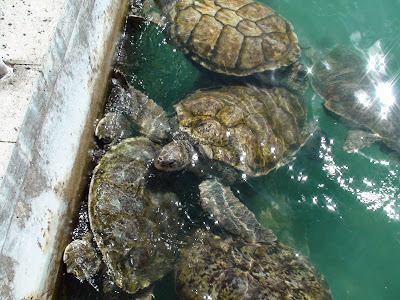 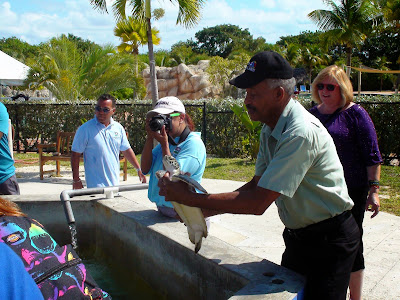 Got to Grand Cayman at 8:00 a.m. Wednesday. We had a tour scheduled for there. Stopped by this turtle farm and the turtles were SO HUGE! I wish you could tell from the picture how big they are, but you really can't. Our tour guide, his name was Black--for real--was really good. He knew what almost every condo on the island had sold for and seriously nothing was sold on that island for under a million dollars. Everything was more expensive there. Gas is like $7 a gallon. CRAZY! That's a picture of our guide holding one of the smaller turtles. 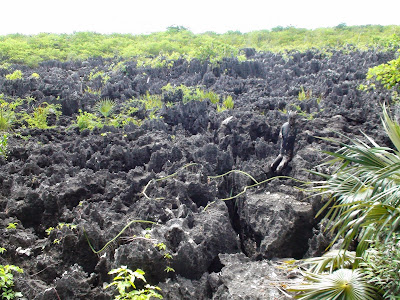 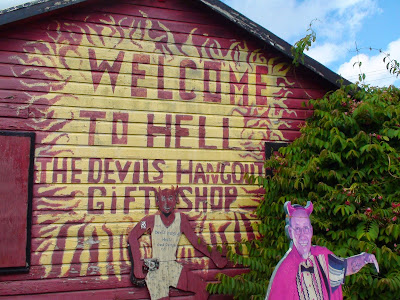 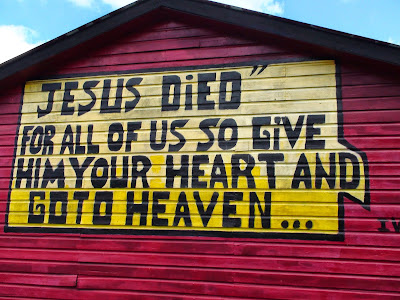 Then we stopped at this town called “Hell”. There’s a tiny gift shop there where you can get your passport stamped and you can send postcards from “Hell”. Behind the gift shop there is this crazy rock formation that just seems to have come out of nowhere. It’s really creepy looking. Then we went to a rum factory. I didn’t even realize that was part of the trip--we don't drink. But it was fine. We got back on the boat after that and left Grand Cayman about 4:00 p.m. We went to dinner that night, but there weren't really any shows going on that night.

We docked in Cozumel on Thursday about noon. They didn’t let us off the boat until about 12:30 p.m. When we pulled into port there was a ship from the Royal Caribbean line next to us called Oasis of the Seas. It was HUGE! It had 8 floors of balcony rooms. And the inside of the ship was open and there were balcony rooms on the inside of the ship. It had one of those rock walls and wave pools. It looked fun, but it also looked intimidating. That boat had to house over 4000 people easy. I looked it up...it has....EIGHTEEN DECKS and a friggin' ice rink! 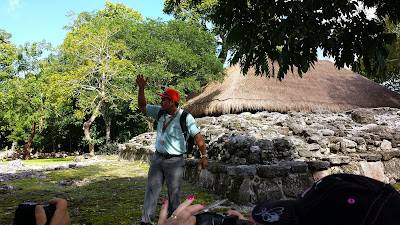 Our tour guide for Cozumel, Alen, was hilarious. He was speaking in Spanish mostly at first and Husband and I were like “um…he does realize that we don’t speak Spanish, right?” And so he asks us if we speak Spanish and we’re like “no.” And he’s like “Taco? Burrito? Enchilada?” And we’re like “Okay maybe a little Spanish.” And he was cracking jokes the whole time. This one lady was like “Oh there’s a buzzard,” and he says, “No no, that’s a Mexican flamingo.”

Turns out that he was actually mixed Mayan and Mexican. His grandfather was Mayan, and that was actually the first language he learned, then Spanish. Then when he was 14 his mom sent him to America to learn English. But she sent him to California where everyone speaks Spanish. So after 3 months she sent him to Michigan. He then studied archaeology in school (husband thinks he's still in school for archaeology, but I'm pretty sure he's finished with school), so he was telling us about the Mayan ruins both from what he’s studied in school and from what his grandfather told him. Turns out that there were about 6000 Mayan civilizations/temples, and Cozumel was the only one that didn’t do human sacrifices because the island was dedicated to fertility, so it was about life and not death. 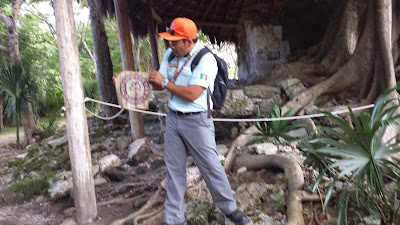 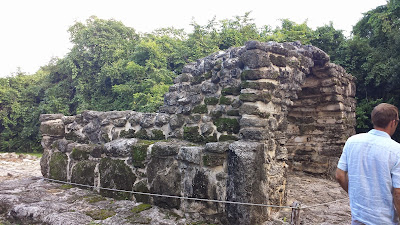 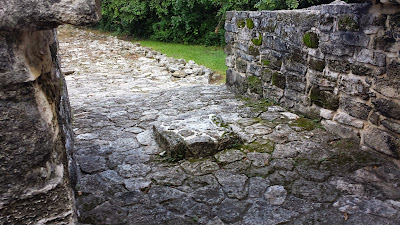 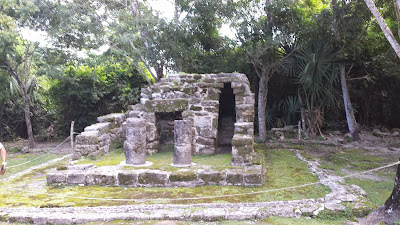 I got ATE UP by mosquitos. And I’m still itchy! If you ever go to Cozumel, take some mosquito spray with you. 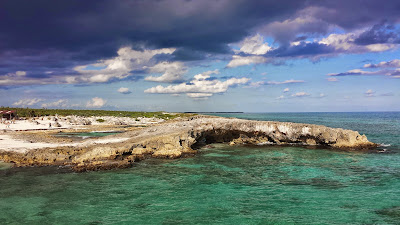 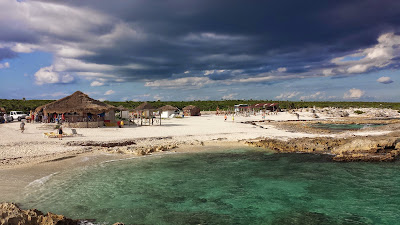 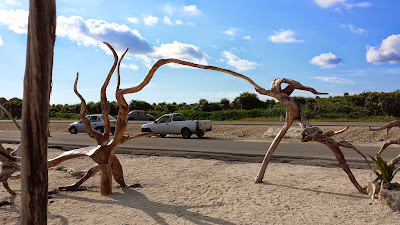 We left the Mayan ruins and drove to the East side of the island. Apparently the entire island all lives in the west side in one city, and the rest of the island isn’t really populated and doesn’t have electricity because the hurricanes hit that side of the island. It was really underdeveloped and beautiful, but Alen told us that the government plans to build and Donald Trump is also trying to build some hotels, so if you want to see Cozumel before it's too commercialized then now is the time. We stopped at this beach on the east side of the island and it was beautiful. We got some really good pictures from there. Then we got back on the boat. We ate dinner that night and then sat out on the back of the ship for several hours as we left Cozumel. 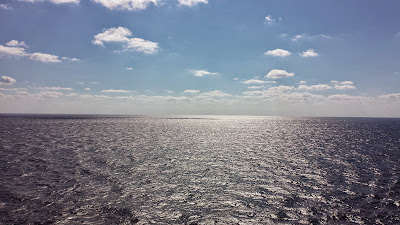 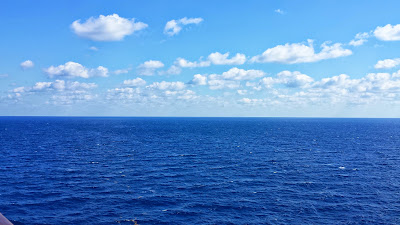 Friday we were at sea all day. Husband and I sat on the top deck for about 5 hours or so. It was beautiful out there. But the clouds were starting to pick up and it was getting super windy. So we went inside to eat lunch. While inside it was easy to see how much the ship was rocking. We couldn’t tell that much on deck. So we went to the room to lay down because I felt bad. And it just got worse and worse. We couldn’t even go to dinner. I hated that because we wanted to say goodbye to the older ladies we were eating dinner with, but I couldn’t even imagine walking the halls to go eat. Husband ended up vomiting a couple of times he got so sick. BUT he had been on antibiotics the whole trip for a sinus infection so I think that played into it. We had the TV on but couldn’t even look at the screen. I’ve just never been on a cruise where the boat rocked that much. Anyway…at 10:30 p.m. we pulled it together long enough to pack our luggage and put it in the hall. 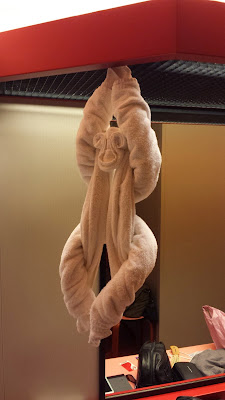 Saturday morning we docked about 8:00 a.m. in Tampa. Our section didn’t get called to get off the boat until about 10:00 a.m. We made it through customs and into the garage for pick up to be taken back to the hotel to get our car. But we got on the wrong shuttle. We got on the shuttle for Hampton Inn in Westshore, not Hampton Inn in Ybor City. So we had to come back to the cruise terminal to get picked up by the correct shuttle. We were on the road home by 11:45 a.m. time and drove about 8 hours back home.

So that was it! Have you ever been to Grand Cayman or Cozumel? What were your favorite parts? Ever been on a different cruise line besides Carnival? Husband and I are interested in trying out a different cruise line. We've sailed Carnival multiple times (4 times for him and 3 times for me) and never had a problem, but we just want to know about the other lines? What do you guys think? Let me know!